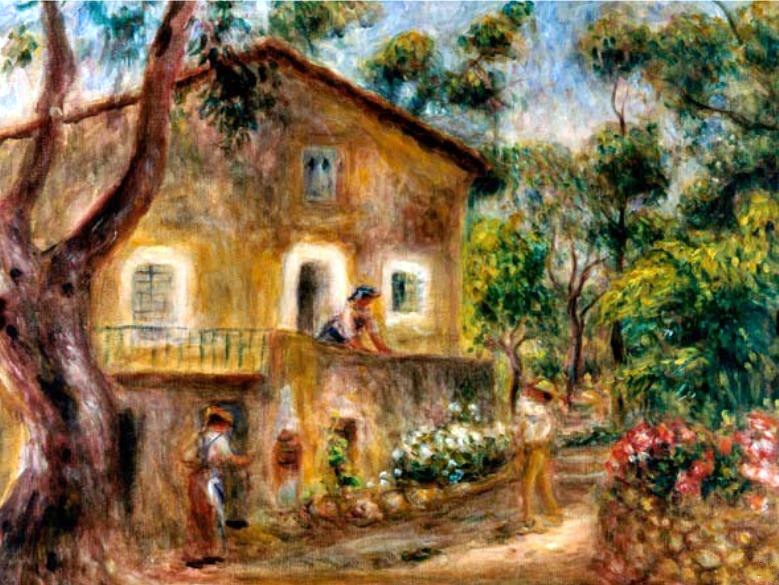 “Collette’s House in Cagnes” by Pierre-Auguste Renoir was painted by Renoir at the age of just over 70-year-old, during a time when Renoir lived at a farm on the hill Les Collettes in Cagnes-sur-Mer, the area he lived in until his death.

The warmth of Renoir’s style made his paintings some of the most famous works in the history of art. Renoir used the trees as a visual screen to integrate the foreground and background space.

In 1907 Renoir purchased the estate of Les Collettes at Cagnes on the Mediterranean near Nice. The estate included a farmhouse with olive and orange tree groves.

The property provided views of the hilly countryside and provided Renoir with significant motifs for his late landscapes.

This painting was fluidly executed and suffused by the bright light of southern France and is one of several representations of the farm painted between 1908 and 1914.

Renoir lived at La Ferme des Collettes with his family from 1908 until he died in 1919. Renoir moved to Cagnes-Sur-Mer for the warm climate, in the hopes that it would improve his arthritis, which eventually confined him to a wheelchair.

The house in which he spent the last 12 years of his life is full of citrus and olive trees, looking out along the coastline to the Cap d’Antibes. Today the house is a Museum of his time at the estate.

As one who celebrated beauty and uniquely feminine sensuality, Renoir’s paintings are notable for their vibrant light and saturated color, most often focusing on people in intimate and candid compositions.

At the age of 51, Renoir developed rheumatoid arthritis, which in his last twenty years of his life, severely limited his mobility. He developed progressive deformities in his hands and ankylosis of his right shoulder, requiring him to change his painting technique.

Renoir remained positive and passionate about his art and did not let his condition affect his painting or diminish the beauty that he saw around him. In the advanced stages of his arthritis, he required an assistant to place his paintbrush in his hand.

His hands were also wrapped with bandages to prevent skin irritation. Renoir applied a variety of effective coping strategies and used his ingenuity to come up with different ways to continue painting even as his arthritis weakened him.

“I’ve been 40 years discovering that the queen of all colors was black.”

“I’ve been 40 years discovering that the queen of all colors was black.”

Why shouldn’t art be pretty? There are enough unpleasant things in the world.