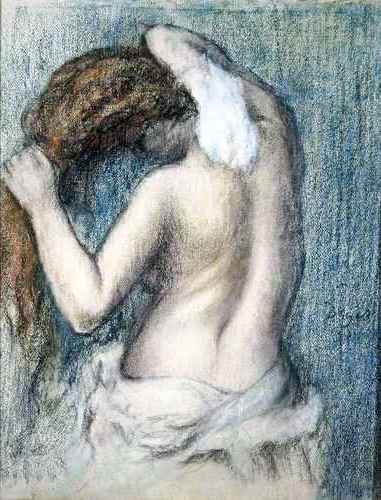 “Woman Washing” by Edgar Degas depicts a female bather washing the back of her neck with a washcloth.  This pastel drawing is part of a series of drawings, preliminary sketches in pastels and oils by Degas that depict women bathing.

Degas often used sketches as a preliminary step to study the light and the composition for his paintings. This work is part of a series of drawings in pastels which depict women bathing, some showing women in awkward, unnatural positions.

Degas, said, he intended to create a feeling in the viewer:

Degas examined the human figure with its many nuances and possibilities in his series of nude bathers.

Degas set up tubs and basins in his studio and asked his models to go through their usual routines during their baths and personal care.

He captured them in their natural poses and from different perspectives to revealed new possibilities in his composition. Degas has created an intimate and spontaneous piece of art that captures the dynamic act of bathing.

He is regarded as one of the founders of Impressionism, although Degas rejected the term, preferring to be called a Realist. He was masterly in depicting movement, as can be seen in his various masterpieces of dancers, racecourse subjects, and female nudes.

“It is true. There is someone who feels as I do.”

“We were created to look at one another, weren’t we.”

“Art is vice. You don’t marry it legitimately; you rape it.”

“What a delightful thing is the conversation of specialists! One understands absolutely nothing, and it’s charming.”

“And even this heart of mine has something artificial. The dancers have sewn it into a bag of pink satin, pink satin slightly faded, like their dancing shoes.”

“So that’s the telephone? They ring, and you run.”

“Art is not what you see but what you make others see.”

“I want to be famous, but unknown!”

“A painting requires a little mystery, some vagueness, and some fantasy. When you always make your meaning perfectly plain, you end up boring people.”

“Success! Success! The enemy of progress!”

“Muses work all day long and then at night get together and dance.”

“Art critic! Is that a profession? When I think we are stupid enough, we painters, to solicit those people’s compliments and to put ourselves into their hands! What a shame!”

“Should we even accept that they talk about our work?”

“Art is not what you see, but what you make others see.”
– Edgar Degas