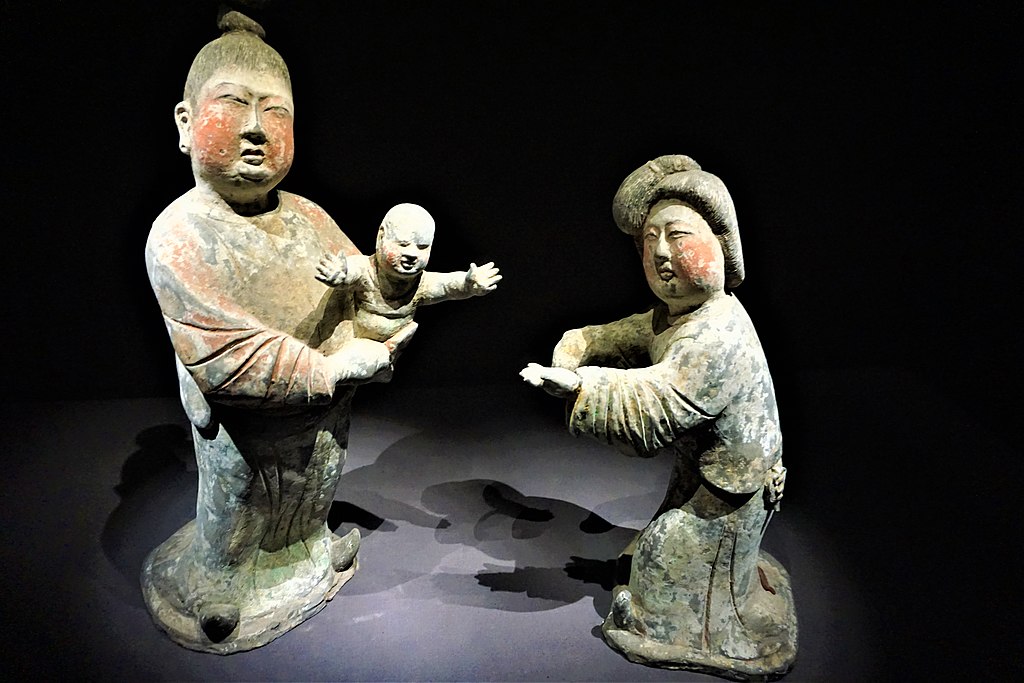 These painted pottery figures of father and mother with a child are from about 618 – 907 CE in the Tang Dynasty. They represent Tang dynasty tomb figures made of pottery as grave goods to be placed in tombs. There was a belief that the figures represented would become available for the service of the deceased in the afterlife. The figures are made of molded earthenware with color added. These figures show the dress and hair code of the period and are represent in robust good health from the look of their faces.

These Four Female Musicians are representative of the servants and attendants such as dancers and musicians that were included in the burials of people of high rank. Many figures included servants, soldiers, and officials. The depictions are realistic to a degree unprecedented in Chinese art, and the figures provide archaeologists and historian with useful information about life under the Tang.

These Six Female Musicians represent the development of earlier traditions of Chinese tomb figures. A thousand years before the Tang figures, a tomb from 433 BC contained the bodies of 22 human musicians, as well as the instruments they played. The First Emperor’s Terracotta Army burial also involved the killing and burial of many servants and animals. Later, the excavated Han dynasty tombs contained bronze or pottery figures of horses, and often groups of soldiers, less than life-size, in the tombs of commanders. Lower down the social scale, pottery models of houses and animals were widespread and continued into the Tang. By the time of the Sui dynasty (581–618), the pattern of Tang tomb figures was essentially established, though the polychromy of colors did not appear until the Tang. 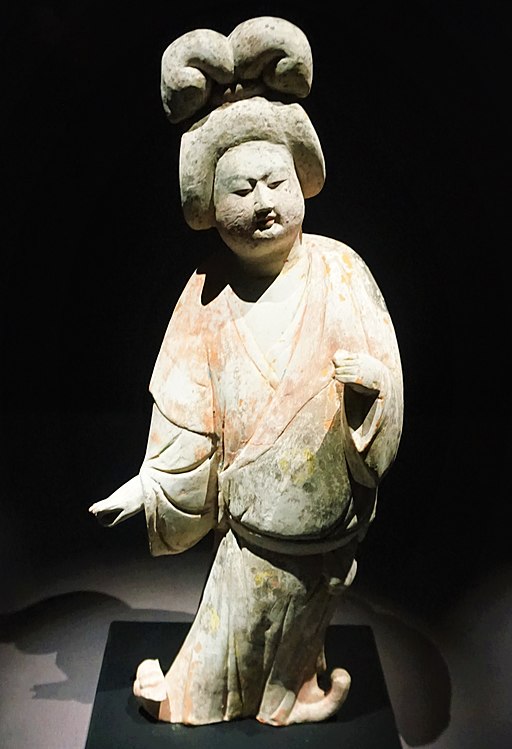 This figure of a Court Lady was from the period when a plumper figure had become the norm, with faces that are fat and heavily with a blank gaze. Earlier representations of women were tall and slim; this change in taste was provoked by a famous imperial concubine, who had a full figure. This period was one of greater freedom for well-off women in China, and the figures reflect this.

Tang figures were not of much interest to traditional Chinese collectors of pottery, and because they were made specifically for use in burials, they were considered unlucky. However, these figures are now highly popular exhibits in museums.

Tang Dynasty Tomb Figures became extremely popular with Western collectors from about the 1910s, especially figures of horses. However, from about the late 1990s, there were many fakes on the market which created uncertainty. More recently there has been an upsurge in discoveries of ancient treasures as construction in China has boomed.

The Tang dynasty was an imperial dynasty of China spanning the 7th to 10th centuries. Historians generally regard the Tang as a high point in Chinese civilization, and a golden age of cosmopolitan culture. The Tang capital at Chang’an, present-day Xi’an, was the most populous city in the world in its day.

Many innovations occurred under the Tang, including the development of woodblock printing. Buddhism became a significant influence in Chinese culture, with native Chinese sects gaining prominence during this period.