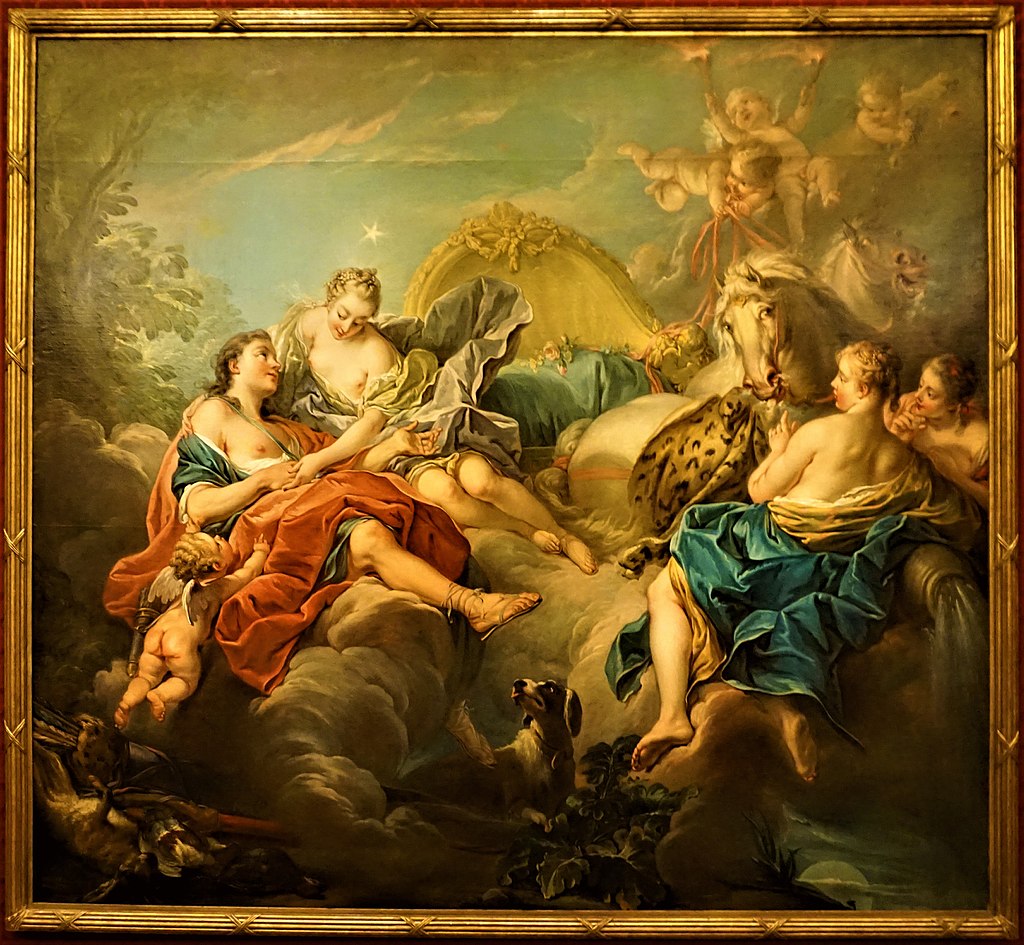 “Aurora and Cephalus” by François Boucher

“Aurora and Cephalus” by François Boucher depicts Aurora, the goddess of dawn, waking up the mortal Cephalus from sleep.

According to Roman mythology and Latin poetry, Aurora has fallen madly in love with Cephalus and who is one of her human lovers.

In this Rococo masterpiece, the blue sky is tinged with pink, and the dawn can be seen with the light above her head. Furthermore, Aurora’s etherealism or heavenly aspects are symbolized by her chariot, her flying horses, and the cherubs.

Especially relevant is Cephalus’s mortality and roots to earth, which is signified by his dog, and his hunting catch in the bottom left.

Aurora is the Latin word for dawn and is the goddess of dawn in Roman mythology, and she renews herself every morning and flies across the sky, announcing the arrival of the sun.

Aurora appears most often in Latin sensual poetry with one of her mortal lovers. Cephalus is a name used for the hero-figure in Greek mythology and was one of the lovers of the Greek dawn goddess. 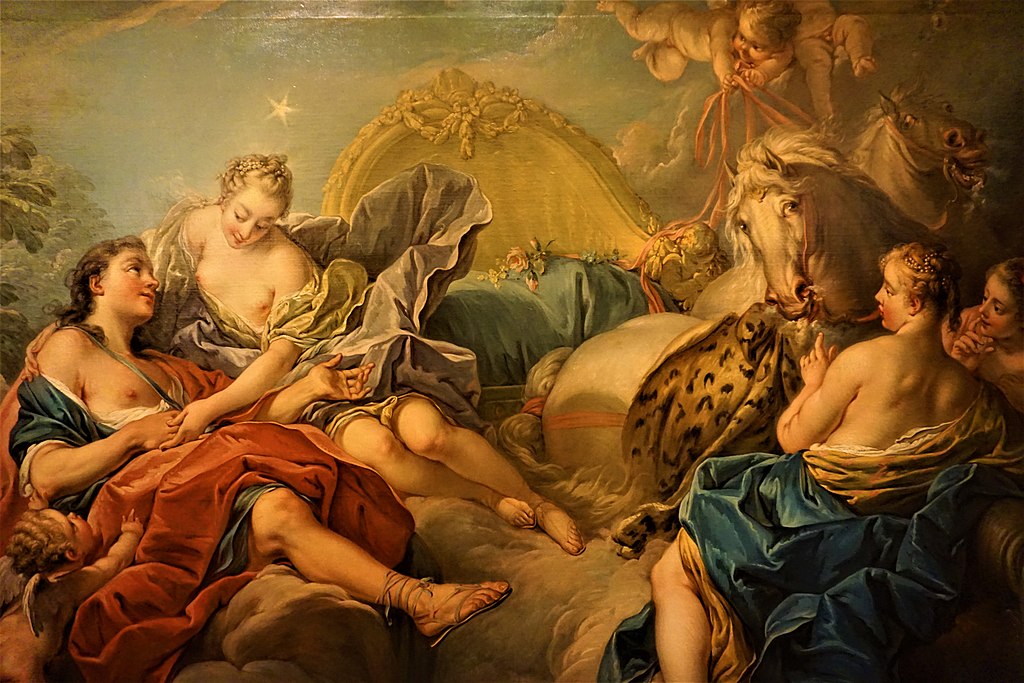 François Boucher was a French painter who worked in the Rococo style. Boucher is known for his idyllic and voluptuous paintings and was perhaps the most celebrated painter and decorative artist of the 18th century.

More importantly, for the time, Marquise de Pompadour, the mistress of King Louis XV, was a great admirer of his work.

As a result, Boucher painted several portraits of his patroness, Madame de Pompadour, who is often called the “godmother of Rococo.”

Rococo was a decorative 18th-century style that exaggerated the principles of illusion and theatricality.

This effect achieved by ornamentation, asymmetry, fluid curves, and the use of pastel colors with gilding.

The Rococo style of architecture and decoration began in France, in the reign of Louis XV as a reaction against the more formal and geometric.

Aurōra is the Latin word for dawn and the goddess of dawn in Roman mythology. Like Greek Eos and Indian Ushas, Aurōra continues the name of an earlier Indo-European dawn goddess.

In Roman mythology, Aurōra renews herself every morning and flies across the sky, announcing the arrival of the Sun.

Aurora had two siblings, a brother Sol, the Sun, and a sister Luna, the Moon. Aurōra appears most often in sexual poetry with one of her mortal lovers.

Cephalus was an Athenian son of Hermes and Herse. His magnificent beauty caused the goddess of the dawn to fall in love with him.

He was eventually carried off and ravished by her. The story carrying off of Cephalus by a goddess was represented on several pediments of Greek Stoa and temples.

“Aurora in a robe of saffron was hastening from the streams of Ocean, to bring light to mortals and immortals.”
– Homer’s Iliad

“But all so soon as the all-cheering sun
Should in the furthest east begin to draw
The shady curtains from Aurora’s bed,
Away from the light steals home my heavy son…”
– Shakespeare’s Romeo and Juliet

“But when Aurora, daughter of the dawn,
With rosy luster purpled o’er the lawn.”
– Homer, Odyssey

“You cannot rob me of free nature’s grace,
You cannot shut the windows of the sky
Through which Aurora shows her brightening face.”
– James Thomson, Castle of Indolence

An aurora sometimes referred to as polar lights, northern lights (aurora borealis) is named after the Roman goddess of the dawn, Aurora.

An aurora refers to the natural light display in the Earth’s sky, predominantly seen in the high-latitude regions around the Arctic and Antarctic.

A dawn goddess is a deity who is associated with the dawn and has appeared in many ancient religions and myths under various names such as:

A Tour of the Yamazaki Mazak Museum of Art

“Now when Aurora in a robe of saffron was hastening … to bring light to mortals and immortals.”
– Homer’s Iliad