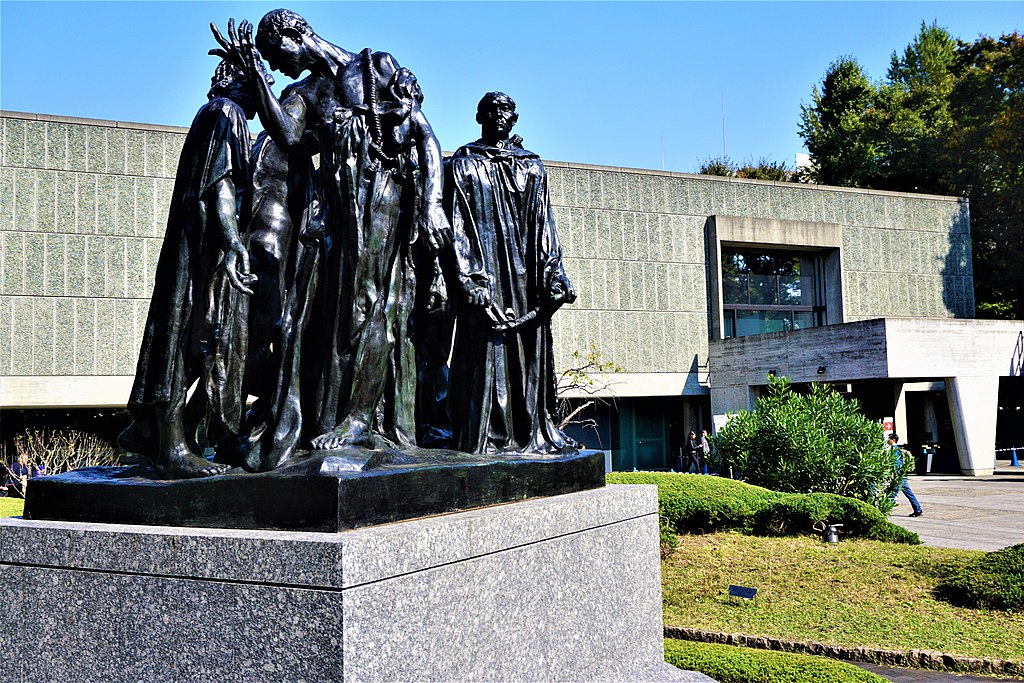 The National Museum of Western Art specializes in art from the Western tradition and is located in the museum and zoo complex in Ueno Park in Taito, central Tokyo. The museum houses about 4,500 works, including examples of painting and sculpture from the 14th through the beginning of the 20th century.

A Virtual Tour of the National Museum of Western Art

Highlights of the National Museum of Western Art

It commemorates a historical incident during the Hundred Years’ War, when Calais, a prominent French port on the English Channel, was under siege by the English for over a year and was eventually forced to surrender.

The Hundred Years’ War was a series of conflicts waged from 1337 to 1453 by England against France, over the succession to the French throne.

Calais overlooks the Strait of Dover, the narrowest point in the English Channel and during this prolonged conflict, England laid siege to Calais.

“Water Lilies” by Claude Monet portrays the water-lily pond, from Monet’s garden in Giverny, with the sky and sun reflecting off the lily pond.

Monet attempted to capture the continually changing qualities of light, color, water, sky, and lilies by dissolving all the elements in:  “the refuge of a peaceful meditation in the center of a flowering aquarium.”

The constant changes in the water surface, based on the direction of the sun during the day, the changing seasons and the changing weather continued to sustain Monet’s interest in his water lilies pond.

The paintings depict Monet’s flower garden at his home in Giverny and were the main focus of Monet’s artistic production during the last thirty years of his life.

Many of the works were painted while Monet suffered from cataracts. His “Water Lilies” paintings can be found in many museums across the globe.

“Saint Michael and the Dragon” by Sienese School

“Saint Michael and the Dragon” by the Sienese School of the 14th century, is a mystical masterpiece depicting a miraculous event in dreamlike coloration.

Saint Michael the Archangel is referenced in the Old Testament and has been part of Christian teachings since the earliest times. He acts as the defender of the Church and chief opponent of Satan; and assists souls at the hour of death.

Saint Michael fighting the Dragon is part of an Apocalypse as related in the Book of Apocalypse or Revelation of St. John.

“Then war broke out in heaven; Michael and his angels battled against the dragon. The dragon and its angels fought back, but they did not prevail, and there was no longer any place for them in heaven.

The huge dragon, the ancient serpent, who is called the Devil and Satan, who deceived the world, was thrown down to earth, and its angels were thrown down with it.”(Rev. 12:7-9).

Waterloo Bridge in London by Claude Monet is a composition in which he deliberately chose to avoid the chaotic rituals of modern London.

The focus is not on the mass of people and traffic rushing around self-focused. Monet preferred a veiled, twilight London, immersed in a deep and silent fog.

Repeated shapes of boats and the round arches of the Waterloo Bridge are evidence that Monet was selective in what he included to create the atmosphere he was seeking.

Monet felt that black had a dulling effect, so instead, he used a color’s complement to darken an area. The scene appears still, but the boats, traffic on the bridge, the river are in motion.

He wanted to depict the feeling or sensation of a view, rather than the objects within the composition.

A Tour of Museums in Japan