Jacques-Nicolas Bellin Map of the Straits of Malacca

“Jacques-Nicolas Bellin Map of the Straits of Malacca,” is a maritime map of Singapore and Governor’s Straits dating to 1755.

This map shows landmarks along the western coast of the Malay Peninsula, including an island named Pulo ou Isle Panjang meaning “Long Island,” which is modern-day Singapore.

The purpose of this map was to provide maritime charts for the French ships that were competing against the British. Jacques Nicolas Bellin was a French hydrographer and geographer.

He was a member of the French intellectual group called the philosophes, and when this map was made, he was head of the French Hydrographic Office. 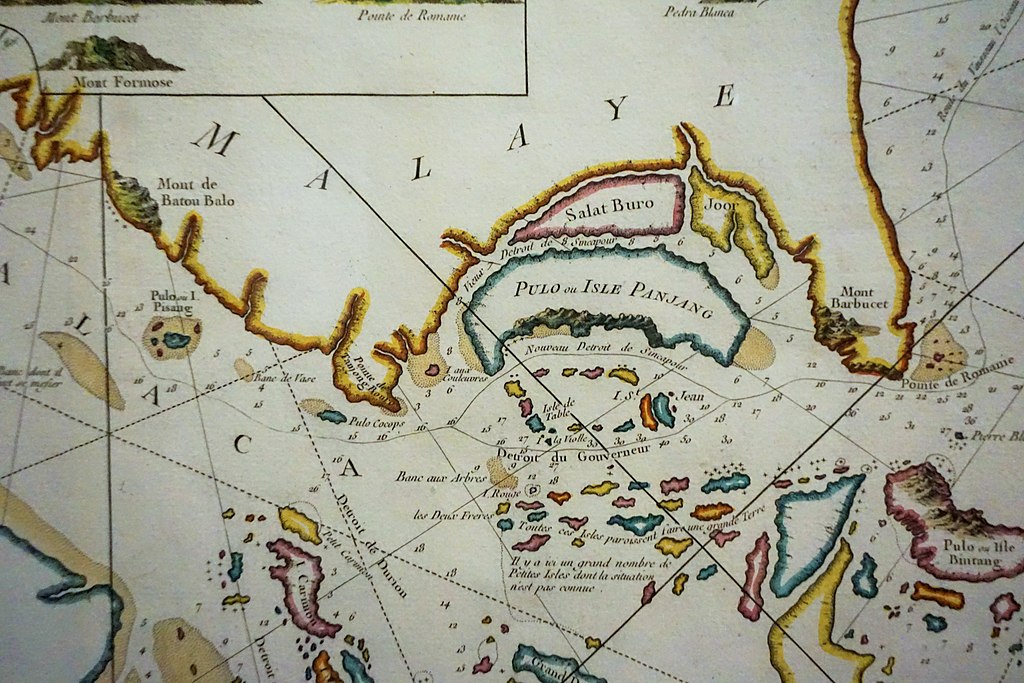 Judging from the inaccurate geographical features of the Singapore island, the island was not of significance to the French at this time.

The map’s focus was as a maritime chart of the sea around Singapore island. This area was strategic, as it connects the South China Sea to the Straits of Malacca, and onwards to the Indian Ocean.

The accurate depiction of waterways south of Singapore was of immense interest. These maps were valuable tools, based on the observations of sailors and were continuously being improved.

The name “Sincapour” appears in the names of the waterways along Singapore Island.

Jacques Nicolas Bellin (1703 – 1772) was a French hydrographer, geographer, and member of the French philosophical group.

Over a 50-year career, he produced a large number of maps, and his maps of Canada and the French territories in North America (New France, Acadia, Louisiana) are historical milestones.

Singapore today is an island city-state in Southeast Asia. It lies at the southern tip of the Malay Peninsula, with Indonesia’s Riau Islands to the south and Peninsular Malaysia to the north.

Since independence, extensive land reclamation has increased its total size by 23%.

After the company’s collapse in 1858, the islands were ceded to the British Raj as a crown colony. During the Second World War, Singapore was occupied by Japan.

It gained independence from the British Empire in 1963 by joining Malaysia along with other former British territories, but separated two years later over ideological differences, becoming a sovereign state in 1965.

After the early years of turbulence, the nation developed rapidly as an Asian Tiger economy based on trade and its strategic location.

The English name of Singapore is an anglicization of the Malay name for the country, Singapura, which was, in turn, derived from Sanskrit word Siṃhapura, meaning “lion” and “town.” Hence the reference to the Lion City, and its inclusion in many of the nation’s symbols.

Jacques-Nicolas Bellin Map of the Straits of Malacca