Melencolia I by Albrecht Dürer

Melencolia I, by Albrecht Dürer, depicts an enigmatic and gloomy winged female figure as a personification of melancholia. Holding her head in her hand, she stares past the busy scene in front of her.

There is also a ladder against the wall and leading beyond the frame. The sky contains a rainbow, a light source, and a bat-like creature bearing the text “MELENCOLIA I.”

Dürer’s engraving is one of the most well-known old master prints, but, without a definitive interpretation. Dürer may have related melancholia with creative activity.

The woman may be a representation of a Muse, awaiting inspiration but gloomy in the prospect that it will not return.

Some art historians see the figure as pondering the nature of beauty or the value of artistic creativity in the light of rationalism. There is little documentation to provide insight into Dürer’s intent.

Albrecht Dürer’s “Melencolia I” has influenced many artists from the sixteenth century to current times.

The print has attracted the interests of artists, poets, writers, historians, and scientists. Its influence has also extended to The Passion façade of the Sagrada Família, which contains a magic square based on the magic square in Melencolia I. 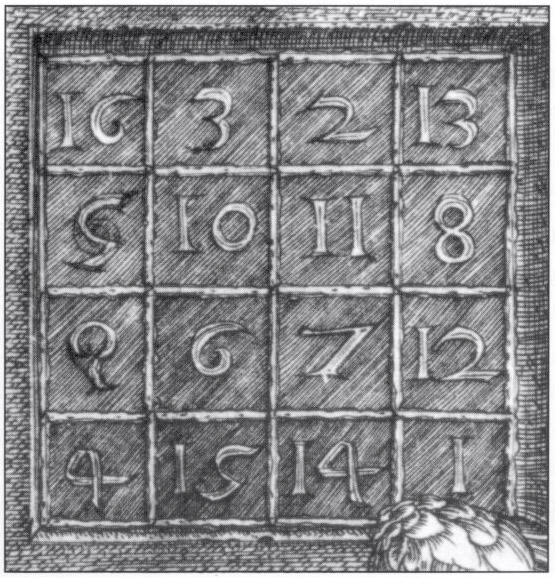 On the face of the building is a 4×4 magic square, the first printed in Europe. The two middle cells of the bottom row giving the date of the engraving, 1514, which is also seen above Dürer’s monogram at the bottom right step.

The square follows the traditional rules of magic squares: each of its rows, columns, and diagonals adds to the same number, 34.

The unusual solid that dominates the left half of the image is a truncated rhombohedron.

This shape is now known as Dürer’s Solid, and there have been numerous analyses of its mathematical properties.

Melancholia is a concept from ancient and pre-modern medicine. Melancholy was one of the four temperaments matching the four humors.

During the later 16th and early 17th centuries, a curious cultural and literary cult of melancholia arose in Europe. The origins of this interest in melancholy can be traced to the humanist Marsilio Ficino (1433–1499), who replaced the medieval notion of melancholia into the mark of genius.

Dürer’s Melancholia I: How Math and Art can heal

“Melancholy is the happiness of being sad.”
– Victor Hugo