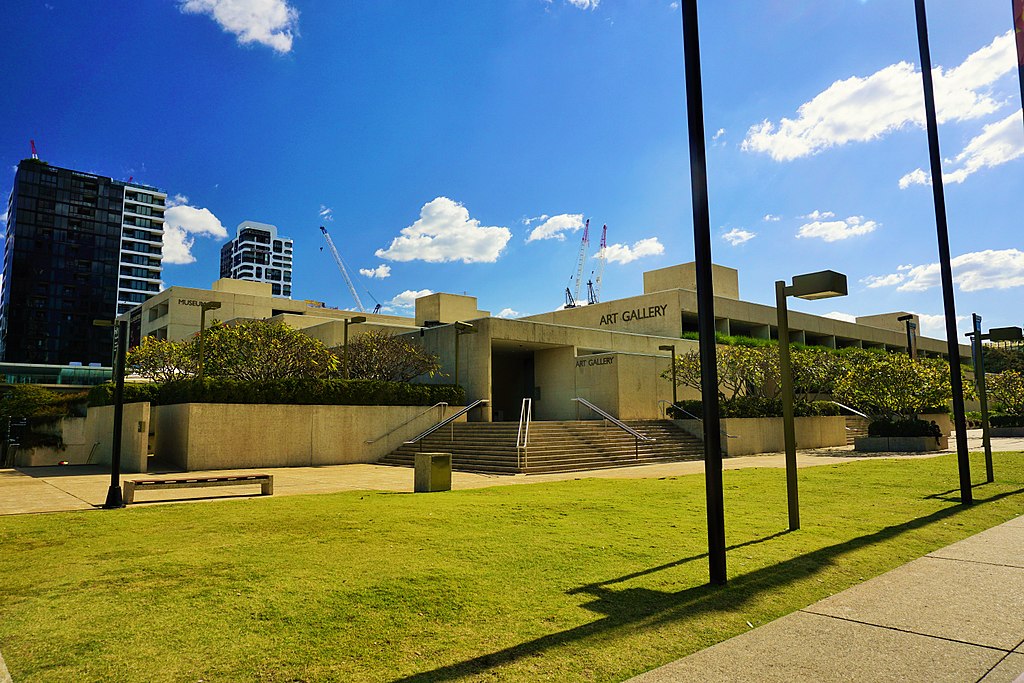 The Queensland Art Gallery (QAG) is an art museum located in the Queensland Cultural Centre and is complemented by the Gallery of Modern Art (GOMA).

A Virtual Tour of the Queensland Art Gallery

This “Li” is a Chinese Tripod Jar dating more than 4,000 years ago. Tripod vessels appear in China in the early Neolithic period of 7000 BCE. The innovation of hollow legs, creating Li (鬲) tripods, occurred during the middle Neolithic from 5000 BCE.

Historians ascribe significance to the shape of the tripod legs as being suggestive of goats’ or cows’ udders and, therefore, crucial for rituals.

Pottery as cooking or storage vessels, made of clay and hardened by heat, was the first functional art to emerge during the Paleolithic.

At the time, this masterpiece was created, ceramic technology-enabled vessels such as this to be placed directly in a fire without cracking.

Takahashi Hiroaki also was known as Shōtei (高橋松亭) was a 20th-century Japanese woodblock artist in the shin-hanga art movement.

Takahashi Hiroaki was trained in Nihonga or “Japanese-style painting,” which is painting made following traditional Japanese artistic conventions, techniques, and materials.

Takahashi’s work attempts to capture cultural and everyday life. He dedicated much of his time to paintings for exhibitions and illustrations for publications. His nostalgic “Old Japan” art is highly sought after by Western collectors.

“Figure with Parasol, Protect against Snow” by Takahashi Hiroaki

“Figure with Parasol, Protect against Snow” by Takahashi Hiroaki depicts a woman in traditional Japanese winter clothes with Parasol to protect her against the snow, making her way along a fence.

Takahashi Hiroaki also was known as Shōtei (高橋松亭) was a 20th-century Japanese woodblock artist in the ‘shin hanga’ art movement.

In 1907, as a successful artist, Takahashi Hiroaki was recruited by Shōzaburō Watanabe to contribute to the ‘shin hanga’ or “new prints” art movement in Japan.

Watanabe helped to fulfill the Western demand for Ukiyo-e woodblock prints, which were similar to the historical masters of that genre, including Hiroshige.

In 1923 the Great Kanto earthquake and fire destroyed Watanabe’s facilities, which included all the Shin Hanga woodblocks.

Takahashi had to recreate the designs destroyed in the Great Kanto Earthquake, and he also continued to produce new woodblocks.

“Under the Jacaranda” by R Godfrey Rivers

“Under the Jacaranda” by R Godfrey Rivers shows the artist and his wife, Selina. They are taking tea under the shade of a jacaranda tree that is in full bloom. It is a quintessential image of early Australia.

The location depicted was in Brisbane’s Botanic Gardens and shows the first jacaranda to be grown in Australia, planted in 1864, and flourishing there until it was blown down in 1979.

The majestic jacaranda tree in bloom was captured using the contrast of the green vegetation and the red umbrella to emphasize its distinctive purple of the jacaranda.

With jacarandas now growing in most Australian suburbs, many of them are the progeny of this first tree.

“Bathing Hour” (L’Heure du Bain) by E. Phillips Fox depicts a beach scene from France’s Channel Coast. Fox was living in Paris when he painted this painting depicting a resort frequented by the middle classes.

This painting is unusual in some respects. Public bathing was not common at this time, and it was uncommon for a female child to be exposed in such a way.

This scene is just one of some motherhood scenes depicted by Fox after his marriage in 1905. However, he and his wife Ethel remained childless.

E. Phillips Fox was an Australian Impressionist painter who had a significant influence as a teacher on Australian art during the late 1800s.

When compared with Arthur Streeton and Charles Conder, Fox shows more interest in exploring the effects of light and shadow and not the sunny vistas one finds in the other painters’ Heidelberg paintings.

He is described as an artist who “paid homage to Impressionism while retaining the tonal values of academic realism.”

This Buddha is in the Gandharan or Greco-Buddhist style, and the statue shows influence from Ancient Greek art. Gandhara had been part of the Greco-Bactrian Kingdom established by Alexander the Great.

Gandhāra was an ancient Indic kingdom situated in the north-western region of Pakistan, around Peshawar.

The statue has borrowed characteristics from Greek sculpture, which influenced Asian sculpture with wavy hair, the defined and rhythmic folds of the robe, and the circular nimbus surrounding the head.

“Three Dancers at a Dance Class” by Edgar Degas

The artist’s interest in Japanese woodcut prints influenced the painting’s diagonal composition. The bench is part of an overall layout that allows Degas to explore a variety of poses.

He has composed a seated figure, a figure with a raised leg, and a figure is standing. Ballet classes provided Degas with the opportunity to study the human body during periods of rest and focused activity.

“La Fontaine” was painted by Rupert Bunny, who was a magnificent colorist and erudite painter of classic themes.

This painting is representative of his ambitious Salon paintings. Bunny traveled back and forth between Australia and France on many occasions until 1933, when he returned permanently to Australia and settled in South Yarra, Victoria.

Rupert Bunny (1864 – 1947) was an Australian painter who achieved success and critical acclaim as an expatriate in fin-de-siècle Paris.

He gained an honorable mention at the Paris Salon of 1890 and a bronze medal at the Paris Exposition Universelle in 1900. The French state acquired 13 of his works for the Musée du Luxembourg and regional collections.

Soldiers who don’t know themselves/ A Curator’s Perspective

A Tour of the Museums in Australia

Confronting Contemporary Art: My Child Could Have Done That!