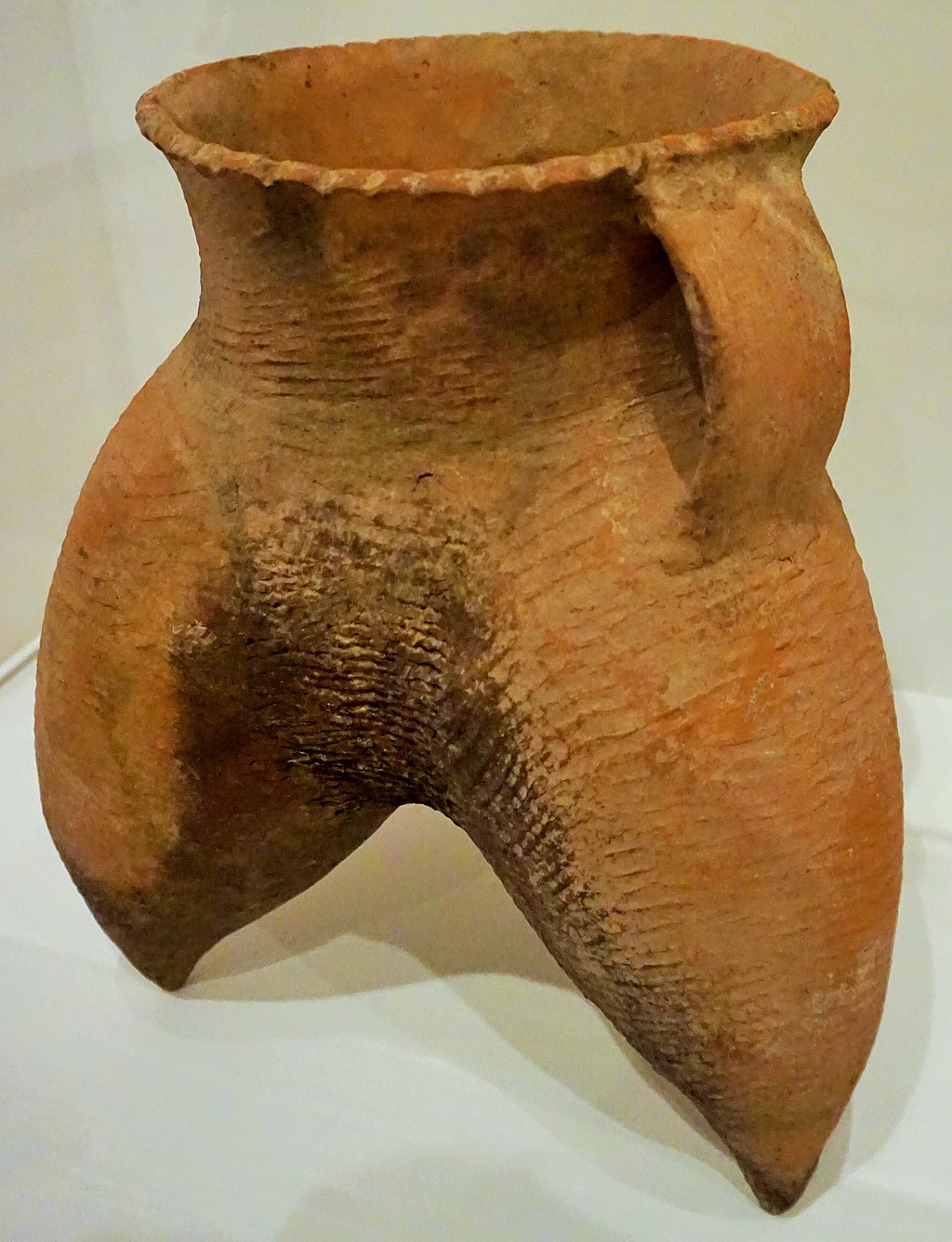 This “Li” is a Chinese Tripod Jar dating more than 4,000 years ago. Tripod vessels appear in China in the early Neolithic period of 7000 BCE. The innovation of hollow legs, creating Li (鬲) tripods, appeared during the middle Neolithic from 5000 BCE.

Historians ascribe significance to the shape of the tripod legs as being suggestive of goats’ or cows’ udders and, therefore, crucial for rituals.

Pottery as cooking or storage vessels, made of clay and hardened by heat, was the first functional art to emerge during the Paleolithic.

At the time, this masterpiece was created, ceramic technology-enabled vessels such as this to be placed directly in a fire without cracking.

The scorching and soot found on excavated examples of Li tripods is evidence that they were placed directly into the fire where their contents could be cooked more effectively than previous vessels.

This shape was popular for many centuries before being replicated in bronze. During the Bronze Age, the form was merged with that of Ding (鼎) tripods to create a hybrid ritual object.

Eventually, the classic udder shape of the Li disappeared, as metallurgy and cooking techniques progressed.

Chinese ceramics show a continuous development since the Neolithic period and are one of the most significant forms of Chinese art.

The first pottery was made during the Palaeolithic era. Chinese Ceramics range from hand-built pottery vessels fired in bonfires or kilns, to the advanced Chinese porcelain wares made for the imperial court and export.

Porcelain is so identified with China that it is still called “china” in everyday English usage.

Pottery dating from 20,000 years ago was found at a Cave site, in Jiangxi province, making it among the earliest pottery yet found.

By the Middle and Late Neolithic, about 5000 to 1500 BCE, most of the more significant archaeological cultures in China were of settled farmer communities who produced a variety of attractive and often large vessels, often boldly painted, or decorated by cutting or impressing.

The decoration was in the abstract or stylized animals. During the 4th millennium, the potter’s wheel seems to have been a Chinese invention, though several regions to the West also claim the honor.

Previously coil-forming was used for large vessels. Ancient Ceramic vessel discoveries are mostly from burial sites, and they sometimes hold the remains of honor ancestors.

Chinese Ceramics: From the Neolithic to the Qing Dynasty

The Spirit and Form of Ancient Chinese Ceramics : Gallery Tour