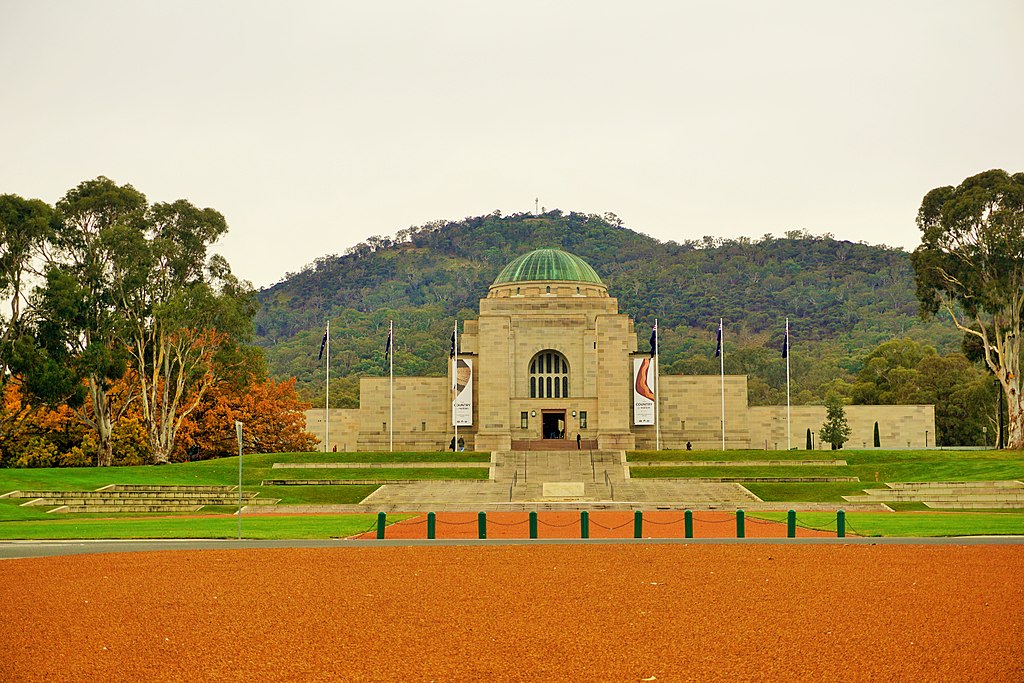 The Australian War Memorial is Australia’s national memorial and museums to the members of its armed forces and supporting organizations who served and sacrificed in wars involving the Commonwealth of Australia.

The Australian War Memorial consists of the Commemorative Area or Shrine, the Hall of Memory,  the Tomb of the Unknown Australian Soldier, the Memorial’s galleries, and the Museum.

Virtual Tour of the National Museum of Australia

This type of LAV-25 Australian Light Armoured Vehicle has been deployed on operations to East Timor, Iraq, and Afghanistan. This exhibit configuration resembles one of 25 LAV’s that served in East Timor in 1999.

This vehicle is known as Australian Light Armoured Vehicles or ASLAVs. Manufactured in Canada, they come in three hull types for a variety of roles, including as an ambulance, recovery, and armored vehicles.

The Bushmaster Protected Mobility Vehicle is an all-wheel-drive mine-resistant vehicle designed and manufactured in Australia and used daily in patrols in Iraq and Afghanistan as a troop carrier for infantry. This exhibit served in both Iraq and Afghanistan.

The Bushmaster is designed to protect its occupants from small-arms fire and withstand blasts from mines and Improvised Explosive Devices (IEDs). It can be configured for command, ambulance, mortar, and assault roles.

This Centurion Tank, No 169056, saw service from October 1970 to September 1971. While in service in the Vietnam War, it had the call sign “5Bravo,” and an enemy RPG struck its barrel and wounded the driver in June 1971.

This Gun Mount is from HMAS Brisbane, which was the second vessel of that name to serve in the Royal Australian Navy. The ship carried two 5-inch gun mounts, and this was the original aft mount.

HMAS Brisbane was one of three Perth-class guided-missile destroyers to serve in the Royal Australian Navy (RAN). She is named after the city of Brisbane, Queensland.

HMAS Brisbane Bridge is from HMAS Brisbane, which was the second vessel of that name to serve in the Royal Australian Navy.

HMAS Brisbane was one of three Perth-class guided-missile destroyers to serve in the Royal Australian Navy (RAN). She is named after the city of Brisbane, Queensland.

During her career, Brisbane made two deployments to the Vietnam War, was involved in the post-Cyclone Tracy disaster relief operation, and deployed to the Persian Gulf during the first Gulf War.

Brisbane was decommissioned in 2001. Her bridge and one of her 5-inch (127 mm) guns were removed and preserved at the Australian War Memorial. The striped ship was then sunk as a dive wreck off the Queensland coast in 2005.

The Hall of Memory