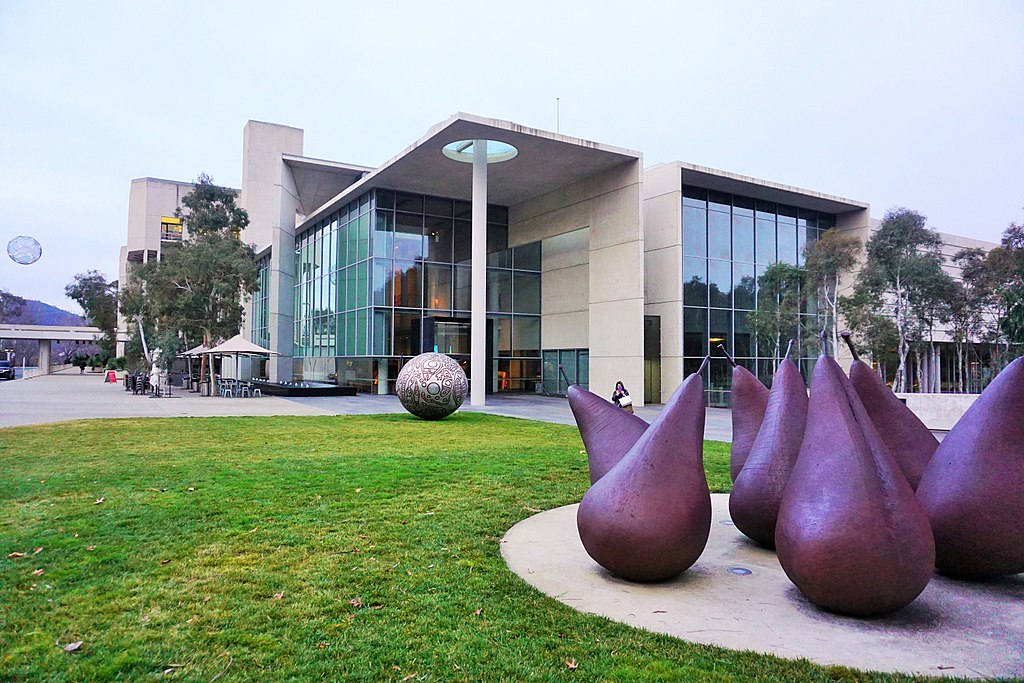 A Virtual Tour of the National Gallery of Australia

Highlights Tour of the National Gallery of Australia

“The Green Parasol” by E. Phillips Fox delightfully captures the color differences in light and shade. Fox was an Australian Impressionist painter who had a considerable influence as a teacher on Australian art during the late 1800s.

When compared with other leading Australian artists of the time, Fox shows more interest in exploring the “effects of dappled light.”

Rather than to the “sunny vistas,” one finds in the other Heidelberg School painters. He is described as an artist who “paid homage to Impressionism while retaining the tonal values of academic realism.”

“Landscape, Antibes (The Bay of Nice)” by John Peter Russell

“Bridge and Wattle at Warrandyte” by Penleigh Boyd

“Bridge and Wattle at Warrandyte” by Penleigh Boyd depicts bushland outside Melbourne, known for its wattle groves, and it is a quintessential Australian painting in landscape and palette.

Wattle became a national floral symbol when it became part of Australia’s coat of arms in 1912.

Penleigh Boyd is a landscape artist with expert handling of transient effects of light. He was influenced by E. Phillips Fox, who introduced him to Plein air techniques when they were neighbors in Paris in 1912–3.

His obituary at age 33 compared him to Arthur Streeton and praised him as one of the most promising painters of his generation.

“Child in The Bush” by Frederick McCubbin

“Child in The Bush” by Frederick McCubbin is a painting that revisited a central theme in McCubbin’s work which focused on narratives of vulnerable children stranded in the Australian Bush.

This painting depicts a girl wandering through the bush carrying a basket, collecting wildflowers, or berries. Her white dress stands out in her surroundings.

The landscape in this painting was close to McCubbin’s residence at Mount Macedon in Victoria, Australia, and the child in the image was the artist’s youngest daughter.

“Miss Minna Simpson” by Tom Roberts depicts the five-year-old niece of Tom Roberts’s future wife. The rosy-cheeked face looks directly at the viewer as she firmly holds her cat.

There is a confident contrast between the child’s relaxed face and the cat’s scowling face and paws reaching for the bowl of milk.

Roberts’ tonal palette with the dark background sets off the white apron, bonnet, and lace pays homage to the much-admired international artists such as Manet, Whistler, and Velásquez.

“From McMahon’s Point – fare one penny” by Arthur Streeton

“From McMahon’s Point – fare one penny” by Arthur Streeton was painting his 1890 visit to Sydney. While staying with his sister in Summer Hill, Streeton painted views from Coogee and the Harbour.

Streeton wrote to Tom Roberts about this painting at McMahon’s Point: “have a most delightful subject there looking towards Milson’s Pt with an expanse of water, tops of houses, and landing stage & station, in the foreground of the picture.”

“Hot Wind” by Charles Conder is a nineteenth-century symbolist painting depicting a femme fatale blowing smoke from burning brazier towards the distant town.

In the late 19th century, the symbolism was used in depictions of the Australian Colonial landscape. Charles Conder painted this example during the Victorian drought in 1889.

He is most known for the wilderness paintings, which are remarkable for their shadowy lighting and meticulous detail.

The scientific accuracy of his landscapes was influenced by the environmental theories of nature painting set by the Düsseldorf Academy, where he was trained.

This Folio of seven watercolors by Richard Browne with the description by Samuel Leigh depicts historical portraits of local Aboriginal people of the early 1800s.

Reverend Samuel Leigh composed the folio of letters in 1821 for his London-based brethren of the Wesleyan Mission Society, and Browne’s drawing illustrated the letters.

Richard Browne was an early Australian convict artist and illustrator who was transported from Ireland to the colony of New South Wales in 1811.

After his sentence was completed in 1817, he lived in Sydney, selling watercolor illustrations of natural history subjects and local Aborigines.

Richard Browne’s Indigenous peoples’ illustrations employed an exaggerated caricature style, which owed much to the silhouette portrait tradition and the stylistic demands of the period.

The Blue Mountains quickly became a tourist destination as word of its natural beauty spread with the help of paintings such as this one. Eugene von Guerard painted this painting nearly fourteen years after he visited this scene.

“Pastorale” was painted by Rupert Bunny, who was a magnificent colorist and erudite painter of classic themes. Bunny could masterfully handle large-scale compositions.

This painting incorporates aspects of symbolism and allegorical subjects. This painting is oddly named as it depicts the realms of land and sea, each with its inhabitants.

Mermaids and mermen in the sea and the fauns on the land. The nymph and young man are slender, pale, and discreetly clothed.

The young man is seated on the sea bank with legs dangling as he plays his pipe, while the nymph next to him, listens with her head on his shoulder.

The sea nymphs are enjoying the music on the shore, and the fauns cup their hands around their ears to hear better.

“Meules, milieu du jour” by Claude Monet is the original French title, which means ‘Stacks middle of the Day” and is part of a series of piles of harvested wheat.

The series consists of twenty-five canvas, which Monet began near the end of the summer of 1890, and though Monet also produced earlier paintings using this same stack subject.

The impressionist series is famous for how Monet repeated the same theme to show the different light and atmosphere at different times of day, across the seasons, and in many types of weather.

Monet’s Haystacks series is one of his earliest to rely on repetition of a subject to illustrate a subtle difference in color perception across variations of times of day, seasons, and weather.

Versailles exhibition at the National Gallery of Australia

The Amazing National Gallery of Australia

“A truly happy person is one who can enjoy the scenery on a detour.”
– Australian Proverb