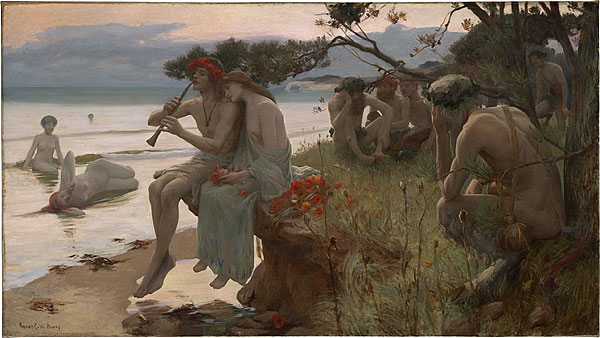 “Pastorale” was painted by Rupert Bunny, who was a magnificent colorist and erudite painter of classic themes. Bunny could masterfully handle large-scale compositions. This painting incorporates aspects of symbolism and allegorical subjects.

This painting is oddly named as it depicts the realms of land and sea, each with its inhabitants. Mermaids and mermen in the sea and the fauns on the land. The nymph and young man are slender, pale, and discreetly clothed.

The young man is seated on the sea bank with legs dangling as he plays his pipe, while the nymph next to him, listens with her head on his shoulder.

The sea nymphs are enjoying the music on the shore, and the fauns cup their hands around their ears to hear better.

Exploring the many details, we can see the red poppies, symbolizing dreams, and the white cliffs and a grotto in the distance suggesting the chalk cliffs of Brittany and Normandy.

This painting is a daydream that drifts between antiquity and a familiar modern landscape.

Rupert Bunny (1864 – 1947) was an Australian painter who achieved success and critical acclaim as an expatriate in fin-de-siècle Paris.

He gained an honorable mention at the Paris Salon of 1890 and a bronze medal at the Paris Exposition Universelle in 1900.

The French state acquired 13 of his works for the Musée du Luxembourg and regional collections.

Australian artist with a French connection