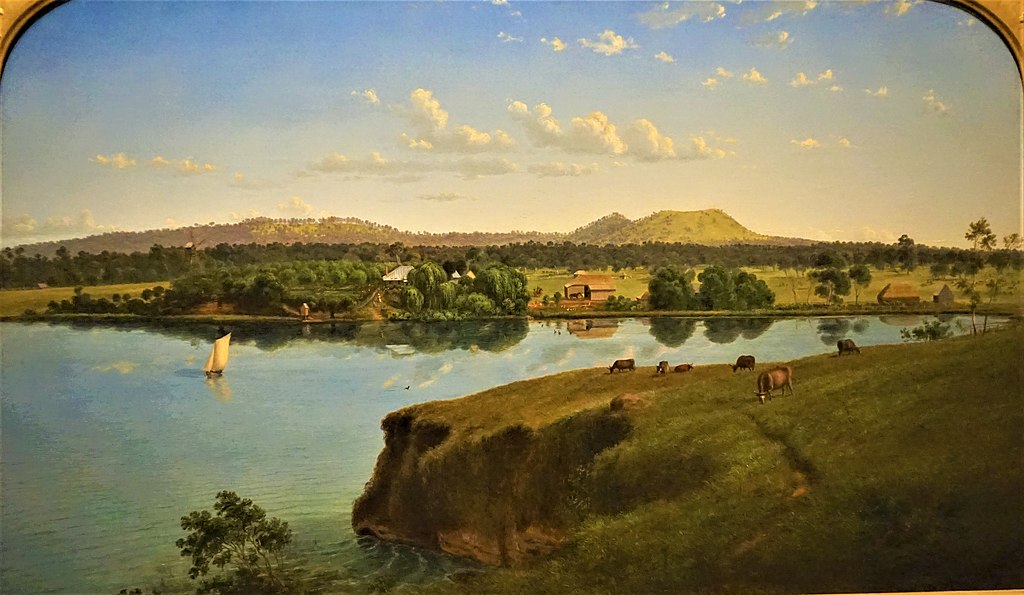 He is most known for the wilderness paintings, which are remarkable for their shadowy lighting and meticulous detail. The scientific accuracy of his landscapes was influenced by the environmental theories of nature painting set by the Düsseldorf Academy, where he was trained.

Johann Joseph Eugene von Guérard (1811 – 1901) was an Austrian-born artist, known for his finely detailed landscapes in the tradition of the Düsseldorf school of painting.

Von Guerard arrived in Victoria, Australia, in 1852 to try his luck on the Victorian goldfields.

As a gold-digger, he was unsuccessful, but he realized that there were opportunities for an artist in Australia, so he abandoned the diggings and was soon undertaking commissions recording the dwellings and properties of wealthy pastoralists.

By the early 1860s, von Guerard was the foremost landscape artist in the colonies, touring Southeast Australia and New Zealand in pursuit of the sublime and the picturesque.

He is most known for his wilderness paintings, which are remarkable for their lighting and exact detail.

In 1870 von Guerard was appointed the first Master of the School of Painting at the National Gallery of Victoria, where he was to influence the training of artists for the next 11 years.

Amongst his pupils were Frederick McCubbin and Tom Roberts. When Von Guerard retired, he departed for Europe in 1882.

Eleven years later, he lost his investments in the Australian bank crash, and he lived in poverty until his death in Chelsea, London, in 1901.

Lake Purrumbete is a volcanic lake in the Western District of Victoria, Australia. The lake is in a shallow, low-relief volcanic crater. The water is crystal clear most times of the year as the lake relies entirely on its catchment.

Lake Purrumbete originated about 20,000 years ago and is 45 m deep with a diameter of 2.5 km. It was caused by a volcanic eruption when flowing lava came in contact with groundwater.

Purrumbete from across the Lake

Eugene von Guérard ‘Purrumbete from across the lake’ 1858

” Some mistakes are too much fun only to make once.”
– Australian Proverb