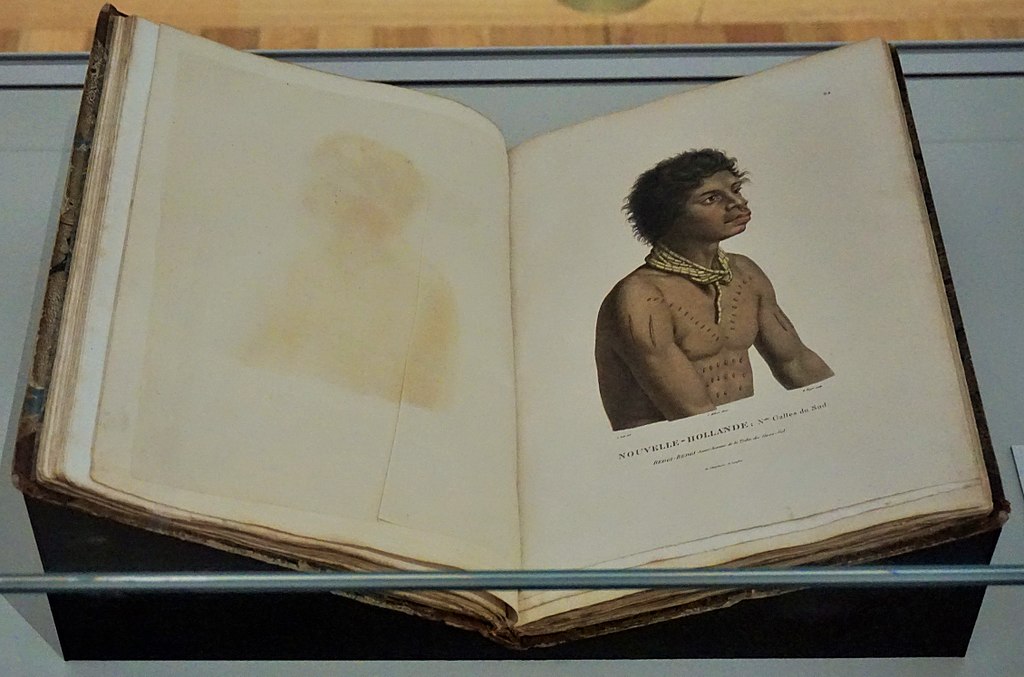 This color print of a half-figure portrait of Bedgi-Bedgi (c.1789-c.1837), a young Aboriginal man, drawn in 1802. Bedgi-Bedgi is shown with a pattern of scars on his body. He is also wearing a long necklace wrapped around his neck.

The body scars were formed deliberately. Both Tasmanian and mainland Indigenous peoples made cuts on their skin, usually with broken pieces of shell that were purposely kept open until flesh grew up between the two sides, then skinned over, leaving the raised scars.

The scars were made in patterns on the chest, back, arms, and shoulders.

Bedgi-Bedgi was a leader of the Burramattagal clan of the Dharug people. He joined several sealing and whaling voyages to the Bass Strait in the early 1800s.

He also acted as a tracker in an 1816 expedition aimed at suppressing aboriginal attacks against settlers in north-west Sydney. In 1816, Governor Macquarie granted him a king-plate declaring him’ chief of the Kissing Point Tribe,’

This engraving was published in France in 1824 is the second edition of ‘Voyage de decouvertes aux Terres Australes (Atlas)’ or ‘Voyage of discovery to the Austral Lands (Atlas).’

Petit concentrated on portraits and landscapes, from 1800 to 1804 French expedition to Australia led by Nicolas Baudin (1754-1803).

The journey set out with two ships in 1800, it was the most significant scientific team to leave Europe for the Pacific at that time, and it contributed significantly to knowledge of Australia’s Indigenous peoples, geography, and flora and fauna.