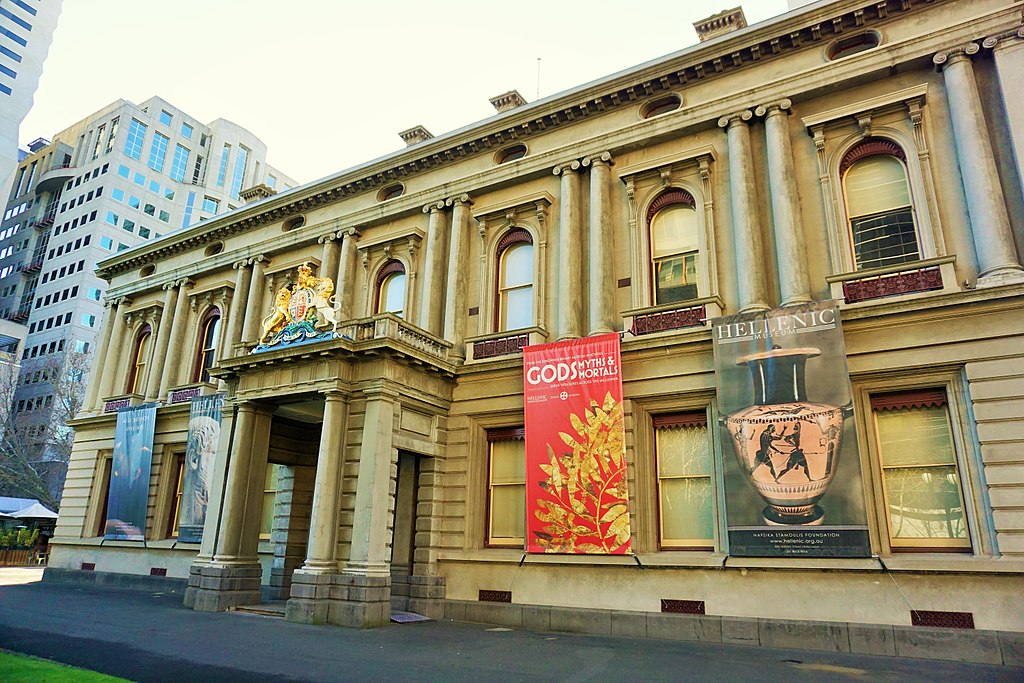 The Hellenic Museum was founded in 2007 and is based in Melbourne at the former Royal Mint building. The Hellenic Museum aims to promote “the celebration, understanding, and preservation of the artistic and cultural heritage of ancient and modern Greece.”

The museum’s collections include Cypriot Antiquities, Greek antiquities from southern Italy, and exhibitions focussing on Greek settlement in Australia. In 2013, the Hellenic Museum partnered with the Benaki Museum in Greece to house a permanent collection of antiquities for ten years.

Highlights of the Hellenic Museum, Melbourne

This “Cycladic Figurine” is a female of the “Folded-Arm” type. This marble sculpture is a fabulous creation of the Early Cycladic Culture and was probably associated with prehistoric Aegean religious beliefs. This figurine has red pigment traces that are preserved on the neck and head. The pigment is cinnabar, a bright red mineral, which was very precious at the time as it was imported from outside the Aegean.

This masterpiece is of the Spedos type, named after an Early Cycladic cemetery on the Greek Island of Naxos, which is the most common of Cycladic figurine types. It has the widest distribution within the Cyclades as well as elsewhere, and the greatest longevity. All known works of the Spedos variety are female figures. Spedos figurines are typically slender, elongated female forms with folded arms. They are characterized by U-shaped heads and a deeply incised cleft between the legs.

Cycladic Figures originated from the ancient Cycladic culture, which flourished in the islands of the Aegean Sea from c. 3300 to 1100 BCE. The best-known art of this period and culture are the marble figures, usually called Cycladic “idols” or “figurines.” The Cyclades is a group of Greek islands, southeast of the mainland in the Aegean Sea. It centers on the island of Delos, considered the birthplace of Apollo, and is home to some of Greece’s most important archaeological ruins.

The majority of these marble figures are highly stylized representations of the female human form, typically having a flat, geometric quality. It is depicted nude with arms folded across the stomach, and the right arm held below the left. Featuring long, lyre-shaped head, a semi-conical nose, sloping shoulders, narrow arms, and rounded back.

In more recent times, artists such as Picasso, Matisse, and Moore respected and collected Cycladic art as models of how one can create emotionally charged yet highly abstracted forms.

This “Cycladic Footed Cup” is a cup intended as a funerary offering during the Early Cycladic Period. This type of container was a typical Cycladic example and sits on a chalice-shaped foot. These types of Footed Cups may have complemented other Cycladic sculptures in funerary offerings and religious services.

Cycladic marble sculptures originated from the ancient Cycladic Culture, which flourished in the islands of the Aegean Sea from c. 3300 to 1100 BCE. The best-known art of this period and culture are the marble figures, usually called Cycladic “idols” or “figurines.”

The Cyclades is a group of Greek islands, southeast of the mainland in the Aegean Sea. It centers on the island of Delos, considered the birthplace of Apollo, and is home to some of Greece’s most important archaeological ruins.

This “Cycladic Pyxis” is cylindrical with a lid. It is a vessel decorated with an incised herring-bone pattern. Such pyxi were common in burials of the Early Cycladic I period and was used as a container for jewelry or other small offerings.

Cycladic art originated from the ancient Cycladic culture, which flourished in the islands of the Aegean Sea from c. 3300 to 1100 BCE. The best-known art of this period and culture are the marble figures, usually called Cycladic “idols” or “figurines.” The Cyclades is a group of Greek islands, southeast of the mainland in the Aegean Sea. It centers on the island of Delos, considered the birthplace of Apollo and home to some of Greece’s most important archaeological ruins.

Other forms of pottery have been found in Early Cycladic sites. All pottery of early Cycladic civilization was made by hand and was typically black or reddish. The most common shapes are cylindrical boxes, known as pyxides and collared jars. The local clay proved difficult for artists to work, and the construction was crude, with thick walls and imperfections. Sometimes the pottery features naturalistic designs reminiscent of the sea-based culture of the Aegean islands.

This “Head of a Cypriot Herakles” is the head of a statue of Herakles, also known as Hercules, wearing a lion’s head with a wide-open muzzle as head-gear.  It belongs to a series of Cypriot sculptures in which the Herakles is represented holding a club in his right hand.

Heracles (Greek: Ἡρακλῆς), was a divine hero in Greek mythology, the son of Zeus. He was the great hero of the Greeks, a paragon of masculinity and the ancestor of many royal clans who claimed to be Heracleidae, meaning descendants of Heracles. In the late sixth century B.C., the local Cypriot god was assimilated with the powerful Greek hero, Herakles. In Cyprus, he was represented bearded or beardless, wearing a lion’s skin and a short tunic and holding a miniature lion in his hand. Herakles was the divinity most often depicted in Cypriot sanctuaries.

In Rome and the modern world, Heracles is better known as Hercules, with whom the Roman emperors, often identified themselves. The Romans adopted the Greek version of his life and works essentially unchanged, but added their anecdotal detail and his cult were adapted to Rome.

The legends of Hercules/Heracles have followed the spread of Greek and Roman ideas and culture in many diverse corners of the world. Examples include:

According to Greek myths, Heracles was driven mad by Hera, and he slew his children. To expiate the crime, Heracles was required to carry out ten labors. If he succeeded, he would be purified of his sin, and, according to myth, he would become a god, and be granted immortality.

Despite the difficulty, Heracles accomplished these tasks, but two of the labors were questioned, so two more tasks were set. In the end, the hero successfully performed each added task, bringing the total number of labors up to the number twelve. The twelve labors were: 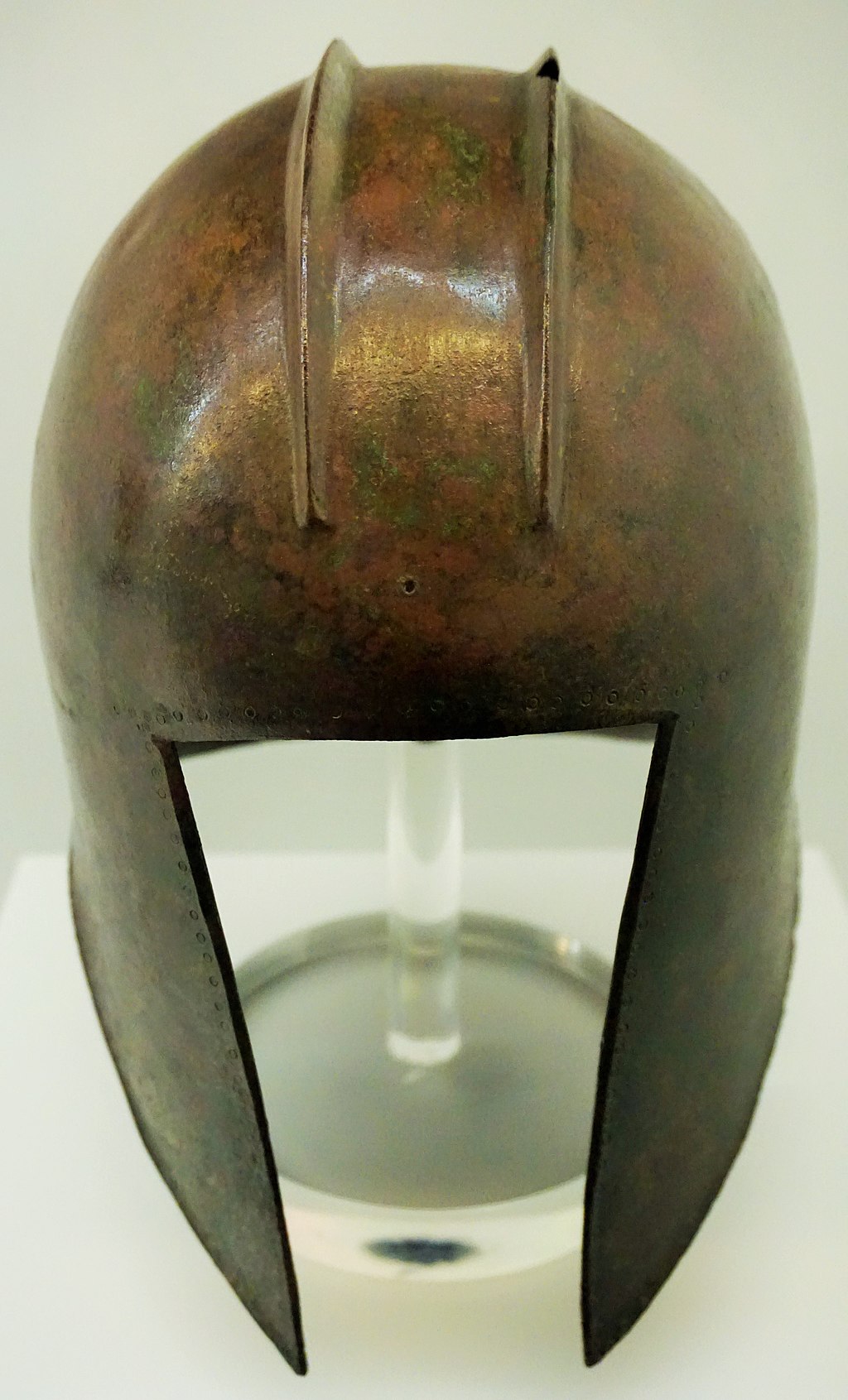 This Greek “Illyrian type” Helmet is a military bronze helmet, with ribs on the crown that were used to attach the crest. Its earliest styles were developed in ancient Greece, in the Peloponnese, during the 8th and 7th centuries BC (700–640 BC). Representations on Corinthian vases show that the “Illyrian” type helmet was developed before 600 BC.

The helmet was misleadingly named as an “Illyrian” type due to the many early finds coming from Illyria. The Illyrians were a group of ethnic tribes in antiquity, who inhabited part of the western Balkans and the south-eastern coasts of the Italian peninsula. Today this area corresponds to Croatia, Bosnia and Herzegovina, Slovenia, Montenegro, part of Serbia, and most of Albania.

According to archaeological evidence, the earliest “Illyrian” type helmets were developed in a workshop in the northwestern Peloponnese, possibly Olympia. The Illyrian type helmet was used by the ancient Greeks, Etruscans, Scythians and became popular with the Illyrians.

This “Goddess with Diadem” is a Roman copy of the head of an Athenian cult statue of a peplos-clad goddess. We can only speculate on the original complete form of this statute and which goddess the figure represented. The Greeks created images of their deities for many purposes. A temple would house the statue of a god or goddess and might be decorated with relief scenes depicting myths.

The most popular greek Goddesses included:

In Ancient Greece, mythology was at the heart of everyday life. Greeks regarded mythology as a part of their history and legacy. They used myth to explain natural phenomena, cultural variations, enmities, and friendships. Greek mythology was embodied in Greek arts, such as vase-paintings, votive gifts, and statues. Divine images were also standard on coins and drinking cups.

This “Myrtle Wreath” is a gold wreath imitating natural myrtle and was found in the royal tombs of Macedonia, Asia Minor, and southern Italy. Wreaths of Myrtle were associated with the Goddesses Aphrodite, Demeter and Persephone. The crowning of the dead with a wreath signified that they were worthy of being rewarded in eternal life after death. Most of the Myrtle Wreaths that survive today from antiquity were found in graves.

Greeks wore wreaths for special events and received them as athletic and artistic prizes and honors. The myrtle leaves and blossoms on the myrtle wreath were cut from thin sheets of thin gold, stamped and incised details, and then wired onto the stems.