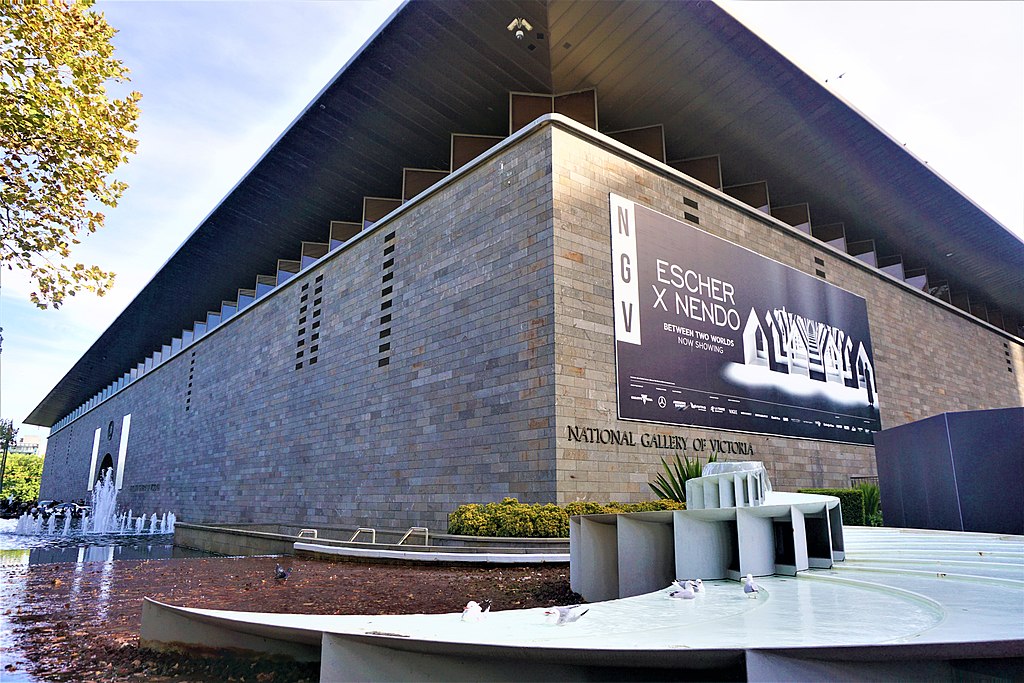 Highlights Tour of the National Gallery of Victoria

These Australian Aboriginal shields are made from wood, cane, feathers, and earth pigments. Most of these shields come from the south-eastern regions of Australia.

For Aboriginal societies, these shields were unique objects of power and prestige. Unfortunately, much of their ownership, history, and iconography have been lost.

The Aboriginal people existed in Australia and surrounding islands before European colonization going back in time to between 61,000 and 125,000 years ago.

The trauma of loss that followed the establishment of a British colony in Australia had an enormously adverse effect on the indigenous Aboriginal People.

The widespread loss of language, culture, and tradition changed aboriginal life and their art culture.

“Endormies” by Rupert Bunny depicts two female figures relaxing and dreaming at the water’s edge. Endormie means sleepy is French and is descriptive of this scene.

Bunny modeled the sleeping figure on his wife Jeanne Morel, featured in many paintings during this period. Jeanne is a French variation of Jean, and the meaning of the name is “God is gracious.”

Her graceful and sensuous features graced many of his paintings.

“Shearing the Rams” by Tom Roberts was painted in 1890 and depicted the sheep’s shearing in a timber shearing shed.

Roberts wanted to express the difficulty and fast working shearing process. The physical masculinity is portrayed with the frequent arched bending of the shearers spread down into the shed’s depths.

At the same time, this was also a scene of excitement, and he has bathed the composition in the warm Australian sunlight.

The two young boys capture the joy of the occasion. One boy is on the left in bare feet, and the second is in the center of the composition, looking directly at the viewer with a white-toothed smile.

“The Purple Noon’s Transparent Might” by Arthur Streeton depicts the blue and gold of Australia’s sun-drenched landscape.

He was inspired by the expansive view looking towards the Blue Mountains.

“The Pioneer” by Frederick McCubbin

“The Pioneer” by Frederick McCubbin was painted in 1904 as a triptych depicting the story of a settler family making a living in the Australian bush.

The left panel shows the settler and his wife on their “selection.” “Selection” referred to the free selection program of crown land in some Australian colonies in the 1860s.

In the middle of the bush is the wagon with the man who is starting a campfire. In the foreground, the woman is deep in thought.

Sketches and paintings of Australia’s Indigenous owners, Australia’s flora and fauna started with Captain Cook’s entourage members who were on a scientific quest.

With the arrival of the First Fleet of the settlement, the number of images of Australia’s unique environment increased, as did art depicting the growing settlements across the colony.

The “Head Covering of Padihorpasheraset” is an elaborately decorated ancient Egyptian mummy case head covering. The covering is also called a cartonnage.

The presentation of the head of the deceased was especially crucial in ensuring survival in the next life. Coffins with the funerary masks had returned to popularity during the Ptolemaic and Roman Periods.

During these periods, only partial sections of the wrapped body were covered with decorated cartonnage.

“The Crossing of the Red Sea” by Nicolas Poussin

Poussin’s composition of the classic Biblical story shows Moses with his hand raised, as through him, God completes the parting of the Red Sea.

The Israelites are shown in the aftermath of this event, awestruck and celebrating because they have escaped Pharoah’s army.

The Israelites recover from the waters, the armor and clothing of the drowned Egyptian military after the Israelites had crossed in safety.

“An Interesting Story” by James Tissot

“An Interesting Story” by James Tissot depicts two fashionably dressed young being bored by a sailor who is engrossed in his own storytelling.

Exhibited at the Royal Academy in 1872, this was one of the first paintings Tissot showed in London after he left France at the fall of the Paris Commune in 1871.

The setting of this painting on the Thames would have made it appealing to contemporary audiences when many artists were exploring the historic, romantic, and nostalgic qualities of the Thames.

“Ulysses and the Sirens” by John William Waterhouse

“Ulysses and the Sirens” by John William Waterhouse dramatically illustrates an episode from the Greek hero Odysseus’s journeys, who is better known as Ulysses, the Latin variant.

This painting depicts the incident in which the infamous Sirens lured unwary sailors towards perilous rocks and their doom by singing their enchanting songs.

Ulysses was curious to hear the Sirens song, and so, on Circe’s advice, he had all of his sailors plug their ears with beeswax and then allowed himself to be tied to the mast.

He ordered his men to leave him tied tightly to the mast, no matter how much he would beg. When Ulysses heard their beautiful song, he ordered the sailors to untie him, but they bound him tighter. When they had passed out of earshot, Odysseus was released.

“Fair Rosamund” by Arthur Hughes depicts Henry II of England’s beautiful mistress and true love. The King had created a secret garden for Rosamund, accessible only via a maze.

Hughes has painted the moment when Queen Eleanor, seen in the background, discovers the garden entrance.

Rosamund Clifford (1150 – 1176), often called “The Fair Rosamund,” was famed for her beauty and became famous in English folklore.

Rosamund grew up at Castle Clifford before going to Godstow Nunnery, near Oxford, to be educated by the nuns. Soon after her education was completed, King Henry adopted her as his mistress.

To conceal his illicit relationship from his queen, Eleanor of Aquitaine, he met Rosamund within the innermost recesses of a  maze which he had created as a secret garden at Woodstock, a Royal estate in Oxfordshire,

Queen Eleanor heard the rumors and contrived to penetrate the labyrinth and confronted her rival. She forced Rosamund to choose between the dagger or the cup of poison. Rosamund chose the poisoned cup and died.

The National Gallery of Victoria is celebrating 150 years.

“Those who lose dreaming are lost.”
– Australian Aboriginal Proverb