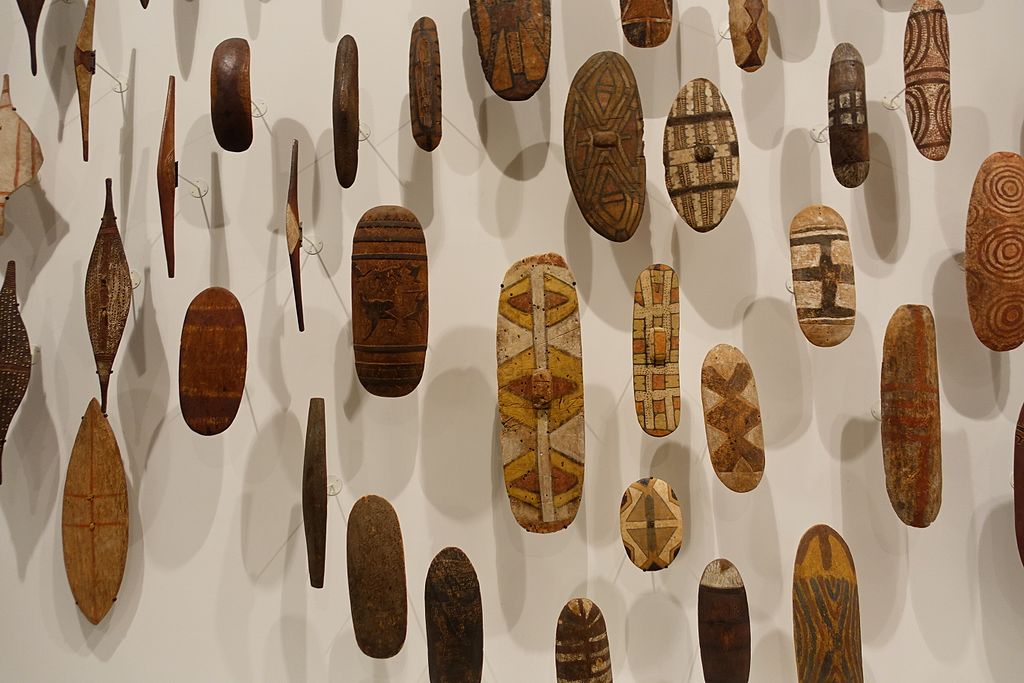 These Australian Aboriginal shields are made from wood, cane, feathers, and earth pigments. Most of these shields come from the south-eastern regions of Australia.

For Aboriginal societies, these shields were unique objects of power and prestige. Unfortunately, much of their ownership, history, and iconography have been lost.

The Aboriginal people existed in Australia and surrounding islands before European colonization going back in time to between 61,000 and 125,000 years ago. T

he trauma of loss that followed the establishment of a British colony in Australia had an enormously adverse effect on the indigenous Aboriginal People.

The widespread loss of language, culture, and tradition changed aboriginal life and their art culture.

Some of these shields would have been used during the conflict with colonial settlers and tribal disputes.

They would have been used to protect warriors against spears in staged battles or clubs in close fighting during contests for water, territory, and women.

These shields would have also been used during a culturally significant occasion, such as in corroborees. Corroborees are Australian Aboriginal dance ceremonies, which may take the form of a sacred ritual or an informal gathering.

These shields were often used in dances at ceremonies or traded as valuable cultural objects.

The shield collection also includes the narrow, wedge, or oval shields (pictured on the left below), which were used to ward off a weapon of attack with a counter move. The designs on the shields are all different, and no two are similar.

These shields were viewed as having their innate power. A shield that had “won many fights” was prized as an object of trade or honor.

During the Aboriginal’s first encounter with Europeans, they would have used this leaf-like shaped shield below as their armor of battle.

The Eora people of Botany Bay in New South Wales were the first Aboriginal nation to encounter Captain James Cook on his voyage of British discovery to Australia in 1770.

This Australian Aboriginal bark shield from Botany Bay, New South Wales, Australia, has been identified as having been collected in 1770 on Captain Cook’s First Voyage in HMS Endeavour (1768-71). This shield is at the British Museum.

The hole in the center may have come from a musket bullet, fired by the British sailors against the aborigines, who then dropped this shield. History does not record what happened to that aborigine faced with this first alien contact.

“Traveler, there are no paths. Paths are made by walking.”

“Those who lose dreaming are lost.”

“We are all visitors to this time, this place. We are just passing through. Our purpose here is to see, to learn, to grow, to love, and then we return home.”

“The more you know, the less you need.”

“Keep your eyes on the sun, and you will not see the shadows.”

“We are all visitors to this time, this place. We are just passing through.
Our purpose here is to see, to learn, to grow, to love, and then we return home.”
– Australian Aboriginal saying