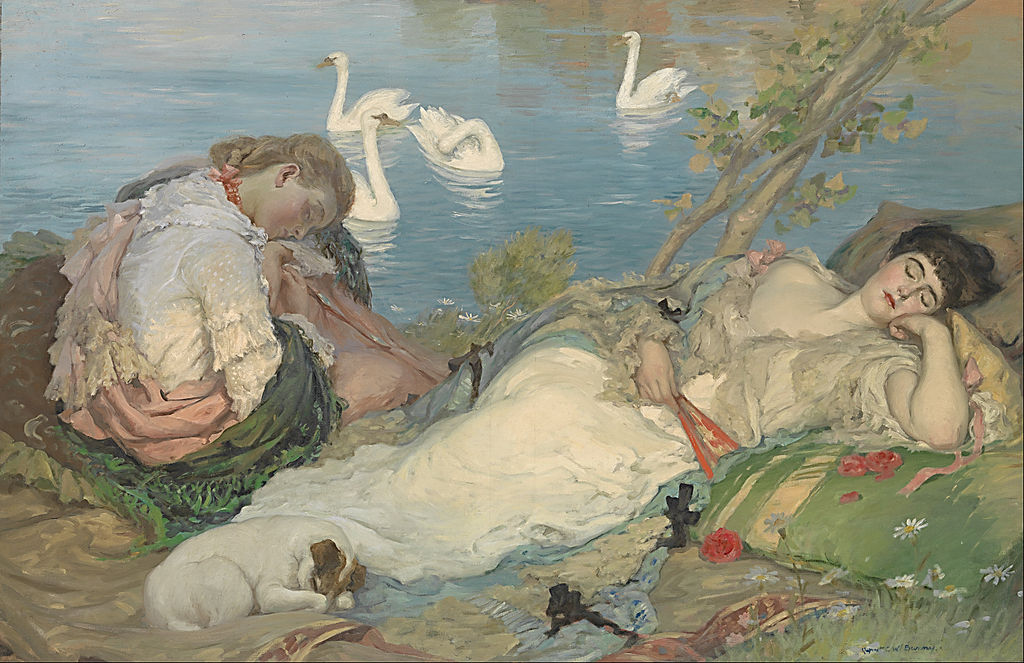 “Endormies” by Rupert Bunny depicts two female figures relaxing and dreaming at the water’s edge. Endormie means sleepy is French and is descriptive of this scene. Bunny modeled the sleeping figure on his wife Jeanne Morel, who featured in many paintings during this period.

Jeanne is a French variation of Jean, and the meaning of the name is “God is gracious.” Her graceful and sensuous features graced many of his paintings.

In this painting, Bunny has included a rose, a traditional symbol of love, as well as the white swans, which are symbolic of grace and beauty. These are recurring themes in Bunny’s compositions and was inspired by French art motifs from before the Great War. Many artists also used the motif of a small dog to symbolize marital fidelity, which can be seen in this painting, sleeping at the feet of his mistress.

Rupert Bunny (1864 – 1947) was an Australian painter. He was a magnificent colorist and erudite painter of classic themes. His paintings were inspired by European masters and brought him success more significant than any other Australian artist working abroad.

Bunny initially studied art in London, then he went to Paris to study and was a frequent visitor to the Étaples Art colony. The Etaples Art Colony consisted of artists working in the Étaples area of northern France at the turn of the 20th century. Although broadly international, it was made up mainly of English-speakers from North America, Australasia, and the British Isles.

The French state acquired 13 of his works for the Musée du Luxembourg and regional collections. Rupert Bunny’s success during the decades he spent in Paris saw his work exhibited throughout Europe and collected by many museums. He also led a cosmopolitan life with acquaintances amongst the leading celebrates of the time, such as Nellie Melba, Auguste Rodin, and Sarah Bernhardt.

In 1902, he married Jeanne Heloise Morel, a former art student, and model, who frequently appeared in his paintings. After traveling back and forth between Australia and France on numerous occasions, after his wife died in 1933, he returned permanently to Australia.

The Etaples art colony consisted of artists working in the Étaples area of northern France at the turn of the 20th century. The colony had its heyday between 1880–1914, after which World War I disrupted it. Although broadly international, it was made up mainly of English-speakers from North America, Australasia, and the British Isles. While some artists settled in the area, other visitors stayed only a season or an even shorter time. Many journeyed from art colony to art colony along the coasts of Normandy and Brittany.

Twenty-two Australians and three New Zealanders, have been noted as living at or visiting the Etaples Art Colony. They were also connected with several of the French artists’ colonies and the plein air style associated with them.

Art is either revolution or plagiarism. – Paul Gauguin

“I am seeking. I am striving. I am in it with all my heart.”
– Vincent van Gogh

“If I could say it in words, there would be no reason to paint.”
– Edward Hopper

“Every child is an artist. The problem is how to remain an artist once we grow up.”
– Pablo Picasso

“Art aims to represent not the outward appearance of things, but their inward significance.”
– Aristotle

“The most beautiful experience we can have is the mysterious.
It is the fundamental emotion that stands at the cradle of true art and true science.”
– Albert Einstein

“You use a glass mirror to see your face; you use works of art to see your soul.”
– George Bernard Shaw

“You don’t take a photograph; you make it.”
– Ansel Adams

“Art washes away from the soul the dust of everyday life.”
– Pablo Picasso

“Paradoxically though it may seem, it is none the less true that life imitates art far more than art imitates life.”
-Oscar Wilde

“Color provokes a psychic vibration. Color hides a power still unknown but real, which acts on every part of the human body.”
– Wassily Kandinsky

“You must have chaos within you to give birth to a dancing star.”
– Friedrich Nietzsche

“To be an artist is to believe in life.”
– Henry Moore

“I never paint dreams or nightmares. I paint my own reality.”
– Frida Kahlo

“Painting is poetry that is seen rather than felt, and poetry is painting that is felt rather than seen.”
– Leonardo da Vinci

“Vision is the art of seeing things invisible.”
– Jonathan Swift

“I am happy to be alive as long as I can paint.”
– Frida Kahlo