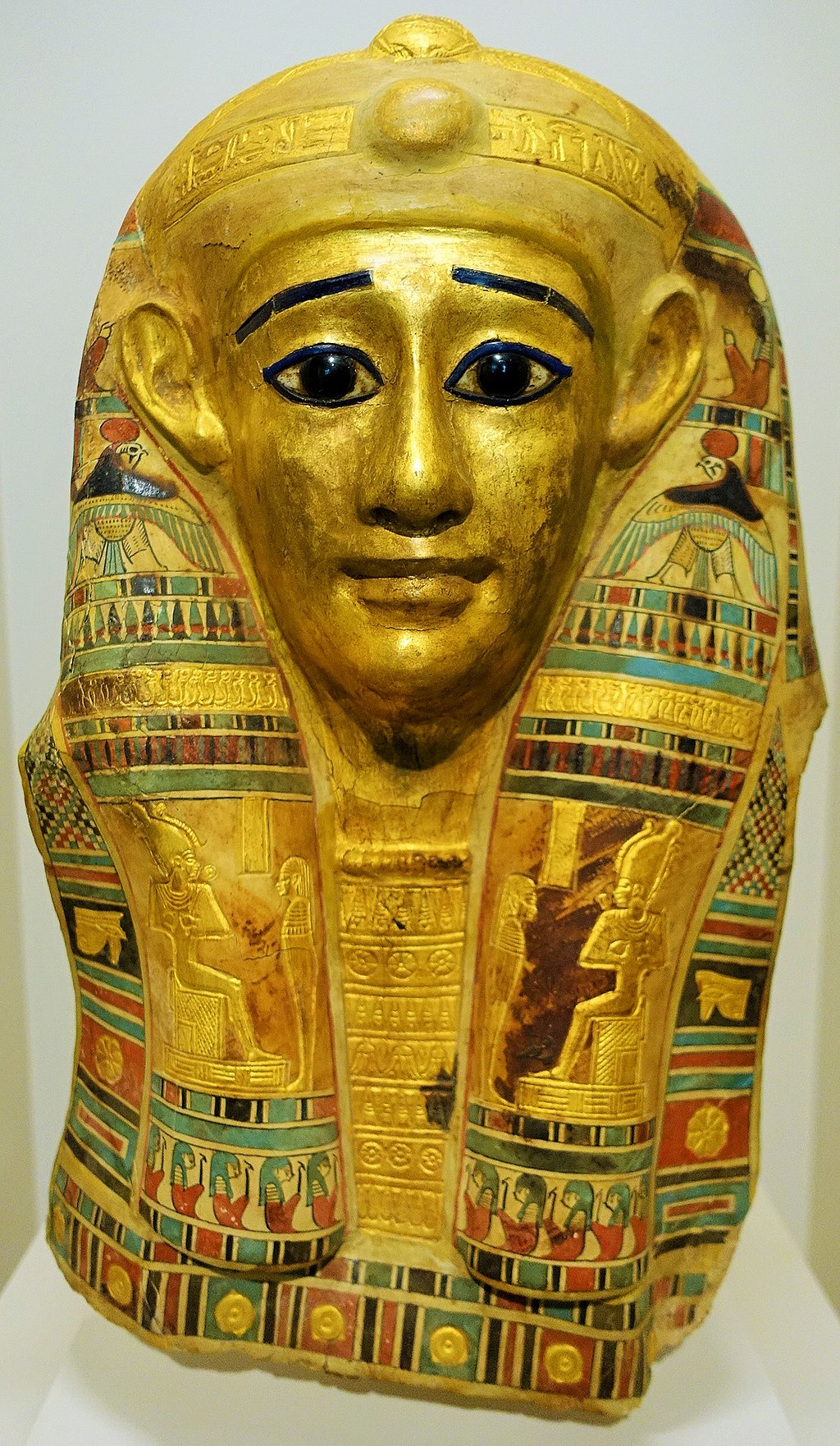 The “Head Covering of Padihorpasheraset” is an elaborately decorated ancient Egyptian mummy case head covering. The covering is also called a cartonnage. The presentation of the head of the deceased was especially crucial in ensuring survival in the next life. Coffins with the funerary masks had returned to popularity during the Ptolemaic and Roman Periods. During these periods, it was only partial sections of the wrapped body that were covered with decorated cartonnage.

The owner’s name was ‘Padihorpasheraset,’ and we know this because it is inscribed in hieroglyphs across the brow. The gilded head-covering shows the Padihorpasheraset wearing a lappet-wig, behind the ears and a collar, and between the lappets on the chest. The lappets on the front of the covering are decorated with panels depicting Padihorpasheraset as a mummy, standing in front of the god Osiris who is shown seated on a throne. The head covering is painted in various colors, including blue, red, black, pale yellow, pink, and khaki green.

The facial features are molded, and the eyes and eyebrows are inlaid with glass, dark blue for the eyebrows and outline of the eyes, opaque white glass for the whites of the eyes, and clear glass painted black on the back for the pupils.

Cartonnage is a type of material used in Ancient Egyptian funerary masks from about 2000 BC  to the Roman era. It was made of layers of linen or papyrus covered with plaster. The technique is similar to paper-mâché, and the process involved scraps of linen or papyrus being stuck or glued together with plaster or resin to make mummy cases and masks. It could be molded to the shape of the body, forming a type of shell. After the material dried, it could be painted and gilded. The shell could also be decorated with geometric shapes, deities, and inscriptions.

During the Ptolemaic era (305 BC – 30BC), the single-shell method was altered to include four to six pieces of cartonnage. There would generally be a mask, pectoral, apron, and foot casing. In certain instances, there were two more pieces used to cover the ribcage and stomach.

Sometimes the preparation of cartonnage preserved the sections of papyrus with text on them. Therefore, it is a prominent source of well-preserved manuscript sections. Conservators have been able to protect the cartonnage and still publishing the papyrus texts derived from them.

The Ptolemaic Kingdom was a Hellenistic kingdom based in ancient Egypt. It was ruled by the Ptolemaic dynasty, which started with Ptolemy I Soter’s accession after the death of Alexander the Great in 323 BC and which ended with the death of Cleopatra and the Roman conquest in 30 BC.

Ptolemy I Soter, was a general and friends of Alexander the Great formerly from Macedon in northern Greece. After Alexander’s death, Ptolemy I Soter declared himself Pharaoh of Egypt. He created a powerful Macedonian Greek dynasty that ruled an area stretching from southern Syria to Cyrene and south to Nubia.

Alexandria, founded by Alexander the Great, became the capital city and a major center of Greek culture and trade. To gain the acceptance of the native Egyptian populace, the Ptolemies named themselves as pharaohs. The later Ptolemies took on Egyptian traditions and had themselves portrayed on public monuments in Egyptian style and dress, and participated in Egyptian religious life. The Hellenistic culture continued to thrive in Egypt throughout the Roman and Byzantine periods until the Muslim conquest.

The Roman province of Egypt was established in 30 BC after Octavian, the future Roman emperor Augustus, defeated his rival Mark Antony, deposed Pharaoh Cleopatra, and annexed the Ptolemaic Kingdom to the Roman Empire. The province encompassed most of modern-day Egypt except for the Sinai Peninsula. Called Aegyptus by the Romans, the region came to serve as a major producer of grain for the empire and had a highly developed urban economy.

Roman Egypt was by far the wealthiest Eastern Roman province and by far the most prosperous Roman province outside of Italia. Alexandria, it’s capital, possessed the most important port, and the second-largest city of the Roman Empire.