“The Pioneer” by Frederick McCubbin

“The Pioneer” by Frederick McCubbin was painted in 1904 as a triptych depicting the story of a settler family making a living in the Australian bush. The left panel shows the settler and his wife on their “selection.”

“Selection” referred to the free selection program of crown land in some Australian colonies in the 1860s. In the middle of the bush is the wagon with the man who is starting a campfire. In the foreground, the woman is deep in thought.

In the center panel, the passage of time is indicated by the young child in the woman’s arms. The family home can be seen in the center through a clearing in the trees.

The clearing shows where the trees have been removed to create pasture and tillable land. The right panel shows that time has moved on with a city visible in the background.

A young man is kneeling and clearing a grave. Is the young man kneeling, the young boy from the center panel?

This triptych is a masterpiece of Australian art. It was produced three years after Australian Federation and from one perspective was a display of nationalistic pride in the Australian pioneer legacy and the future prosperity of the city in the background.

The narrative, however, is ambiguous if the focus is on the woman’s sad expression and body language. This theme can also be seen in another Frederick McCubbin painting called “On the Wallaby Track,” as seen below. 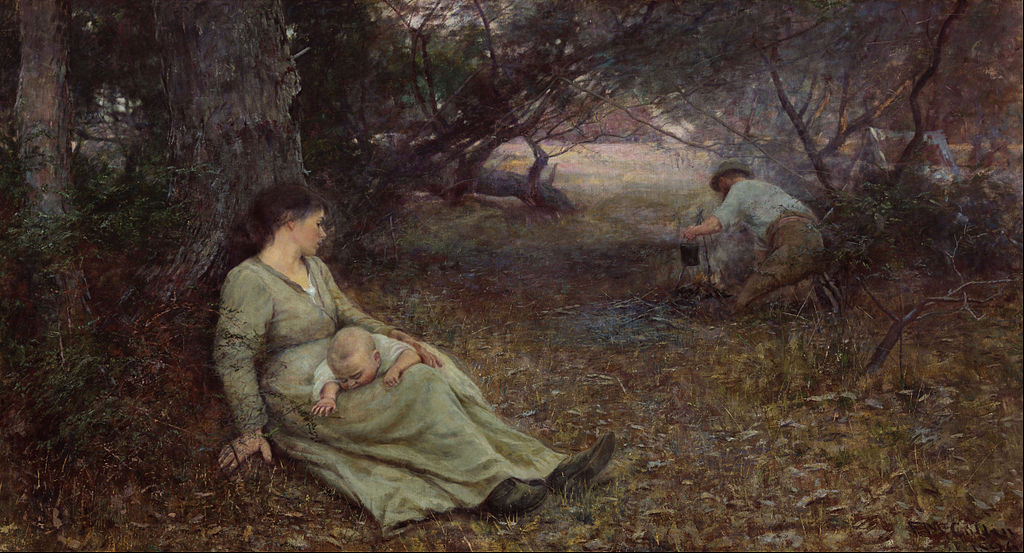 “On the Wallaby Track” by Frederick McCubbin

It is interesting to note that initially, there were no buyers for “The Pioneer” until a friend suggested that the town in the last panel be made to look like the city of Melbourne.

McCubbin painted in the view of Melbourne, and the painting soon sold.

Frederick McCubbin (1855 – 1917) was an Australian artist and prominent member of the Heidelberg School art movement, also known as Australian Impressionism.

McCubbin was born in Melbourne, Australia, and worked for a time as solicitor’s clerk, a coach painter, and in his family’s bakery business.

Meanwhile, he also studied art at the National Gallery of Victoria’s School of Design, where he met Tom Roberts and studied under Eugene von Guerard.

He also studied at the Victorian Academy of the Arts and sold his first painting in 1880 at the age of twenty-five.

McCubbin’s work began to attract attention, and he won several prizes from the National Gallery. By the mid-1880s, he concentrated more on painting the Australian bush, the artworks for which he became notable.

In 1888, he became the instructor and master of the School of Design at the National Gallery. There he taught many students who themselves became prominent Australian artists, including Charles Conder and Arthur Streeton.

In 1901 McCubbin and his family moved to Mount Macedon. It was at the Macedon region with its surrounding bush that inspired him to experiment with the light and its effects on color in nature.

It was in this setting that he painted The Pioneer, among many other bush works. McCubbin continued to paint, though, by the beginning of World War I, his health began to fail, and he died in 1917 from a heart attack.

During the 1870s and 1880s, European artists immigrated to Australia and brought their experience of Plein–air movement to Australia.

Through their work and teaching, they made significant contributions to the development of Impressionism in Australia. Drawing on naturalist and impressionist ideas, they sought to capture Australian life, the bush, and the sunlight of the country.

In French Impressionism, colors were painted with more explosive energy and with more pure primary and secondary tones for complementary contrasts.

Australian Impressionists tended to show Australian tones of dry soil, eucalypt woods, and sand, with the dabbling of warm and cold colors.

Australian Impressionism is notable for its compositions of Australia’s cultural heritage.

During the period after Australia’s Federation in 1901, Australian nationalism and Australian Impressionists provided works that have become icons of a passing Australia.

“Nature is a haunted house–but Art–is a house that tries to be haunted.”
– Emily Dickinson