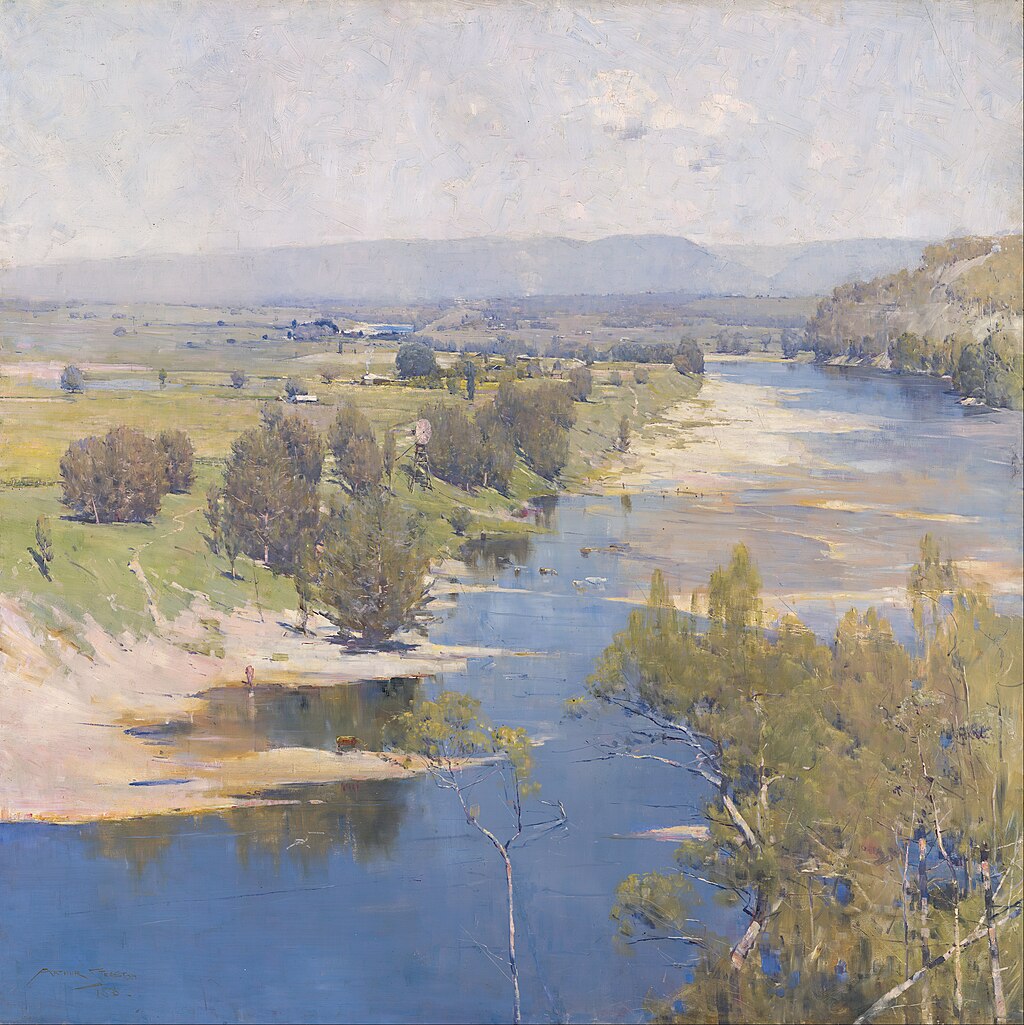 “The Purple Noon’s Transparent Might” by Arthur Streeton depicts the blue and gold of Australia’s sun-drenched landscape. In early 1896 Streeton traveled to the upper reaches of the Hawkesbury River in New South Wales, Australia. He was inspired by the expansive view looking towards the Blue Mountains.

On a ledge above the oaks and eucalypts, Streeton painted this work in two days, during a shade temperature of 108 degrees Fahrenheit. Later, Streeton recalled he worked on the canvas in ‘a kind of artistic intoxication with Shelley’s thoughts.

“My work may perish, but I must work so as to go on…

When the painting was exhibited, it was immediately recognized as a masterpiece, and it received many tributes.

The sun is warm, the sky is clear,
The waves are dancing fast and bright,
Blue isles and snowy mountains wear
The purple noon’s transparent might,
The breath of the moist earth is light,
Around its unexpanded buds;
Like many a voice of one delight,
The winds, the birds, the ocean floods,
The City’s voice itself is soft like Solitude’s.

‘Stanzas Written in Dejection, Near Naples’ is considered one of Shelley’s most beautiful poems. Mrs. Shelley published it as “Posthumous Poems” in 1824, dated as ‘December 1818’.

It is one of his representative Romantic poems, with its depiction of personal feelings against the natural world’s backdrop at the sea’s shores at the Bay of Naples.

Arthur Streeton and his fellow Australian artists who painted “en Plein air” in Heidelberg on Melbourne’s outskirts were labeled members of the “Heidelberg School.”

The term has since evolved to cover painters who worked together at “artists’ camps” around Melbourne and Sydney in the 1880s and 1890s.

Along with Streeton, Withers, Tom Roberts, Charles Conder, and Frederick McCubbin are considered essential figures of the movement. The movement has recently been described as “Australian Impressionism.”

Drawing on impressionist ideas, the “Australian Impressionists” sought to capture Australian life. They portrayed the Australian bush and the harsh sunlight that typifies the country.

Arthur Streeton: A collection of paintings

“The sun is warm, the sky is clear,
Blue isles and snowy mountains wear
The purple noon’s transparent might.”
– Percy Bysshe Shelley