The Old Melbourne Gaol is a museum that consists of the main bluestone building and courtyard, located next to the former City Police Watch House and City Courts buildings. It was first constructed starting in 1839, and during its operation as a prison, it executed 133 people, including bushranger Ned Kelly.

The museum displays information and memorabilia of the prisoners and staff, including death masks of the executed criminals.

A Tour of Old Melbourne Jail

This death mask is of Edward ‘Ned’ Kelly (1855–1880), who was a bushranger of Irish descent and is an Australian folk hero. In the 1800’s it was common practice for authorities to allow the making of a plaster ‘death mask’ of an executed criminal, to conduct a phrenological analysis. The masks were often put on public display, and Ned Kelly’s death mask was an object of significant public interest in the late 1800s.

Kelly was born in the colony of Victoria as the third of eight children to an Irish convict and an Australian mother with Irish parentage. His father died after serving a six-month prison sentence, leaving Kelly, aged 12, as the eldest male of the household. The Kelly’s were poor and saw themselves as oppressed and as victims of police persecution. Kelly was convicted of stealing horses and imprisoned for three years in 1870. After his release, he was indicted for the attempted murder of a police officer at his family’s home. After fleeing into the bush, he and his gang killed three police officers, and they were all proclaimed outlaws. 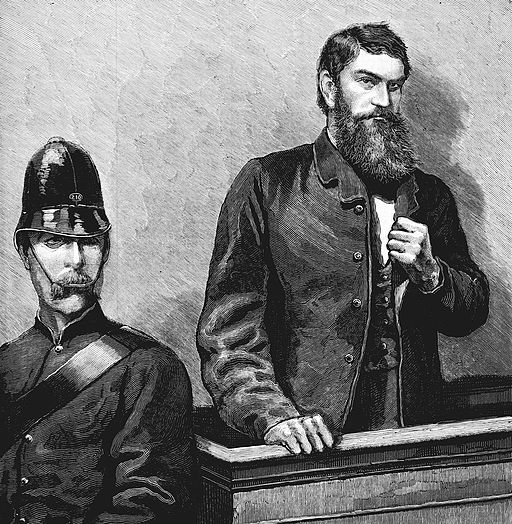 “Kelly in the dock” – A sketch from life, printed in The Illustrated Australian News.

Kelly and his gang gained publicity after committing armed bank robberies in Euroa and Jerilderie, and after murdering a friend turned police informer. In a manifesto letter, Kelly denouncing the police, the government, and the British Empire and set down his account of the events leading up to him becoming an outlaw. Demanding justice for his family and the rural poor, he threatened those who defied him. He ended with the words:

“I am a widow’s son, outlawed, and my orders must be obeyed.”

Pursued by police, Kelly and his gang, dressed in self-made suits of metal armor and their bushranger careers, ended in a final deadly confrontation with the police at Glenrowan, Victoria, in 1880. All were killed except Kelly, who was wounded and captured. Despite thousands of supporters attending rallies and signing a petition for his reprieve, Kelly was convicted and sentenced to death by hanging. Kelly was executed by hanging at the Old Melbourne Gaol, and his last words are famously reported to have been:

Ned Kelly remains a cultural icon, inspiring countless works in the arts, and is the subject of more biographies than any other Australian. 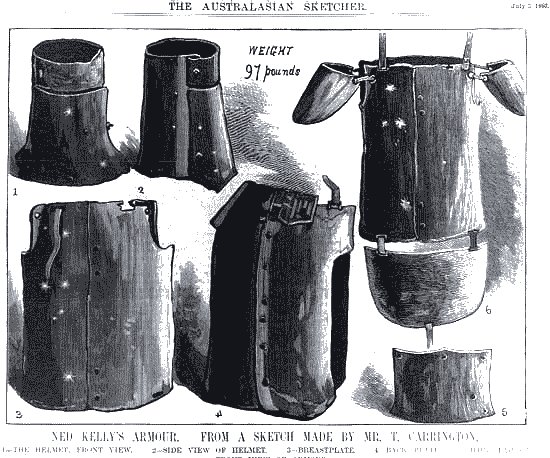 Maximilian Kreitmayer (1830–1906), who made the death mask, was a medical model maker and waxworks proprietor, who arrived in Victoria in 1856 and opened an anatomical museum. Kreitmayer is believed to have shaved Kelly’s hair and beard and taken the mold of his face in the deadhouse of the Melbourne Gaol.

These Death Masks are of prisoners who were executed in Old Melbourne Gaol. In the 1800s, the pioneers of Criminology believed that there were physical clues in the brain and skull that could help explain and aid in the understanding of criminal behavior. A death mask is an image, typically in wax or plaster cast made of a person’s face following death, often by taking a cast or impression directly from the corpse.

Proponents of phrenology used death masks and skulls to study criminal characteristics and dispositions. The brains, skulls, and death masks of hundreds of criminals were examined after death. The word Phrenology is derived from Ancient Greek words meaning “mind” and “knowledge.” Phrenology is a pseudomedicine primarily focused on the measurements of the human skull. It is now regarded as an obsolete amalgamation of primitive neuroanatomy with moral philosophy. Phrenology was influential in 19th-century psychiatry and assumed that character, thoughts, and emotions are located in specific parts of the brain.

Today, criminology and psychiatry assess criminal behavior in terms of upbringing, social background, and the mental health of an individual, not by the physical characteristics of the head and skull.

Historical Figures who lost their Skulls

Several heads from dead celebrities have gone missing over the years. The motive may be an extreme version of celebrity collectibles or in the pursuit of studies in phrenology. Phrenology was the analysis of the character of the person according to the shape of their skull. Phrenology was a field which was very much in vogue in the first half of the 1800s. For whatever reason the following historical figures were discovered to have lost all or portions of their skulls:

They all lost their heads during the height of the Phrenology period. The central phrenological notion was that by measuring the contours of the skull, one could predict personality. A German physician developed this theory in 1796, and the discipline was influential in the 19th century, especially from about 1810 until 1840. Phrenology is today recognized as pseudoscience.

Some of the early founders of the study of criminology, in the late 19th century, took a scientific approach, insisting on empirical evidence for studying crime. They suggested physiological traits such as the measurements of cheekbones or hairline, or a cleft palate could write down criminal tendencies. This approach, whose influence came via the theory of phrenology and by the theory of evolution, has been superseded. Criminologists have since rejected biological arguments.

Today the Criminologists’ consensus view of crime is that it is an act that violates the fundamental values and beliefs of society. Those values and beliefs are manifested as laws that society agrees upon.  There have also been moves in contemporary criminological theory to introduce the universal term “harm” into the criminological debate, as a replacement for the legal term “crime.”

” All men make mistakes, but a good man yields when he knows his course is wrong and repairs the evil. The only crime is pride.”
– Sophocles