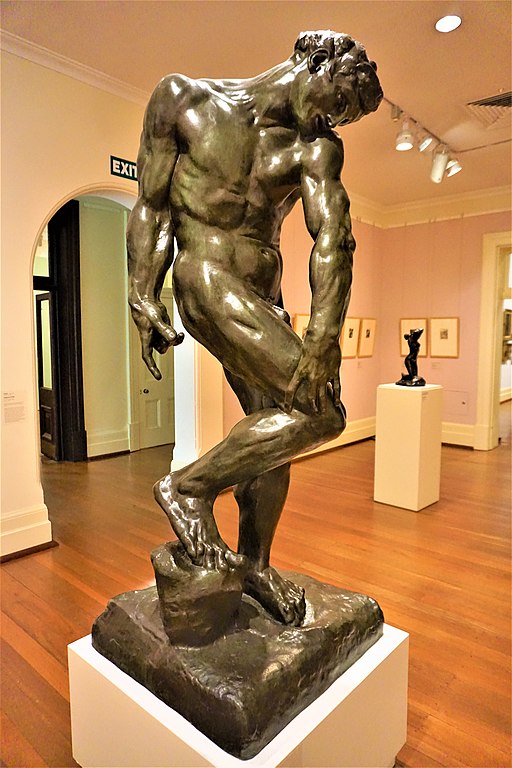 Adam, by Auguste Rodin, represents the Adam named in the opening chapters of the Book of Genesis and in the Quran for the first man created by God.

The Bible also uses the name “Adam” in a collective sense as “mankind” and individually as “a human.” Rodin’s Adam references the work of Michelangelo in art and sculpture.

The right arm with the pointing finger is taken from the painted figure of Adam on the Sistine Chapel ceiling. The left-arm references the dead Christ of Michelangelo’s sculpture of the Pietà.

This sculpture suggests the beginning of life and the end of life and can be interpreted as the sum of an individual’s experience and emotional life.

This Rodin sculpture had its genesis in 1881 when Rodin received a commission for two significant figures of Adam and Eve.

Originally he intended the pair of sculptures to be placed on either side of a sculptured bronze portal called The Gates of Hell.

This monumental sculpture piece commissioned in 1880 and which became Rodin’s life work as he continued to work on and off on this project for 37 years, until his death in 1917.

This work of Adam was the first castings in 1910. Bronze casts are now in the Art Institute of Chicago, the Musee Rodin, the Metropolitan Museum of Art, and several other leading museums.

The title and the pose of this large-scale figure of Adam attest to the influence of Michelangelo’s works, specifically the painting of Adam on the ceiling of the Sistine Chapel.

The well-developed musculature Adam by Michelangelo, which suggests physical strength, contrasts with Rodin’s Adam pose, which points to a tormented being.

Rodin’s Adam seems to emphasize his earthly bonds by having the pointed finger towards the ground. Whereas, Michelangelo shows man at the moment when God confers the divine spark of life.

Rodin’s figures in sculpture are often nude, especially “The Thinker,” as Rodin wanted his figures to represent the values and traditions of Michelangelo.

He wanted impressive figures that embody both strength and beauty to represent intellect as well as poetry.

Adam is the name used in the opening chapters of the Book of Genesis and the Quran for the first man created by God.

The Bible uses the word ‘Adam’ many times with various meanings based on the context. It is used collectively for “mankind,” individually as a “man,” as gender-nonspecific “man and woman,” and as male.

The Shade or Adam from the Gates of Hell

Quotes about Adam and Eve

“Adam knew Eve, his wife, and she conceived.”
– Bible

“Let us be thankful to Adam our benefactor. He cut us out of the ‘blessing’ of idleness and won for us the ‘curse’ of labor.”
– Mark Twain

“So hand in hand they passed, the loveliest pair that ever since in love’s embraces met – Adam, the goodliest man of men since born his sons; the fairest of her daughters Eve.”
– John Milton, Paradise Lost

“After all these years, I see that I was mistaken about Eve in the beginning; it is better to live outside the Garden with her than inside it without her.”
– Mark Twain

“Adam and Eve, according to the fable, wore the bower before other clothes. Man wanted a home, a place of warmth, or comfort, first of physical warmth, then the warmth of the affections.”
Henry David Thoreau,

“Whoever has lived long enough to find out what life is, knows how deep a debt of gratitude we owe to Adam, the first great benefactor of our race. He brought death into the world.”
– Mark Twain

Sculptures by Auguste Rodin the Artist Behind “The Thinker”