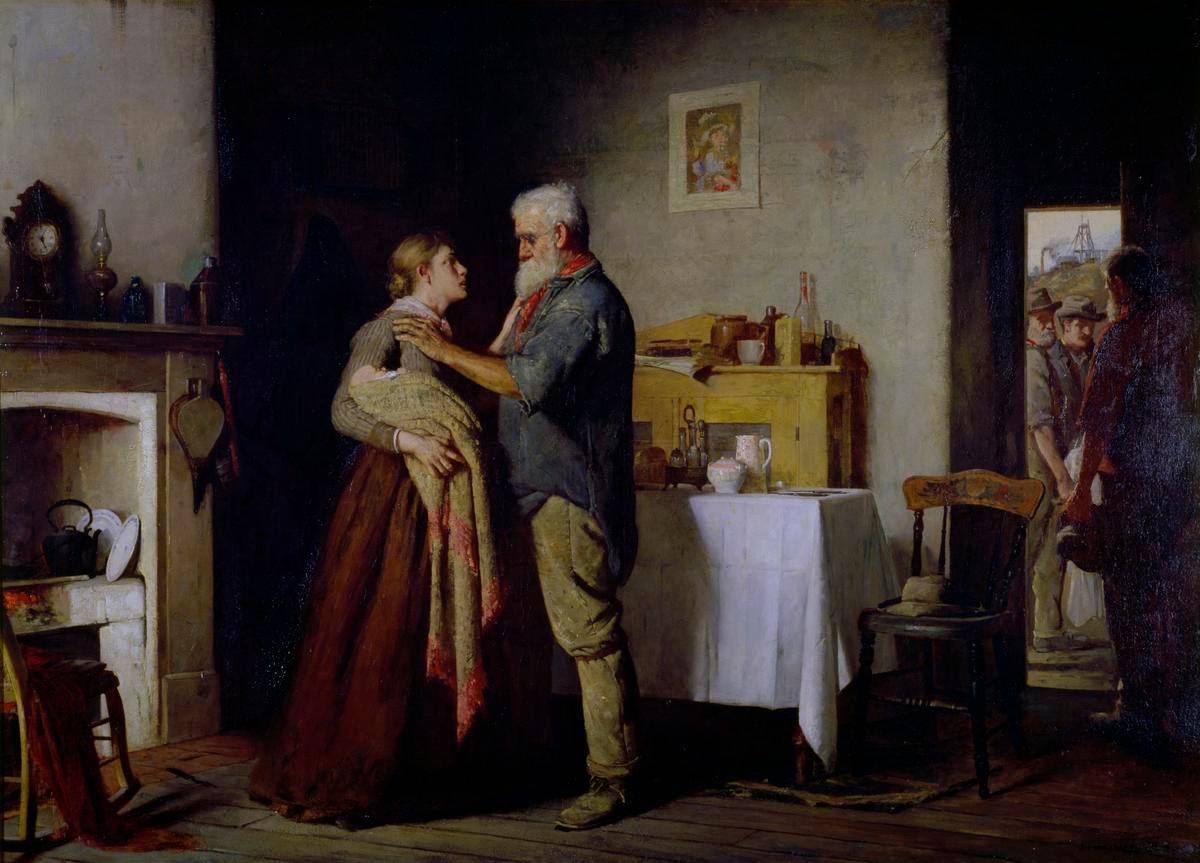 “Breaking the News” by John Longstaff

“Breaking the News” by John Longstaff depicts the scene inside a miner’s cottage. It shows an old miner breaking the unbearable news to a young woman, informing her husband’s death in a mining accident.

The woman holds an infant in her arms, and two other miners are at the doorway, carrying the body of the husband on a stretcher.

“Breaking the News” became etched in the popular imagination, and by the 1890s was “known by reproduction in every mining township in Australia.” Painted when Longstaff was still an art student, it won him a traveling scholarship in 1887.

At the time, it was described as “a vivid and accurate presentment of a familiar incident in Australian life.” According to a biographer, Longstaff’s childhood memory of a mining fatality was the direct inspiration for “Breaking the News”:

“following the tragic cortège from mine-head to the cottage door, he had heard the stricken cry of the young wife at the sight of the stretcher-bearers’ burden.”

Writer and poet Henry Lawson, after viewing “Breaking the News,” wrote glowingly about the painting’s emotional and social impact in an 1899 essay.

In turn, J. F. Archibald, the then owner of this painting, commissioned Longstaff to paint a portrait of Lawson. Archibald greatly admired the picture, prompting him to set up a bequest for the Archibald Prize, now Australia’s most prestigious prize for portraiture.

Longstaff went on to win the Archibald five times.

John Longstaff Longstaff was appointed an official war artist with the Australian Infantry Force in the First World War. He was later knighted for his services in 1928, the first Australian artist to have had this honor.

Breaking the news by John Longstaff

The Archibald Prize was the first major prize for portraiture in Australian art. It was first awarded in 1921 after the receipt of a bequest from J. F. Archibald, the editor of The Bulletin, who died in 1919.

It awards the best portrait, painted by an artist resident in Australia during the twelve months preceding the date fixed for sending in the pictures.

“Art, of course, is a way of thinking, a way of mining reality.”
– John Gardner