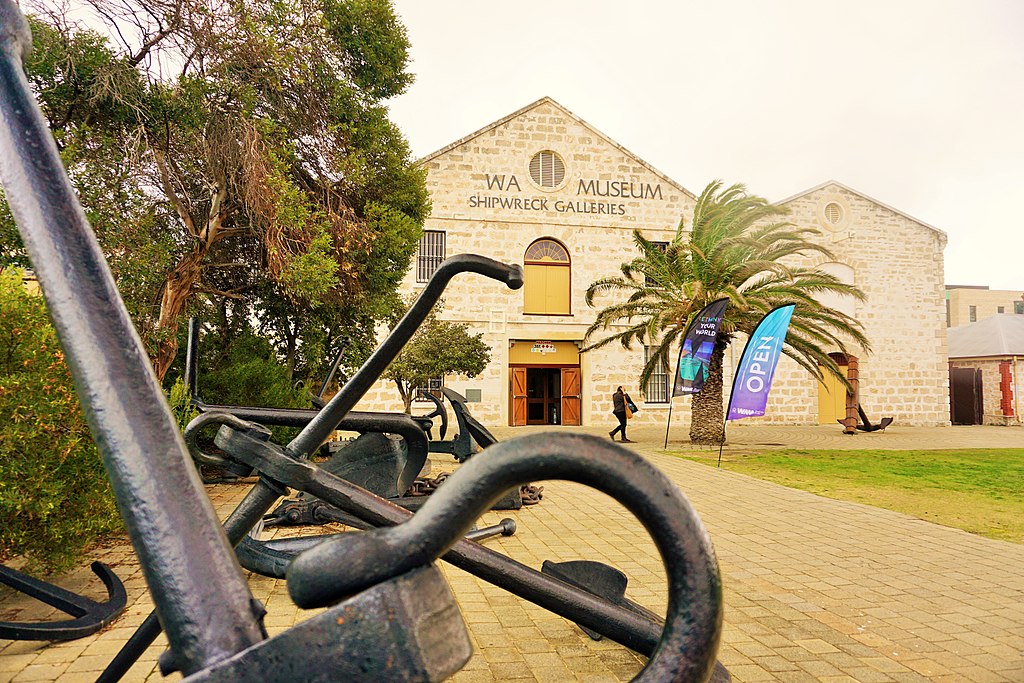 The WA Shipwrecks Museum is a maritime archaeology museum housed in the 1850s-era restored Commissariat building.

The galleries house relics from ships wrecked along WA’s treacherous coastline, including the original timbers from the Batavia, wrecked in 1629, and historical artifacts from the Dutch shipwrecks Zuytdorp, Zeewijk and Vergulde Draeck.

The “de Vlamingh Plate” is a pewter dish that has been flattened and inscribed with a record of Willem de Vlamingh’s historic journey.

It was left as a signpost of his visit and landing on the western Australian coast in 1697. The de Vlamingh Dish is preserved in an atmosphere of inert gas, argon, to reduce corrosion.

The Dutch tradition of signposting the Australian coast with a plate started in 1616, over 400 years ago, when Dirk Hartog became the first European to land on the western coast of Australia.

Hartog left behind a flattened pewter dish inscribed with a record of the details of his historic journey.

The Dutch established a long history of contact with Australia’s western coastline, and in 1697, the Dutch captain Willem de Vlamingh discovered Hartog’s plate and replaced it with his own, the de Vlamingh Plate.

The “Batavia Timbers” are original timbers from the ship Batavia of the Dutch East India Company. The Batavia was built in Amsterdam in 1628 and shipwrecked, on her maiden voyage, off the Western Australian coast.

The story of the Batavia was made famous by the subsequent mutiny and massacre of nearly 100 people that took place among the survivors.

In 1629 the Batavia struck a reef near Beacon Island, off the Western Australian coast. Of the 322 aboard, most of the passengers and crew managed to get ashore on the island, although 40 people drowned, the survivors included women and children.

The wreck site lacked water and food, so a small group led by the Captain left the wreck site in a longboat in search of drinking water.

After an unsuccessful search for water, they abandoned the survivors and headed north on a hazardous voyage to the city of Batavia, now known as Jakarta. After their arrival to the town of Batavia, the Governor-General sent a rescue for the other survivors.