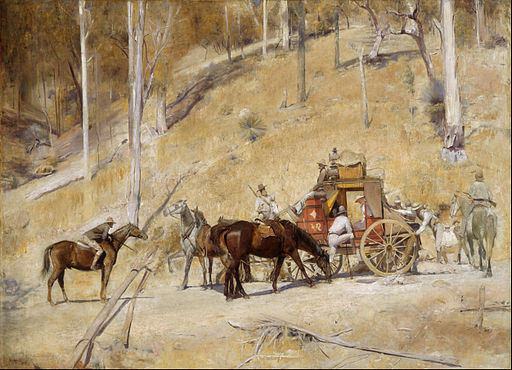 “Bailed Up” by Tom Roberts

“Bailed Up” by Tom Roberts depicts a distinctive Australian subject of a stagecoach held up by bushrangers in a forested section of an isolated road.

At this sheep station, he also painted “The Golden Fleece,” a famous painting depicting sheep shearing.

Still, it would have influenced Roberts and helped him conceived the idea of painting this subject.

This painting presents the story of Captain Thunderbolt (Frederick Ward) holding up the Inverell–Glen Innes mail-coach.

Roberts is beautifully depicting a crackling dry landscape in the heat and light of a high summer’s day in the Australian bush. It took 33 years for this iconic painting to find a buyer, and in 1927, Roberts reworked this painting to simplify the work making it more abstract.

Tom Roberts was a leading figure in promoting open (in full) air painting. He encouraged other Australian artists to capture the national life of Australia.

He is best known for his “national narratives,” among them Shearing the Rams, A Break Away! and Bailed Up.