“Cymon and Iphigenia” by Frederic Leighton

“Cymon and Iphigenia” by Frederic Leighton depicts a mythological story about “Cymon” which means “the brute,” who one day while walking in the woods, discovered a young woman, “Iphigenia,” fast asleep in a meadow under a tree, and her beauty awoke his soul.

This parable of grace soothing the savage beast inverts the myth of “Sleeping Beauty,” in which a man awakens a young woman to adulthood. In this mythological story, the woman inspires the male, brute.

“Iphigenia” is derived from Greek (iphios) “strong” and (genes) “born.” Her name means “strong-born” or “born to strength.” In Greek myth, Iphigenia was the daughter of King Agamemnon.

After King Agamemnon offended the goddess, Artemis, the only way to appease the goddess was to sacrifice Iphigenia. Just as Agamemnon was about to sacrifice his daughter, she was safely transported to the city of Taurus.

The story of “Cymon and Iphigenia” is from the “Decameron,” a collection of novellas by the 14th-century Italian author Giovanni Boccaccio (1313–1375).

The expressiveness of Iphigenia’s elaborate, swirling drapery was influenced by Frederic Leighton’s study of the drapery on the statues from The Parthenon Marbles.

The Marbles had an impact on many British artists of the time. Leighton’s love for the classical world is artfully presented in this masterpiece.

In the original story, Iphigenia was mostly naked. However, Leighton, who painted in the Victorian Era, chose to cloth Iphigenia in drapery that contoured her body to ensure that the viewer’s gaze locked onto her figure.

The drapery pays homage to Hellenistic sculpture and enhances her beauty and elegance. Leighton also explored the best way for her raised arms to be positioned to produce an alluring posture.

A study of Iphigenia, black and white chalks on brown wove paper from Leighton House Museum.

Leighton spent months searching for a model to match his imagined ideal of Iphigenia, for his intended portrayal in this painting. He found his model in a young actress, Dorothy Dene.

Dene possessed what Leighton felt was a classical Greek style of beauty.  She had golden wavy hair, graceful arms, and legs, and she has featured in several later works by Leighton.

Including: “The Bath of Psyche,” “Clytie,” “Perseus and Andromeda,” “Solitude,” “The Return of Persephone,” and “The Vestal.” 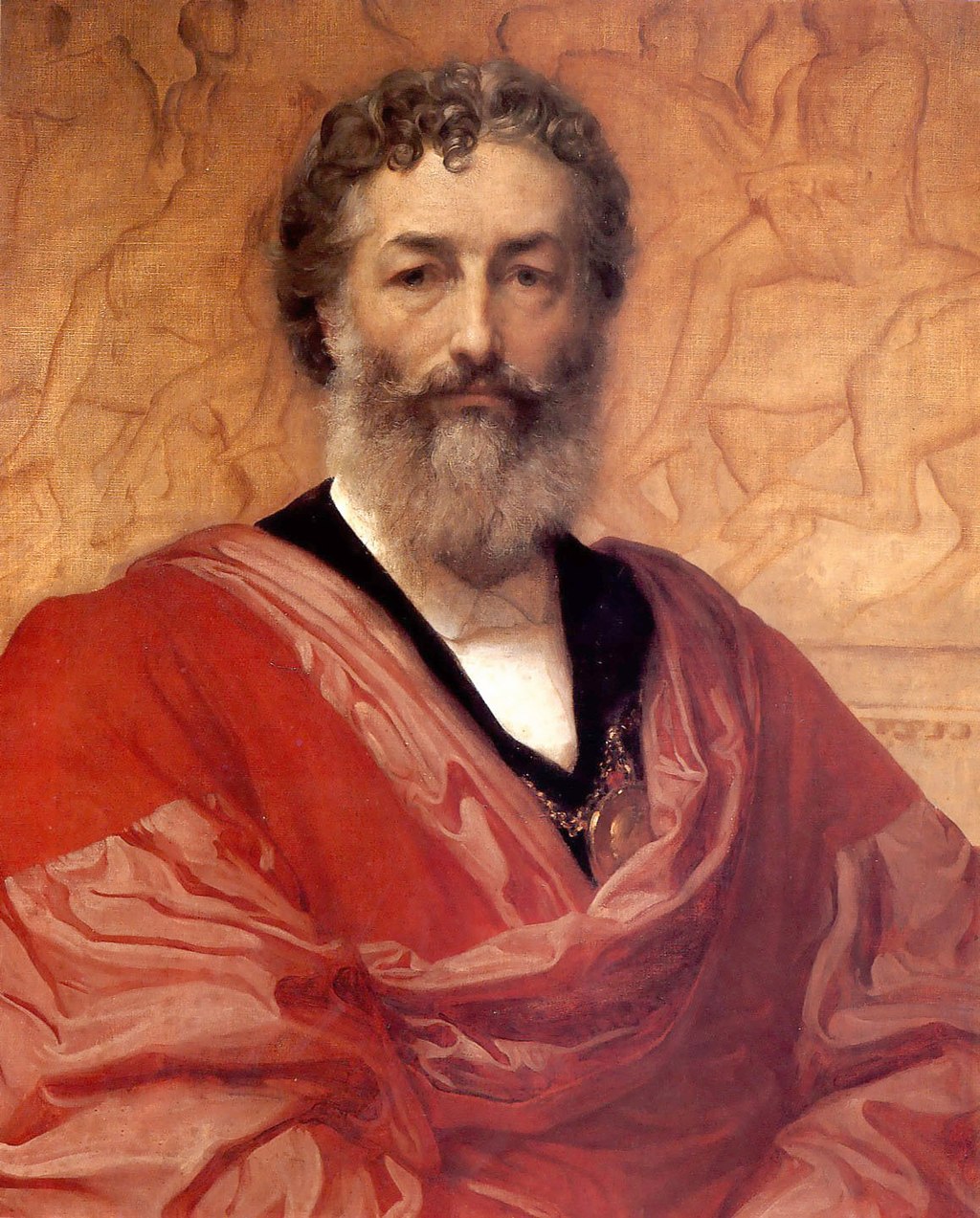 He was successful and famous during his lifetime and was the bearer of the shortest-lived peerage in history, 1st Baron Leighton.

After only one day, his hereditary nobility became extinct upon his death. Leighton remained a bachelor with no legitimate children.

It has many of his drawings and paintings, as well as some of his former art collection.

“Nights through dreams tell the myths forgotten by the day.”
– C.G. Jung