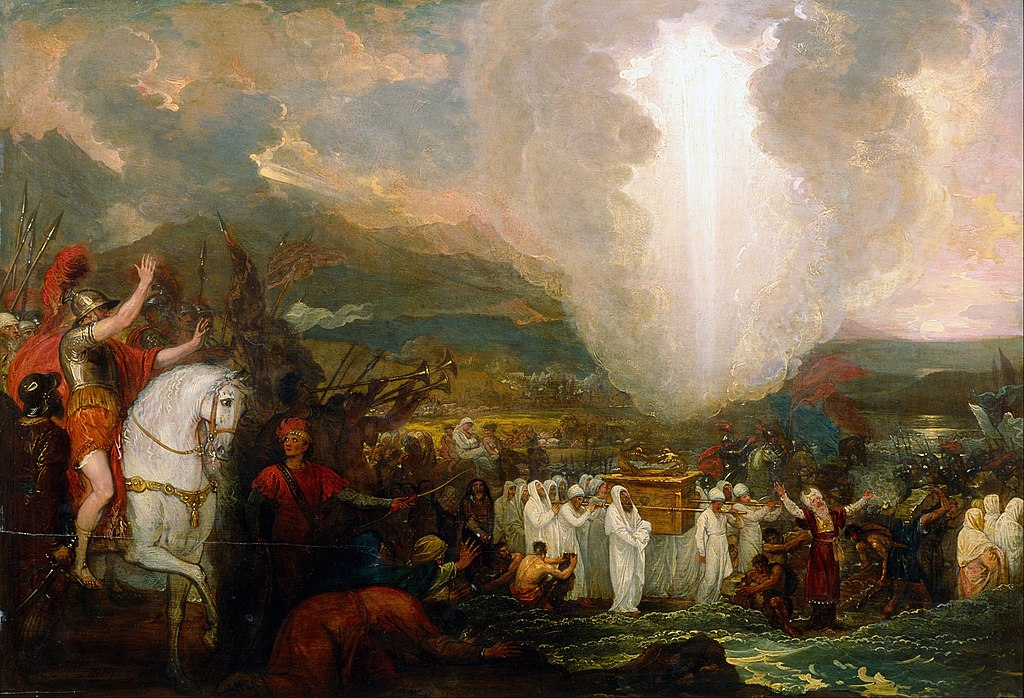 After wandering in the desert 40 years, the Israelites finally approached the boundary of the Promised Land.

When the Israelites, led by Joshua toward the Promised Land, arrived at the banks of the Jordan river, the Ark was carried in front of the people and was the signal for their advance.

During the crossing, the river grew dry as soon as the feet of the priests carrying the Ark touched its waters, and remained so until the priests, with the Ark, left the river after the people had passed over.

On that day, God commanded the Israelites to commemorate and celebrate the occasion by erecting twelve stones with the text of the Torah engraved upon them.

The stones represented the Jewish nation’s twelve tribes and their gratitude for God’s gift of the Land of Israel.

As memorials, twelve stones were taken from the Jordan at the place where the priests had stood.

The rock details are in Benjamin West’s painting; however, the Ark is also shown uncovered, which is not in accordance with the Bible.

When carried, the Ark was always hidden under a large veil made of skins and blue cloth, always carefully concealed.

Yom HaAliyah (Aliyah Day‎) is an Israeli national holiday celebrated annually to commemorate the Israelites crossing the Jordan River into the Land of Israel while carrying the Ark of the Covenant.

The pillar of cloud is traditionally paired with the manifestation of the divine presence by night as the pillar of fire, which provided light.

“By day the Lord went ahead of them in a pillar of cloud to guide them on their way and by night in a pillar of fire to give them light so that they could travel by day or night.”
– Exodus 13:21–22

Joshua was a central figure in the Hebrew Bible. He was Moses’ assistant and became the leader of the Israelite tribes after the death of Moses. According to the Bible, he was born in Egypt before the Exodus.

At the Jordan River, the waters parted, as they had for Moses at the Red Sea. The first battle after the crossing of the Jordan was the Battle of Jericho. Joshua led the Israelite in the destruction of Jericho.

Ark of the Covenant

The Ark of the Covenant was a gold-covered wooden chest with lid cover described in the Book of Exodus as containing the two stone tablets of the Ten Commandments.

The biblical account relates that approximately one year after the Israelites’ exodus from Egypt, the Ark was created according to the pattern given to Moses by God when the Israelites were camped at the foot of Mount Sinai.

After that, the gold-plated Ark was carried in advance of the people when on the march or before the Israelite host of fighting men.

The Jordan River is a 251-kilometer-long (156 mi) river in the Middle East that flows roughly north to south through the Sea of Galilee and on to the Dead Sea.

The river holds major significance in Judaism and Christianity since the Bible says that the Israelites crossed it into the Promised Land and that Jesus of Nazareth was baptized by John the Baptist in it.

Joshua passing the River Jordan with the Ark of the Covenant

He impressed King George III and was mostly responsible for the launch of the Royal Academy, of which he became the second president after Sir Joshua Reynolds.

When the Jordan River Stopped for Joshua

Here Joshua and the twelve tribes crossed the Jordan River