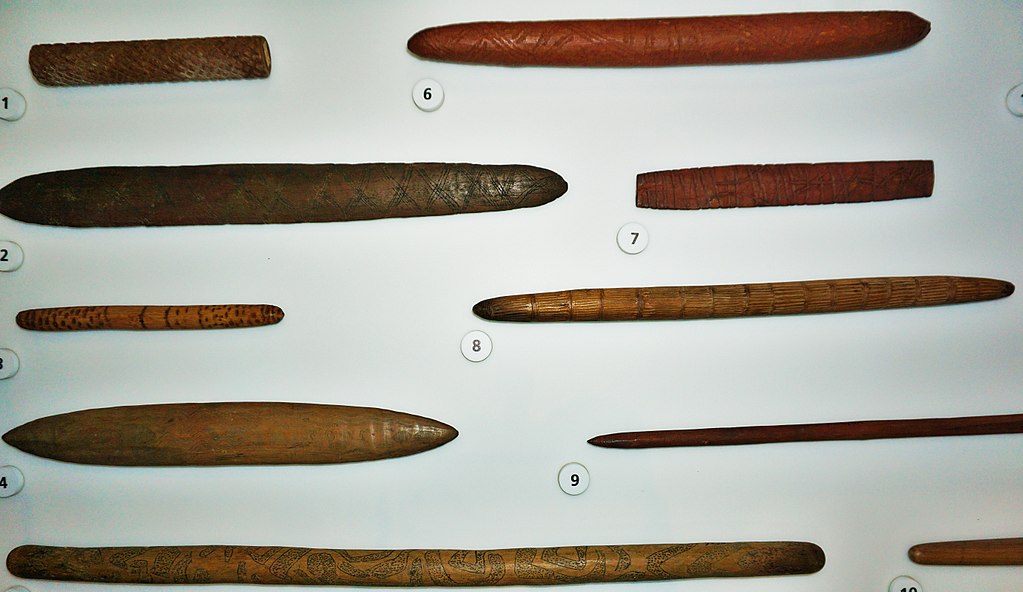 These Australian Aboriginal Message Sticks are a form of communication traditionally used by Indigenous Australians. It is usually a solid piece of wood, of varying length, etched with angular lines and dots.

The patterns were used as a general reminder of the message.

Traditionally, message sticks were passed between different clans and language groups to send messages. They were often used to invite neighboring groups to corroborees, set-fights, and games.

An Australian anthropologist wrote of the Wurundjeri people of the Melbourne area:

“The oldest man having made a message stick hands it to the old man nearest to him,
who inspects it and, if necessary, adds further marks ….
Finally, the stick having passed from one to the other of the old men present is handed to the messenger…”

Message Sticks are often commonly called letters by Aboriginal people. They were transmitted by messengers, who could travel hundreds of kilometers to deliver them.

The carrier of the message stick was granted safe passage across other aboriginal nation’s lands.

Australian Aboriginals refer to the people who are members of the several hundred Indigenous peoples of Australia. The category “Aboriginal Australia” was coined by the British after they began colonizing Australia in 1788.

The term was used to refer collectively to all the people they found already inhabiting the continent. Later the term described the descendants of any of those people.

Within each region or country, people lived in clan groups: extended families defined by various forms of Australian Aboriginal kinship.

Today, the most significant single language group of Aboriginal people live in the area around Uluru (Ayers Rock) and south into South Australia. T

he second-largest Aboriginal distinct community lives in and around Alice Springs in the Northern Territory.

“We are all visitors to this time, this place. We are just passing through.
Our purpose here is to observe, to learn, to grow, to love… and then we return home.”
– Australian Aboriginal saying