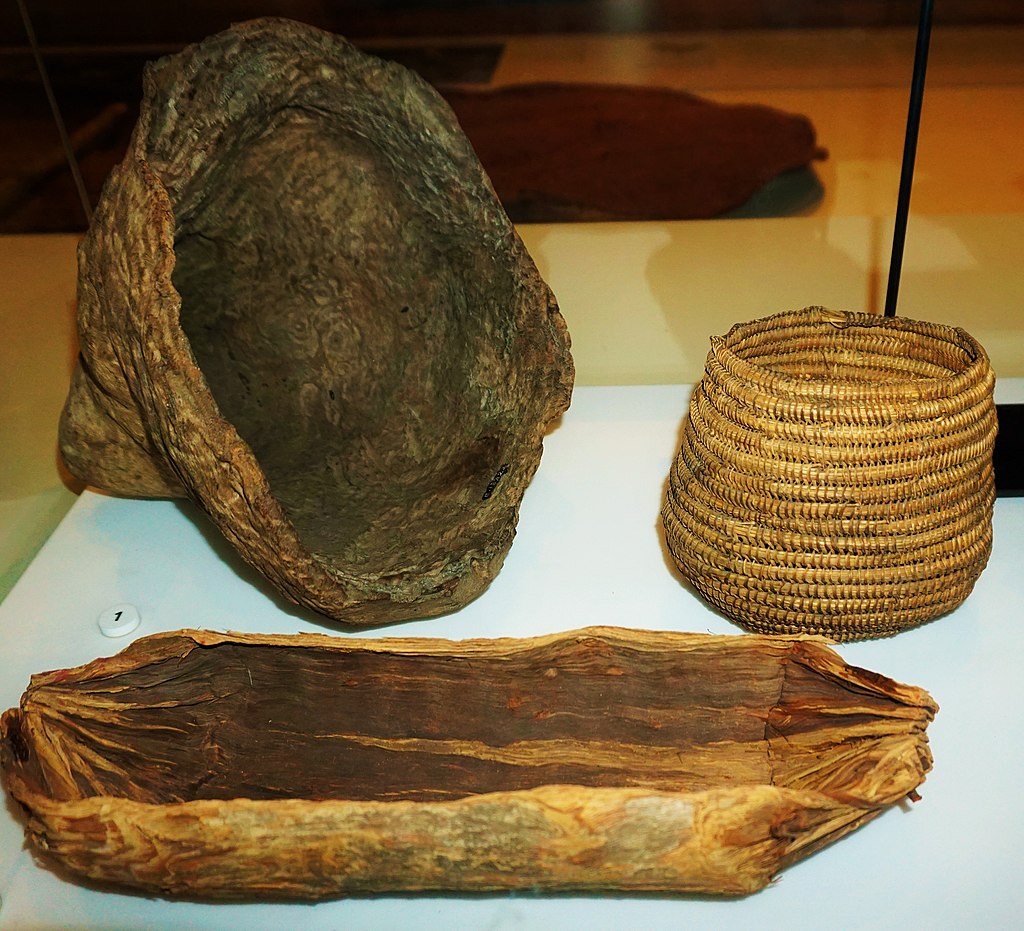 Coolamons were used for winnowing grains in the traditional bread-making process. They were also used for general heating and cooking vessel.

Above is a Bark Water Holder from Flinders Island, Queensland, and was acquired in 1905 by the Museum.

This container was made from the bark shell of a knot formed on a eucalyptus tree trunk. The inside of the eucalyptus tree knot was then burnt and smoothed with stone and shells.

The Coiled Reed basket was acquired in 1937 from Tambo, central-west Queensland. The Paperback Coolamon was obtained from Western New South Wales.

Coolamons were traditionally used by Aboriginal women to carry water, fruits, nuts, as well as to cradle babies.

Coolamons were often carried on the head when traveling or under the arm as a cradle.

If carried on the head, a ring pad, called ‘akartne’ in Arrernte Aboriginal language, was placed on the head, made out of possum or human hair string, twisted grass or feathers to help support the carriage of the coolamon. 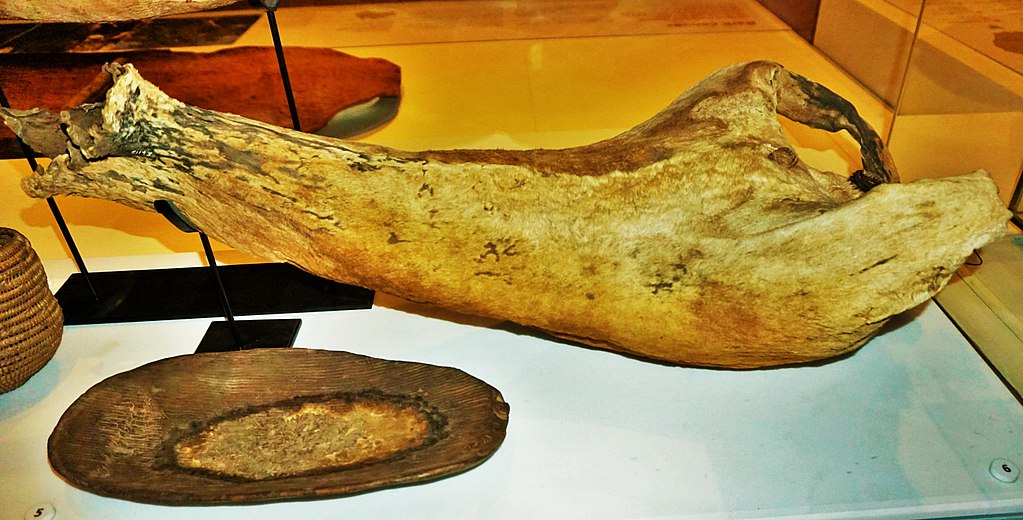 Above is shown a Tanned Kangaroo Skin Water Bag, which was made with Coolibah gum and plant fiber and was used for carrying water over long distances.

This aboriginal artifact was acquired in 1893 from the Urania people at the Toko Waterhole, Toko Range, and Gorge in north-west Queensland.

Aboriginal Australians were limited to the range of foods occurring naturally in their area, but they knew exactly when, where, and how to find everything edible.

Anthropologists and nutrition experts who have studied the tribal diet in Arnhem Land found it to be well-balanced, with most of the nutrients modern dietitians recommend.

Both men and women had to spend from half to two-thirds of each day hunting or foraging for food.

Each day, the women of the group went into successive parts of one countryside with wooden digging sticks and plaited dilly bags or wooden coolamons.

Larger animals and birds, such as kangaroos and emus, were speared or disabled with a thrown club, boomerang, or stone.

Many Indigenous hunting devices were used to get within striking distance of prey.

The men were excellent trackers and stalkers, approaching their prey running where there was the cover, or ‘freezing’ and crawling when in the open.

They were careful to stay downwind and sometimes covered themselves with mud to disguise their smell.

The typical Aboriginal diet included a wide variety of foods, such as kangaroo, emu, wombats, goanna, snakes, birds, many insects such as honey ants, Bogong moths, and witchetty grubs.

Many varieties of plant foods such as taro, coconuts, nuts, fruits, and berries were also eaten.

What Aboriginal knowledge can teach us about happiness

A Tour of Australian Aboriginal Artifacts and Stories

The myth of Aboriginal stories being myths

A real history of Aboriginal Australians