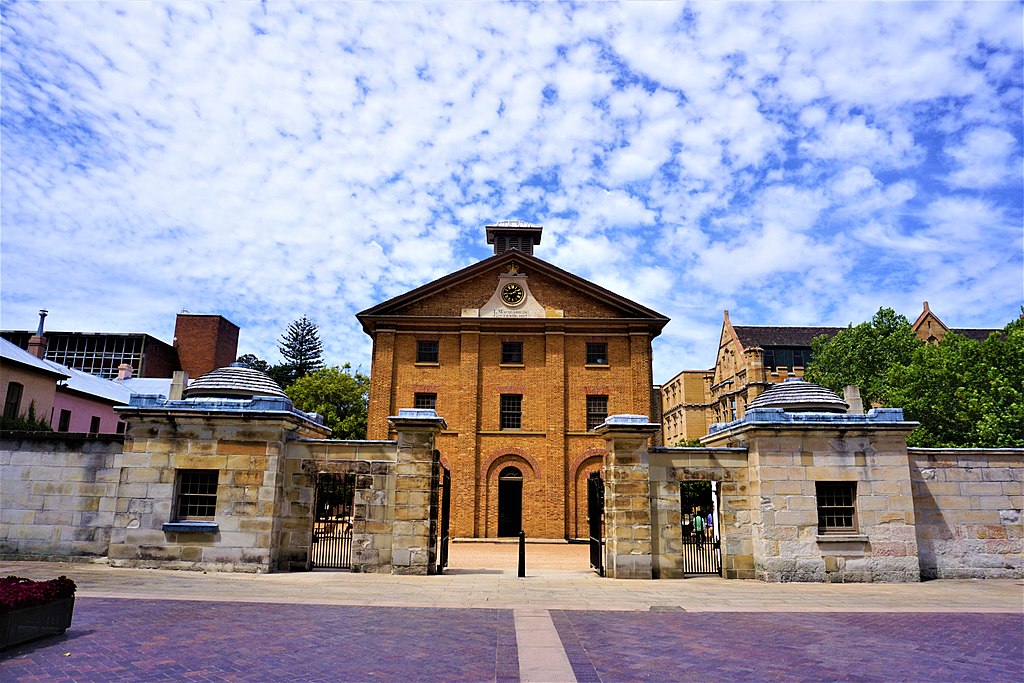 The Hyde Park Barracks Museum is a brick building and compound designed by convict architect Francis Greenway in 1819 to house convict men and boys.

Inscribed on the UNESCO World Heritage List as a pre-eminent Australian Convict Sites as amongst “the best surviving examples of large-scale convict transportation and the colonial expansion of European powers through the presence and labor of convicts.”

Today, Hyde Park Barracks is a museum that allows the exploration of the lives of convicts and other occupants through exhibitions on Sydney’s male convict labor force, Australia’s convict system, excavated artifacts, exposed layers of building fabric and the Barrack’s rooms and spaces.

These Bricks were convict made, as the first brick makers in Australia were convicts. Within months of the arrival of the First Fleet, bricks were being produced by convicts to start the effort to build permanent structures.

The first bricks were made at a site in Darling Harbour, and as the colony grew, for buildings on the outskirts of Sydney, it was cheaper to use convicts to hand-make bricks and dry them in the sun, rather than paying for bricks to be transported from the factories in the center of Sydney.

Convict bricks are easily identifiable as they often have a distinctive mark on them, such as broad arrows, hearts, diamonds, and frogs as patterns.

The unique making on the brick is called a “frog.” It was used to identify the brickmaker, and it allowed the mortar to bind the brick more effectively.

From 1819 onwards, all government-made bricks were marked with a broad arrow, and later in the 1830’s the shapes of playing cards such as hearts, diamonds, and spades were used to “frog” bricks.

These bricks are part of the thousands of bricks that were molded, fired, and delivered to build Hyde Park Barracks, Sydney.

“Joseph Smyth’s Copper Heart” is a ‘Convict Love Token, ‘ which is a coin engraved by a convict with details and messages of affection. This example is an etched copper George III halfpenny, with the words:

on the reverse side are the words:

Smoothing and engraving a coin with a message of affection was one of the few ways a convict could leave a memento behind with loved ones before being transported.

These small tokens are also known as ‘leaden hearts.’ They record personal and emotional messages from convicts to loved ones.

The tokens often include the names of the convict and their loved one’s name and popular phrases or rhymes. They were frequently engraved around the time of conviction for a prisoner’s loved one.

The tokens were engraved or stippled, by making marks with a series of small pinpricks.

Government Records show that Joseph Smyth was tried for burglary in 1817 and sentenced to death. That was when he created this ‘Love Token.’

Later his sentence was commuted to ‘Transportation for Life’ to the colony of New South Wales.

Smyth was a brickmaker by trade, and on arrival to Sydney in 1915, we may have been involved in building Hyde Park Barracks, and later, he may have also lived in the barracks.

Government Records also show that his wife was convicted under a similar sentence and was also transported to New South Wales.

The records record her name as Maria Smith. The spelling of Smith was interchangeable with Smyth.

Did the Mary mention in the ‘Love Token’ commit a crime to be transported and reunited with Joseph?

A new convict arrival at the Hyde Park Barracks

“Those who lose dreaming are lost.”
– Australian Proverb