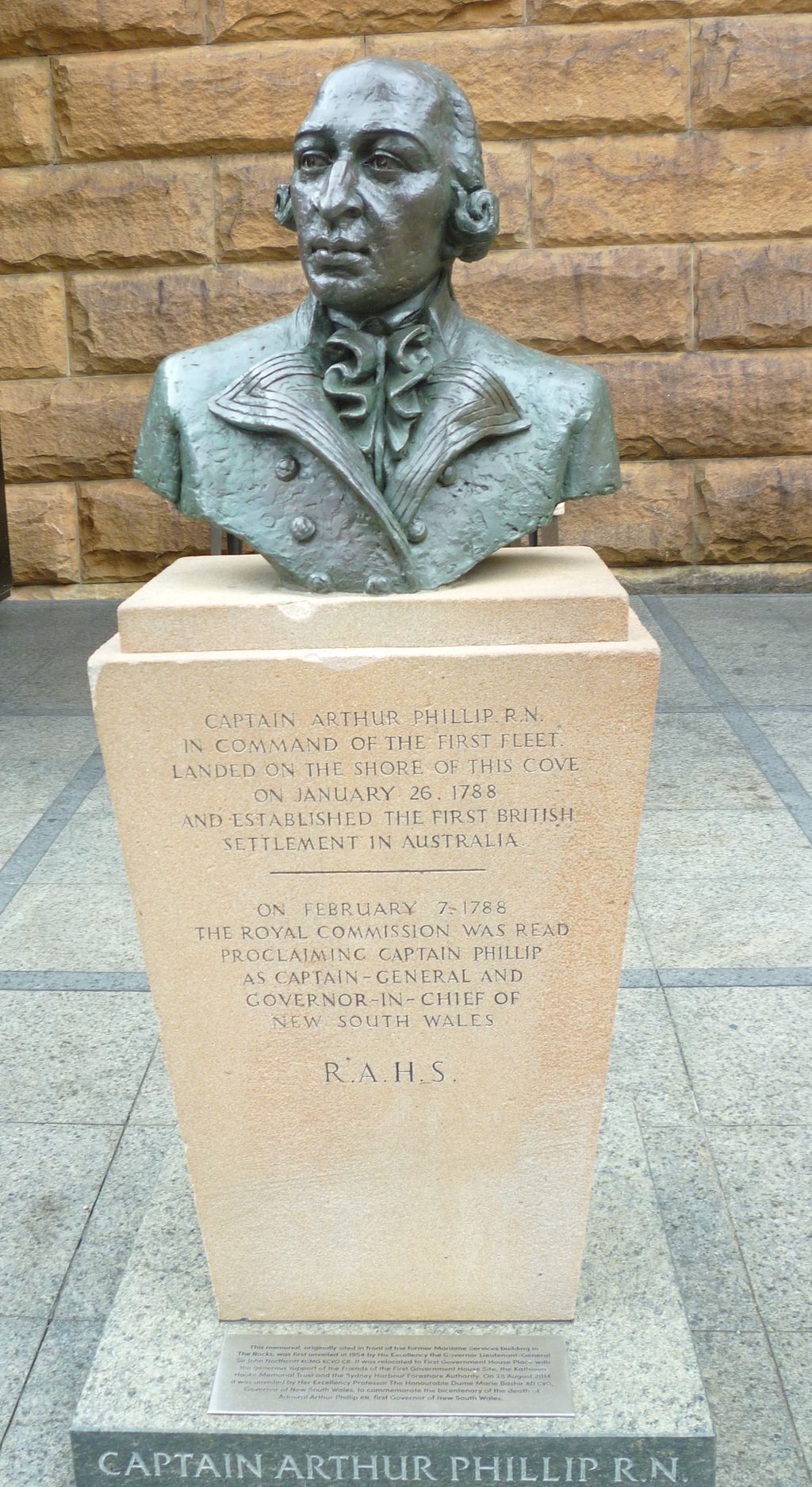 This memorial of Captain Arthur Phillip was initially unveiled in 1953 in front of the former Maritime Services building in The Rocks. It was relocated to its current location, the site of the First Government House, in 2014 to commemorate the bicentenary of Arthur Phillip’s death.

Admiral Arthur Phillip (1738 – 1814) was a Royal Navy officer and the first Governor of New South Wales who founded the first British penal colony that became the city of Sydney. After a long career in the Royal Navy, Phillip sailed with the First Fleet as Governor-designate of the British penal colony of New South Wales. In January 1788, he selected its location to be Port Jackson in Sydney Harbour.

The arrival of the Second and Third Fleets placed more pressure on scarce resources, but by the time Phillip sailed home in 1792, the colony was established with land-grants and systematic farming and water supply.

Phillip was a far-sighted governor who soon saw that New South Wales would need a civil administration and a system for emancipating the convicts. But his plan to bring skilled tradespeople on the voyage had been rejected, and he faced immense problems of labor, discipline, and supply. His friendly attitude towards Aboriginal people was also sorely tested when they killed his gamekeeper, and he was not able to assert a clear policy about them.

The British Government decided to found the Botany Bay colony in mid-1786. Lord Sydney, as Secretary of State for the Home Office, was the minister in charge, and he appointed Phillip commodore of the fleet, which was to transport the convicts and soldiers who were to be the new settlers to Botany Bay. Upon arrival there, Phillip was to assume the powers of Captain-General and Governor in Chief of the new colony. A subsidiary settlement was to be found on Norfolk Island to take advantage of the island’s native flax and timber.

Eleven ships in the First Fleet set sail in 1787, and HMS Supply reached Botany Bay, setting up camp on the Kurnell Peninsula, eight months later. Phillip soon decided that this site was not suitable and decided to go on to Port Jackson, and on 26 January 1788, the marines and convicts landed at Sydney Cove, which Phillip named after Lord Sydney.

By 1792 the colony was established, and ships were visiting Sydney to trade, and convicts whose sentences had expired were taking up farming. John Macarthur and other officers were importing sheep and beginning to grow wool. The colony was still very short of skilled farmers, artisans, and tradespeople, and the convicts were working mainly to grow their food.

In late 1792 Phillip relinquished his governorship and sailed for England. The European population of New South Wales at his departure was 4,221, of whom 3,099 were convicts. The early years of the colony had been a struggle of survival, but the worst was over. Phillip arrived in London in 1793. He tendered his formal resignation and retired in 1805, but continued to correspond with his friends in New South Wales and to promote the colony’s interests.

Australia Day is the official national day of Australia. Celebrated annually on 26 January, it marks the anniversary of the 1788 arrival of the First Fleet of British ships at Port Jackson, Sydney, and the raising of the Flag of Great Britain at Sydney Cove by Governor Arthur Phillip.

The meaning and significance of Australia Day have evolved and been challenged. Indigenous Australians, and those sympathetic to their cause mourning what they see as the invasion of their land by Europeans and protesting its celebration as a national holiday. These groups sometimes refer to 26 January as Invasion Day, Survival Day, or Day of Mourning and advocate a change in the meaning of Australia Day.

Highlights of the Museum of Sydney

“Those who lose dreaming are lost.”
– Australian Proverb