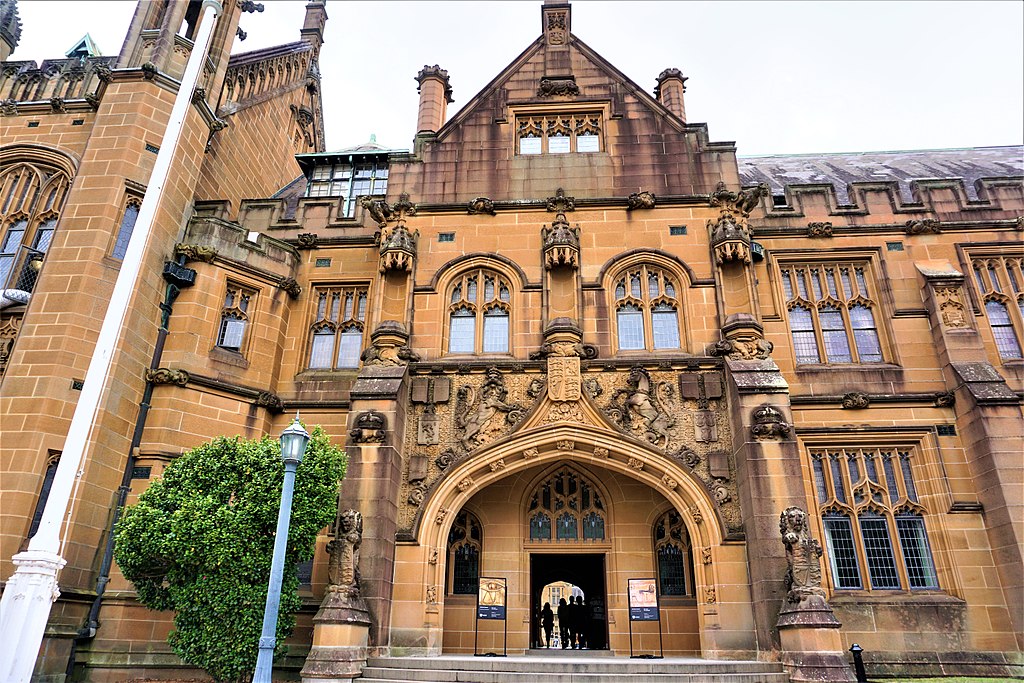 The Nicholson Museum is home to the most extensive ancient historical collection of Australia. The collection includes ancient Egypt, Greece, Italy, Cyprus, and the Near East. The museum has a mixture of permanent and temporary exhibition areas within its gallery.

Highlights of the Nicholson Museum

This Sculpture of Hermes is larger-than-life-size and carved from white marble, the surface of which is deeply weathered. The grooves on the surface of the statue were caused by the hundreds of years that it was submerged in running water of a stream. The figure is a copy of an earlier ancient masterpiece, tracing its roots back to a famous statue of Hermes sculpted by the 4th century BC artist Praxiteles. The muscular body and the slim waist portrays the Greek ideal and may have functioned initially as a grave marker.

Hermes is an Olympian god in Greek religion and mythology, the son of Zeus, and was the emissary and messenger of the gods. Hermes was also the divine trickster and the god of boundaries. He moved freely between the worlds of the mortal and divine and was the conductor of souls into the afterlife. Many of his statues include his Greek symbol, which appears in the form of two snakes wrapped around a winged staff. In the Roman adaptation of the Greek pantheon, Hermes is identified with the Roman god Mercury. 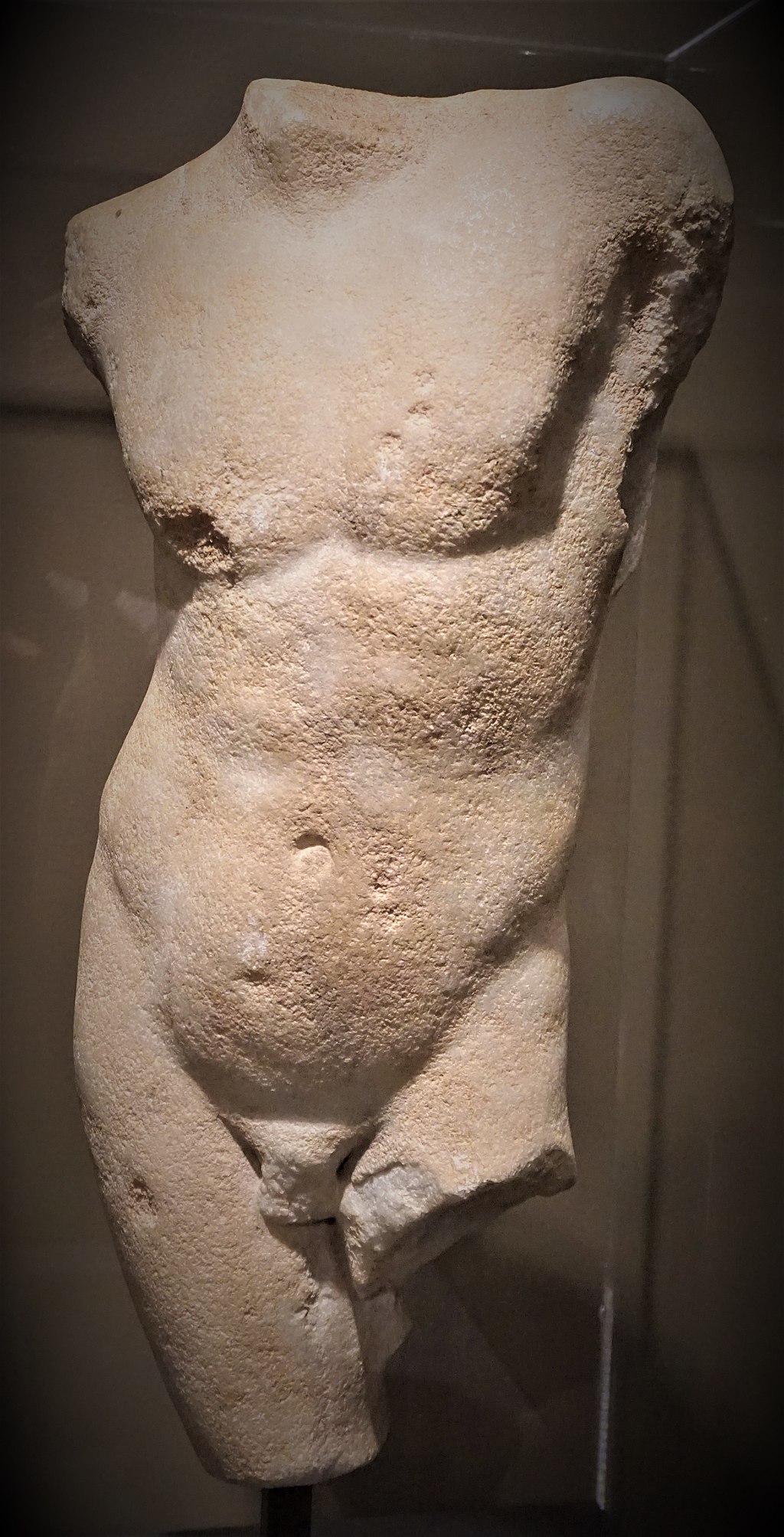 This figure of Apollo represents one of the most important of the Olympian gods in classical Greek and Roman religion and mythology. Apollo was the ideal of the kouros (a beardless, athletic youth). He was identified as a god of music, truth, and prophecy, healing, the sun, and more. The muscular body and the slim waist of this figure demonstrate the Greek desire for health and the physical capacity, which was necessary for the challenging Greek environment. The many statues of Apollo embody beauty, balance, and inspire awe before the beauty of the world.

Apollo is a common theme in Greek art, and the Greeks put into Apollo the highest degree of power and beauty that they could imagine. The evolution of the Greek sculpture can be observed in Apollo’s depictions from the static formal and frozen ‘Kouros-type’ in the early archaic period to the representation of motion in marble, which was achieved in the late archaic period. In classical Greece, the emphasis was on the ideal form, which was created by master sculptor Polykleitos. Later Praxiteles released sculpture from its religious conformities, and his masterpieces represent the resulting natural style which the world appreciates today. 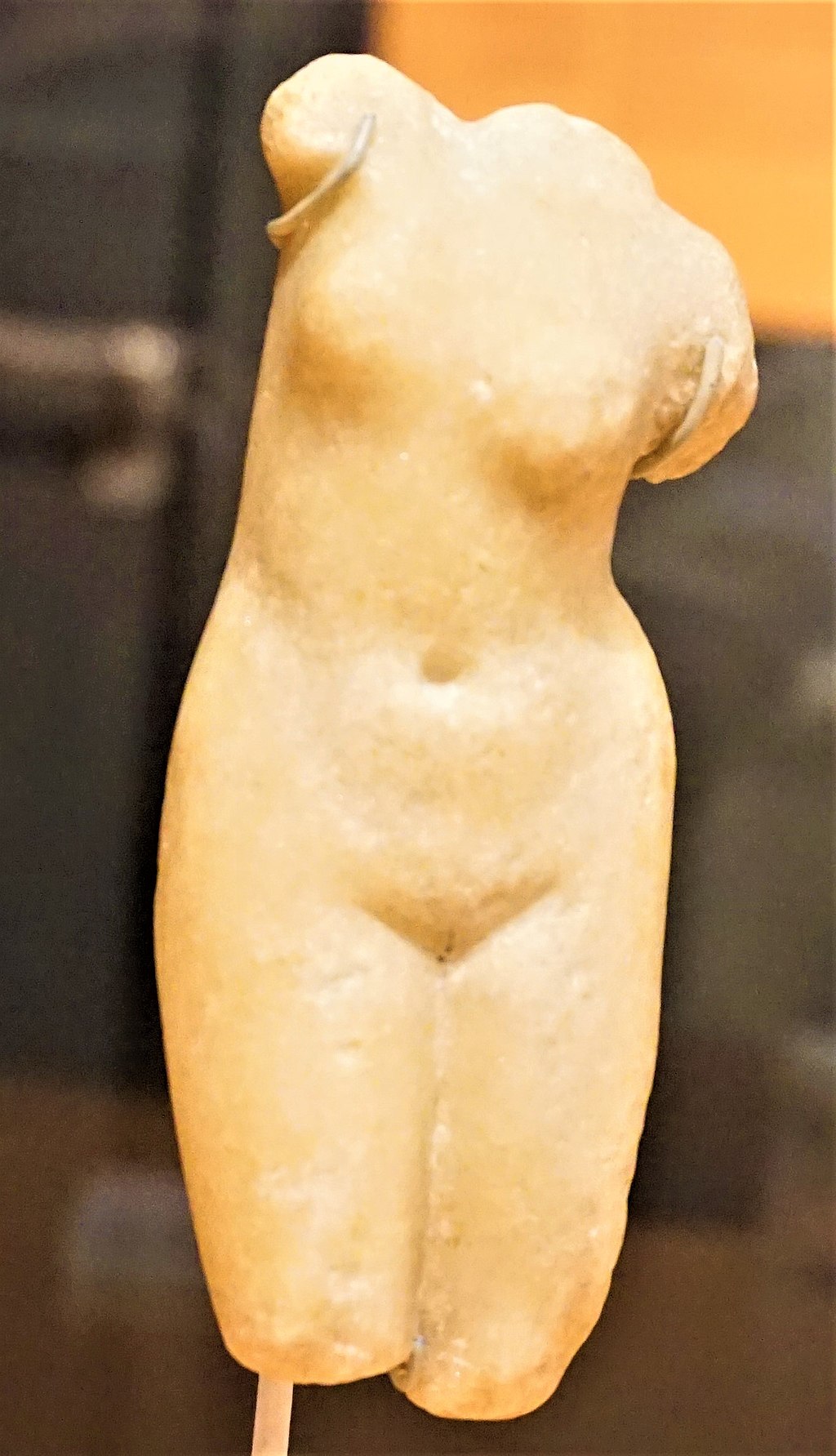 This Figurine of Aphrodite is only 11 centimeters high and missing its head and limbs. However, she is a masterpiece in the classical depiction of the female form and a beautiful representation of the human body. Mythological tradition claims that Aphrodite was born naked in the seafoam off the coast of a Greek island, and Hellenistic sculptors leaped at this tradition to experiment with the nude female form. The torso of this figurine is twisted slightly by the contrapposto pose, with all weight on the raised left hip and straightened left leg, and her right breast turned slightly. This form was famous for centuries.

Aphrodite is the ancient Greek goddess of love, beauty, pleasure, and procreation. She is identified with the planet Venus, which is the name of the Roman goddess Venus, who the Romans called their equivalent of the Greek goddesses, Aphrodite. The cult of Aphrodite was derived mainly from that of the Phoenician goddess Astarte, who was acquired from the East Semitic goddess Ishtar of Sumeria. In Homer’s Iliad, along with Athena and Hera, Aphrodite, she was one of the three goddesses whose feud resulted in the Trojan War, and she plays a significant role throughout the Iliad. Aphrodite has been featured in western art as a symbol of female beauty and has appeared in numerous works of western literature.