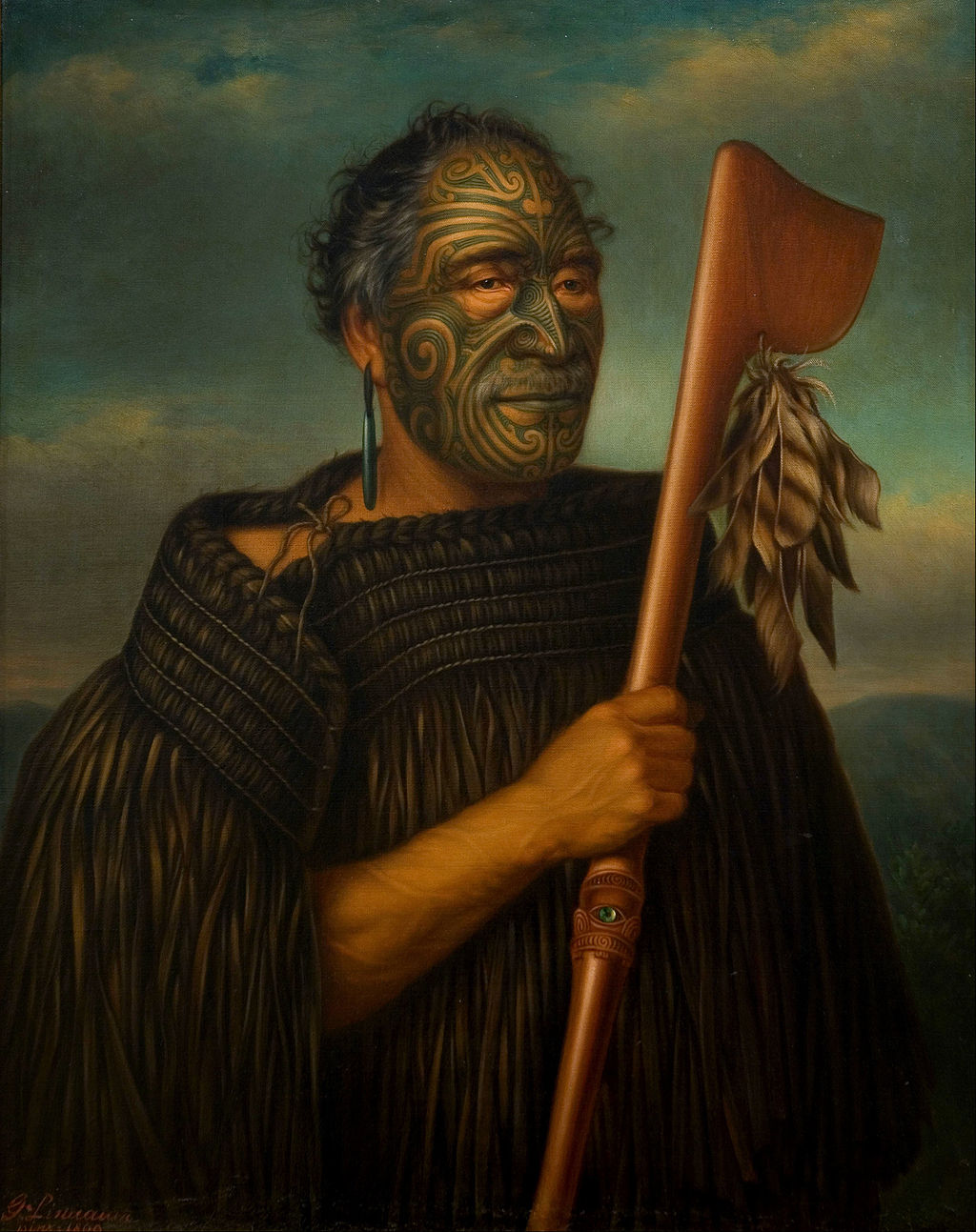 “Tamati Waka Nene” by Gottfried Lindauer depicts a prominent and courageous Maori chief of the Nga-ti-toa Tribe. Tamati Waka Nene (1780 – 1871) converted to the Wesleyan faith in 1839 and took the name  Tamati Waka, after Thomas Walker, an English merchant and patron of the Church Missionary Society.

Tamati Waka Nene is recognized as a prime agent in effecting Maori support for the Treaty of Waitangi. When the British assembled the Maori chiefs at Waitangi, to obtain their support for the Treaty of Waitangi, the British proposals were initially rejected by the chiefs, until Nene and his supporters made their move of support. Nene, by his diplomacy, eloquence, and wise words, turned the sentiment of the assembled chiefs towards supporting the treaty.

The Treaty of Waitangi was first signed in 1840 by representatives of the British Crown and various Māori chiefs from the North Island of New Zealand. It resulted in the declaration of British sovereignty over New Zealand. The Treaty recognized Māori ownership of their lands, forests, and other properties and gave the Māori the rights of British subjects. Unfortunately, the English and Māori versions of the Treaty differed, and there is disagreement about precisely what was agreed upon. From the British point of view, the Treaty gave Britain sovereignty over New Zealand and gave the Governor the right to govern the country. The Māori believed they ceded to the British the power of governance in return for protection, without giving up their authority to manage their affairs.

In pre-European Māori culture, most high-ranking people received moko, the permanent body, and face markings. Receiving moko was an essential milestone into adulthood, and was accompanied by many rites and rituals. Apart from signaling status and rank, another reason for the practice in traditional times was to make a person more attractive to the opposite sex. Men generally received moko on their faces, buttocks, and thighs. Women usually wore moko on their lips and chins.

The artist, Gottfried Lindauer, (1839 – 1926) was a Bohemian artist who migrated to New Zealand and became famous for his portraits, including many of Māori people. He left his homeland in 1874 to avoid being drafted to the Austrian military service. In New Zealand, many prominent Māori chiefs commissioned his work, which accurately records their tattoos, clothing, ornaments, and weapons.

A Tour of the Auckland Art Gallery Toi o Tāmaki

“Seek the treasure you value most dearly: if you bow your head, let it be to a lofty mountain.”
– Maori Proverb