These four Antarctic Sledges are icy and snow land vehicles with a smooth underside, relatively narrow, longitudinal runners that travel by sliding across cold snow surface. They have been used to transport passengers and or cargo in the Antarctic. Antarctica is Earth’s southernmost continent and contains the geographic South Pole. It is the fifth-largest continent, and nearly twice the size of Australia and about 98% of Antarctica is covered by ice.

The bottom Sledge dates to the 1950s of Canadian origin. This sled is an example of a modern man-hauling sled that was used in the Antarctic during the International Geophysical Year research programs during 1956 – 58 for short trips in the field. It is a development from the shortened dog sleds of the Scott-Shackleton ear.

The second from the bottom is a Half-Sledge, which dates to 1901-04 and is one of the half-sleds recovered from Discovery Hut, Ross Island, McMurdo Sound, Antarctica. This sled is the result of a partially damaged, full-length sled being sawn in half. It was used to carry lighter loads during scientific reconnaissance close to base camps. 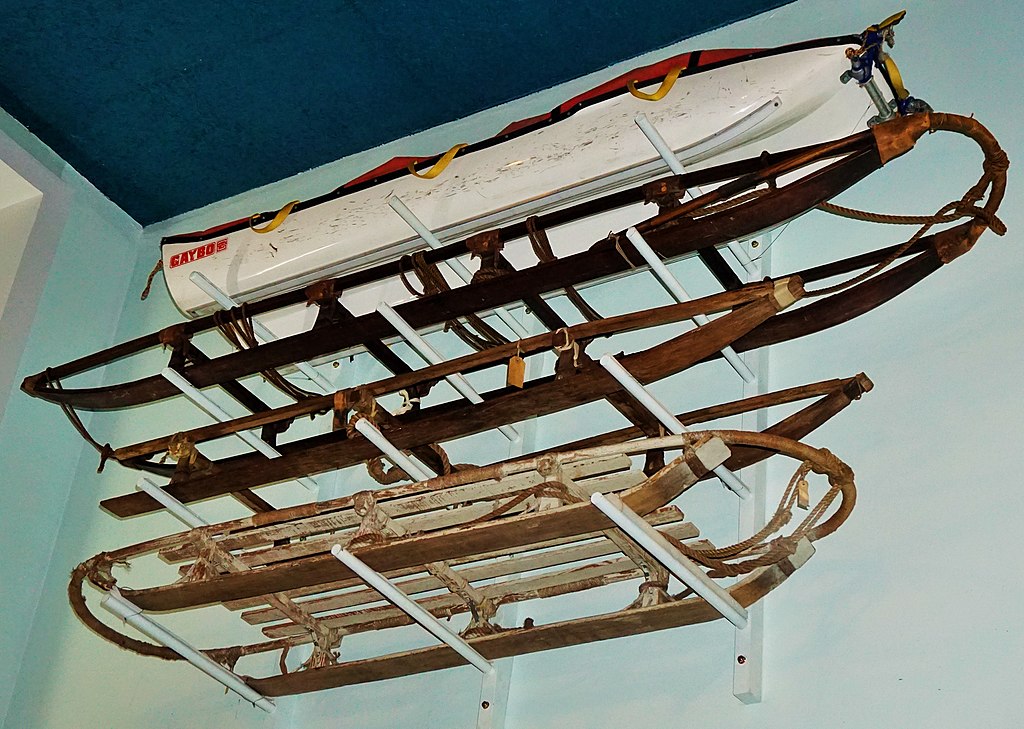 The second from the top Sledge dates to 1910 was part of Captain Scott’s 1910-13 British Antarctic Expedition. Captain Robert Falcon Scott (1868 – 1912) was a British Royal Navy officer and explorer who led two expeditions to the Antarctic regions. On the second venture, Scott led a party of five which reached the South Pole on 17 January 1912, four weeks after Roald Amundsen’s Norwegian expedition became the first to reach the South Pole. A planned meeting with supporting dog teams from the base camp failed, and at a distance of 150 miles from their base camp and 11 miles from the next depot, Scott and his companions perished.

The top Sledge dates to 1985 and is a fiberglass sled of modern design used by Robert Swan for man-hauling transport during his journey to the South Pole in 1985-86. Robert Charles Swan (born 1956) is the first person to walk to both Poles. During his Antarctic mission, Swan’s team had achieved the longest unassisted Antarctic march ever made in history.