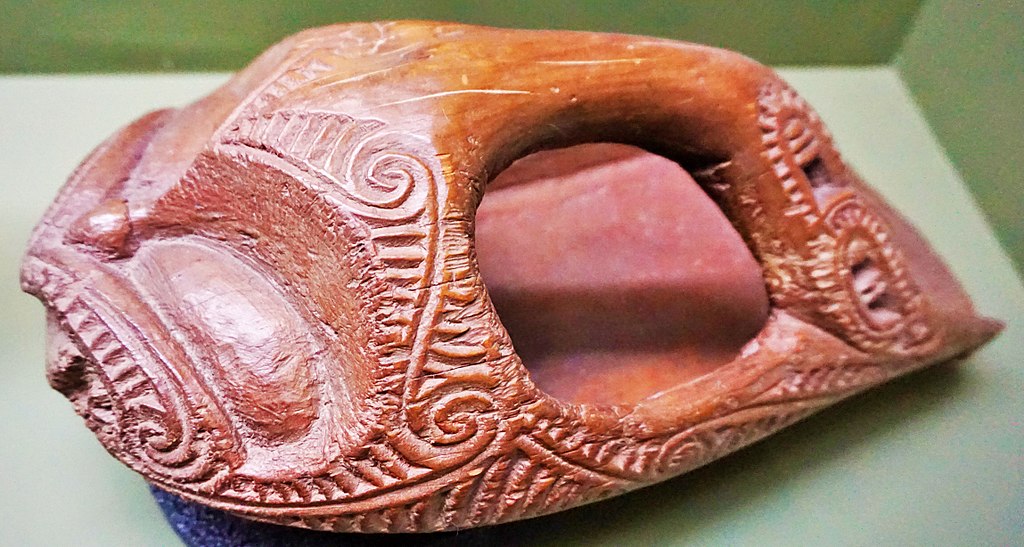 This Canoe Bailer (also called Tiheru) is made of totara wood and is carved with a human face on the body and a manaia figure on the handle. This totara wood tiheru is a water scoop for bailing out a canoe.

The Manaia figure on the handle is a mythological creature in Māori culture and is a common motif in Māori carving. The Manaia is usually depicted as having the head of a bird, the tail of a fish, and the body of a man. It is also sometimes depicted as a bird, a serpent, or a human figure in profile.

The Manaia is traditionally believed to be the messenger between the earthly world of mortals and the domain of the spirits. Its symbol is used as a guardian against evil.

This historical object was recovered during an archaeological investigation by Canterbury Museum in 1889 at Moncks Cave, Christchurch, which had been sealed in pre-European times and uncovered during roading operations. Significant artifacts were discovered when the cave was opened. The objects found include a wooden ama (outrigger canoe), a carved paddle, a canoe bailer, a wood carving of a dog, fragments of a fishing net, several greenstone axes, an amount of black hair and bones of fish and moa which were found in another cave inside the main one. The cave is considered to be one of the most significant archaeological findings in New Zealand