The Moa were giant flightless birds that lived in New Zealand up until about 500 years ago but are now extinct. These two Moa skeletons were found in the Canterbury region, and the larger one is the largest ever found. The Moa were the dominant herbivores in New Zealand’s forest and shrubland, for thousands of years. That is until the arrival of the Māori. Moa extinction occurred around 1300  – 1400, primarily due to overhunting by Māori.

The moa were nine species of flightless birds. The largest species, reached about 3.6 m (12 ft) in height with neck outstretched and weighed about 230 kg (510 lb). When Polynesians settled New Zealand around 1280 CE, the moa population was about 58,000. When Europeans first discovered moa skeletons in New Zealand in the 1830s, the Moa was declared a scientific mystery. 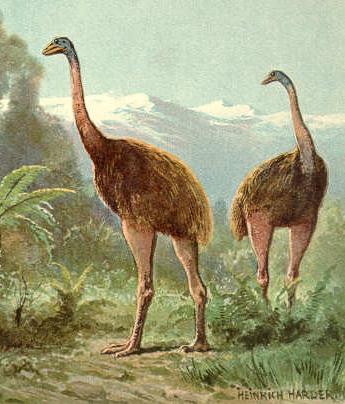 Illustration of Moa based on remains

The Moa has frequently been mentioned as potential candidates for revival by cloning. Having become extinct only a few hundred years ago, many Moa remains have survived. The Moa has been listed alongside such creatures as the Dodo as leading candidates for resurrection. Preliminary work involving the extraction of DNA has been undertaken, and interest in the Moa’s potential for revival has gained support from some natural history experts.