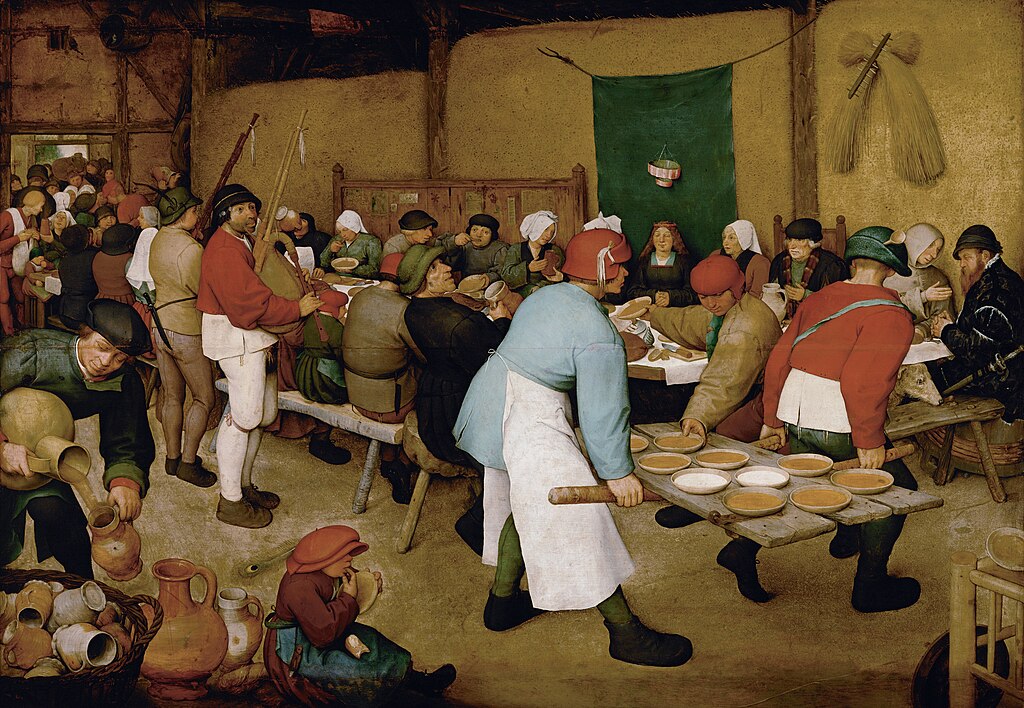 “The Peasant Wedding” by Pieter Bruegel the Elder depicts the bride in front of the green textile wall-hanging, with a paper-crown hung above her head. She is also wearing a crown on her head, but the Bridegroom is not identified, and his representation is uncertain.

There has been much conjecture as to the identity of the groom in this painting. He may be the man in the center of the painting, wearing a dark coat and seen in profile. Or is he against the far wall, to the right of the bride, eating with a spoon?

It has also been suggested that according to contemporary customs, the groom is not be seated at the table but serving the food or drink instead. According to another theory, the groom may not attend the wedding feast per Flemish custom.

The feast is in a barn with two sheaves of grain with a rake, symbolize the harvest and the peasant’s agricultural life.

The Dutch and Flemish Renaissance painter and printmaker Pieter Bruegel the Elder created many paintings depicting peasant life. He enjoyed painting peasants and different aspects of their lives in so many paintings that he has been called Peasant-Bruegel.

The scene depicts an accurate portrayal of the 16th-century celebration of a peasant wedding with the inclusion of many fascinating details:

‘”It is a poor man who is not able to be at his own wedding.”

A Virtual Tour of the Kunsthistorisches Museum

“It is not length of life, but depth of life.”
– Ralph Waldo Emerson