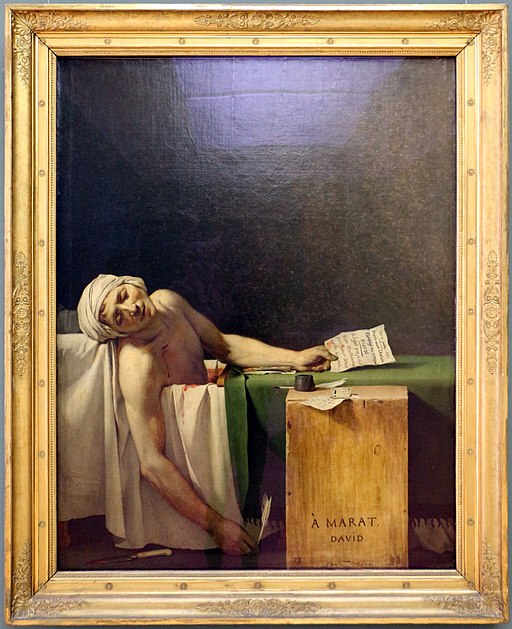 “The Death of Marat” by Jacques-Louis David

“The Death of Marat” by Jacques-Louis David depicts the murdered French revolutionary leader Jean-Paul Marat. David’s painting shows the radical journalist at the moment of his death in his bath.

Marat was one of the leaders of a key political group during the French Revolution, the radical faction which ascendant in French politics during the “Reign of Terror,” which it led.

Marat suffered from a skin condition that caused him to spend much of his time in his bathtub, where he would often complete his work.

Charlotte Corday, who murdered him, was from an opposing political fraction and a political enemy of Marat, who blamed him for the mass killings during the “September Massacre.

Painted in the months after Marat’s murder in 1793, David, who was a member of the Revolutionary Committee of General Security, created one of the most famous images of the French Revolution.

Marat’s image is idealized as he has no sign of his skin problems; his skin appears clear and flawless. David, however, included other details from his visit to Marat’s residence the day before the assassination, including the green rug, the papers, and the pen.

The name of “Charlotte Corday” can be seen on the paper held in Marat’s left hand; however, she is not in the frame. Marat is depicted during his last breath when Corday was still in the room.

Corday had fatally stabbed Marat, but she did not attempt to flee. David’s intent was not to record the horror but to associate his friend with sacred qualities.

David painted Marat as a martyr of the Revolution, in a style reminiscent of a Christian martyr, with the face and body bathed in the soft glowing light.

David was also drawing on classical parallels between the monumental events in France during his time and the historical Roman and Greek periods, that he had depicted in his other history paintings of Classical subjects and themes.

The idea of forming a kind of new Republic greater than the ones seen by Rome and Greece was appealed to French Revolutionaries.

“The Death of Marat” by Jacques-Louis David was widely admired during the Terror, whose leaders ordered several copies of the original work by David’s pupils to serve as propaganda.

After Robespierre’s overthrow and execution, David and others were prosecuted for their involvement in the Terror, and the painting lost its public appeal.  David would have to wait for Napoleon’s rise to become prominent in the arts once more.

This original painting by David is displayed at the Royal Museum of Fine Arts in Brussels, the city where Jacques-Louis David had lived and died in exile after the fall of Napoleon.

Some of the copies made by David’s pupils have survived and can be found in several other museums. 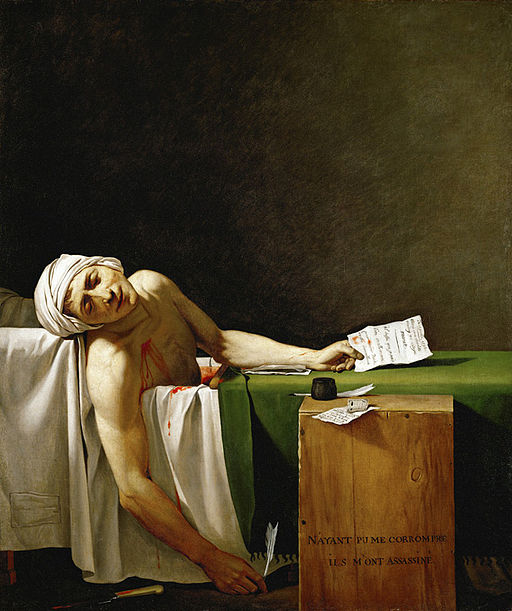 Marie-Anne Charlotte de Corday d’Armont (1768 – 1793) in 1793 was tried and executed by guillotine for the assassination of Jacobin leader Jean-Paul Marat, who was in part responsible for the more radical course the Revolution had taken through his role as a politician and journalist.

Marat had played a substantial role in the political purge of the Girondins, with whom Corday sympathized. In 1847,  a Frech writer and politician gave Corday the posthumous nickname “The Angel of Assassination.”

The Reign of Terror refers to a period during the French Revolution, which was characterized by a dramatic rejection of all long-held authority.

The rejection of its hierarchical structure, and the corrupt influence of the aristocracy and clergy.

Religious elements that had long stood as symbols of stability for the French people were replaced by reason and science.

One of the atrocities that motivated Charlotte Corday was the “September Massacres.”

This label was attached to a large number of killings in Paris and other cities that occurred in 1792 during the French Revolution during the Reign of Terror.

The massacres were not an outburst of passion, but coldly and carefully organized. More than 1,000 prisoners were killed within 20 hours. Jean-Paul Marat, a member of the “Comité de surveillance,” called this action.

The rest of Paris looked on in fear or approval.

Imprisoned after Robespierre’s fall from power, he aligned himself with yet another political regime upon his release, that of Napoleon. At this time, he developed his Empire style.

The Death of Marat, David

A Tour of the Royal Museums of Fine Arts of Belgium

The Death of Marat by Jacques-Louis David

“Peoples do not judge in the same way as courts of law; they do not hand down sentences, they throw thunderbolts; they do not condemn kings, they drop them back into the void, and this justice is worth just as much as that of the courts.”
– Maximilien Robespierre