The altarpiece, as one of the more coveted pieces of art history, has been the victim of 13 crimes since its installation, and seven thefts. Nearly 600 years old, the panels have been threatened by theft, war damage, peace settlements, outbreaks of iconoclasm, and has suffered fire damage.

The panels are organized in two vertical registers, each with double sets of foldable wings containing inner and outer panel paintings.

The upper register of the inner panels represent the heavenly redemption and include Christ the King or perhaps God the Father, the Virgin Mary, and John the Baptist.

They are flanked in the next set of panels by angels playing music on musical instruments and singing. On the far outermost panels, the figures of Adam and Eve.

The central panel of the lower register shows a gathering of saints, sinners, clergy and soldiers attendant at the adoration of the Lamb of God. There are several groupings of figures, overseen by the dove of the Holy Spirit.

The other two outer panels depict the donor portraits of Joost Vijdt and Lysbette Borluut. The altarpiece was commissioned by the merchant and Ghent mayor Jodocus Vijd and his wife, Lysbette. 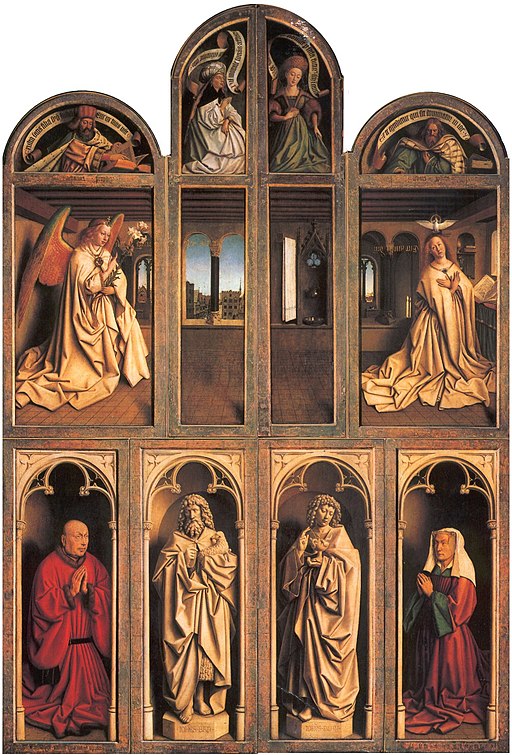 Hubert van Eyck designed the overall structure in the early to mid-1420s, and the panels were painted by his younger brother Jan van Eyck. There is no convincing information to determine artistic attribution. It may be that Jan finished panels begun by Hubert.

The altarpiece’s installation was celebrated in 1432. It was part of a larger project for the Saint Bavo Cathedral chapel, but it was later moved for security reasons to the main cathedral chapel, where it is today. The altarpiece is one of the most famous artworks in European Art History.

Jodocus Vijd was a wealthy merchant and came from a family that had been influential in Ghent for several generations. Around 1398 Jodocus married Lysbette Borluut, and they commissioned the monumental altarpiece which was intended to secure a legacy and to:

“secure their position in the hereafter.”

The altarpiece represented a significant advancement in western art. The idealization of traditional medieval art gives way to realistic representations of nature and humanity. The very ornate, carved outer frame with painted tracery, was destroyed during the Reformation.

Closed View of the Ghent Altarpiece

When the shutters are closed, the closed view has three stacked panels. The upper panels contain lunettes showing prophets and Sibyls looking down on the annunciation. The figures in the lunettes refer to prophecies of the coming of Christ.

The central panels depict the Archangel Gabriel announcing to Mary that she would conceive and become the mother of Jesus.

The bottom tier shows the donors on the far left and right panels with saints in the center.

The exterior panels are executed with relative sparseness in comparison to the color and abundance of detail in the interior scenes. Their settings are earthly and relatively simple.

The painting of the saints in the bottom panels imitate sculpture, and the lighting is used to significant effect to create the impression of depth. The depiction of shadow makes the viewer feel as if the pictorial space is lit by light entering the chapel.

History of the Ghent Altarpiece

After the French Revolution, the altarpiece was among several artworks plundered and taken to Paris, where they were exhibited at the Louvre. It was later returned to Ghent in 1815 after the French defeat at the Battle of Waterloo.

The painting’s wings were pawned in 1815 by the Diocese of Ghent for the equivalent of £240. When the diocese failed to redeem them, they were sold by the dealer in 1816.

During World War I, several panels were taken from the cathedral by Germany. As part of the mandated compensation in the Versailles Treaty after the end of the war, Germany was forced to return the stolen panels. In addition, the original panels that had been legitimately purchased had to be returned to help compensate for other German “acts of destruction” during the war.

At the start of World War II, the decision was made by the Belgium Government to send the Ghent Altarpiece to the Vatican for its safety. The picture group was en route to the Vatican, in France, when Italy declared war as an Axis power alongside Germany. The painting was then stored temporarily in a museum in Pau, France.

In 1942, Adolf Hitler ordered the painting to be seized and brought to Germany to be stored in a Bavarian castle. After Allied air raids made the castle too dangerous for the art, it was stored deep in a salt mine.

The altarpiece was recovered by the Allied group “Monuments, Fine Arts, and Archives program” and returned to Belgium. In 1945, the altarpiece was returned from Germany after spending much of World War II hidden in a salt mine, which damaged the paint and varnish.

A Belgian art restorer produced a copy of the missing ‘The Just Judges,’ as part of an overall restoration effort.

The cathedral is noted for the Ghent Altarpiece, which is one of the greatest artistic masterpieces of Belgium.

The cathedral is home to works of other famous artists, including:

He was employed as a painter to the ruler of Holland. Later as a court painter to the Duke of Burgundy until he moved to Bruges in 1429, where he lived until his death.