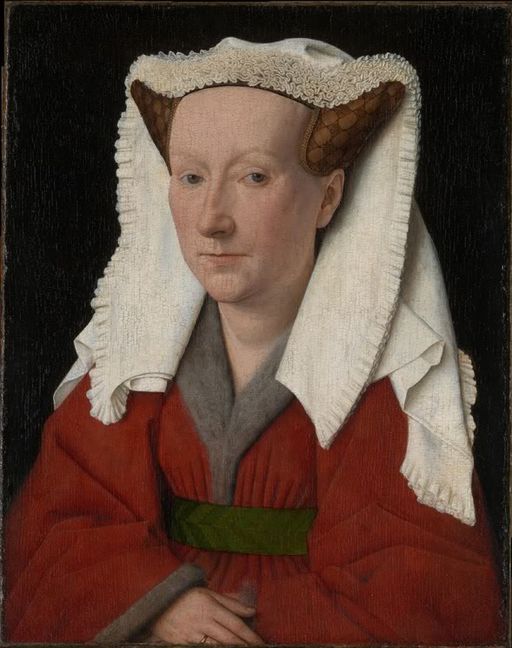 “Portrait of Margaret van Eyck” by Jan van Eyck depicts the artist’s wife and is one of the earliest European artworks to represent a painter’s spouse.

The sitter’s unidealized representation and her direct gaze create an intimate and informal atmosphere. Her left eye shows evidence of a squint. This natural portrayal suggests that the painting was created to mark an occasion and for private rather than public viewing.

Painted in 1439 using oil on wood, it shows Margaret when she was around 33 years of age. It is thought to be a pendant panel to Jan van Eyck’s likely self-portrait now in the National Gallery in London.

Van Eyck died within two years of this work. He inscribed plates on the top and ends of the frame in Greek lettering with the words:

It was signed “As I can” (ALS ICH KAN), which was was Jan van Eyck’s personal motto, in Greek characters, and his motif. His signature text was as a pun on his surname. It can be found inscribed on several of his religious paintings, though it is only two portraits.

Margaret van Eyck is set against a flat black and featureless background.  She is wearing an elegant red woolen gown with grey fur lining in the neck and cuffs. In the medieval period, fur represented female sexuality. The fur was probably from a squirrel.

Her hair is done up fashionably in two small horns that are held together by hairnets in chequered motifs. Her horned wimple is decorated with delicate lace.

Her red over garment is bound up high with a broad belt. Her hands are placed on top of each other. On the right hand, she is wearing a ring.

The painter has accentuated some features in the portrait. Her head is out of proportion to her body, and her forehead unusually and fashionably high. The picture stands out because of the difference in scale between the body and head.

Margareta is near a window that is mirrored in her eyes, and she turns and looks at the viewer. The geometric pattern formed by her head-dress, arms, and the V of her neck-line also allowed her face to dominate the image. These devices allowed Van Eyck to concentrate on facial features.

Margaret married Jan around 1433, soon after Jan van Eyck moved to Bruges.  The first of their two children was born a year later. Very little is known of Margaret, even her maiden name is lost.

She is thought to have been of aristocratic birth, though from the lower nobility, evidenced from her clothes in this portrait, which was fashionable but not of the sumptuousness worn by the bride in van Eyck’s Arnolfini Portrait. Their social position regulated the fabrics and colors worn by people of the 15th century.

Jan, her husband died eight years into their marriage, but as the widow of a renowned painter, Margaret was afforded a modest pension by the city of Bruges after Jan’s death.

A wimple is a medieval form of female head-dress, formed of a large piece of cloth worn around the neck and chin, and covering the top of the head. During many stages of medieval Christian culture, it was improper for a married woman to show her hair.

A wimple might be elaborately starched and creased and folded in prescribed ways. Later, more elaborate versions were supported on wire or wicker framing, such as the cornette.

Italian women abandoned their head cloths in the 15th century, or replaced them with a transparent veil, and showed their elaborate braids.

Today the wimple is worn by certain nuns who retain a traditional habit.

Jan van Eyck (1390 – 1441) was a Flemish painter who was one of the founders of Early Netherlandish painting. He was employed as a painter to John III, the Pitiless, ruler of Holland.

Later he became as court painter to Philip the Good, Duke of Burgundy until he moved to Bruges in 1429, where he lived until his death. He was highly regarded by the Duke of Burgundy and undertook several diplomatic visits abroad.

About 20 surviving paintings are attributed to him, as well as the Ghent Altarpiece and the illuminated miniatures of the Turin-Milan Hours. Van Eyck painted both secular and religious subject matter, including altarpieces, single panel religious figures, and commissioned portraits.

Van Eyck’s work comes from the International Gothic style, but he soon eclipsed it, in part through a greater emphasis on naturalism and realism. He achieved a new level of virtuosity through his developments in the use of oil paint. He was highly influential, and his techniques and style were adopted and refined by the Early Netherlandish painters.

Bruges is the capital and largest city of the province of West Flanders in the Flemish Region of Belgium, in the northwest of the country. Bruges became rich because of its tidal inlet that was important to local commerce. In 1089 Bruges became the capital of the County of Flanders.

In the 15th century, Philip the Good, Duke of Burgundy, set up court in Bruges, as well as Brussels and Lille, attracting several artists, like Jan van Eyck, and other prominent personalities from all over Europe.

The weavers and spinners of Bruges were thought to be the best in the world, and the population of Bruges grew to 200,000 inhabitants at around 1400 AD.

Starting around 1500, the Zwin channel, which had given the city its prosperity, started silting, and the Golden Era ended. The city soon fell behind Antwerp as the economic flagship of the Low Countries.

As Antwerp became increasingly dominant, Bruges became impoverished and gradually faded in importance. Its population dwindled to 50,000 by 1900.