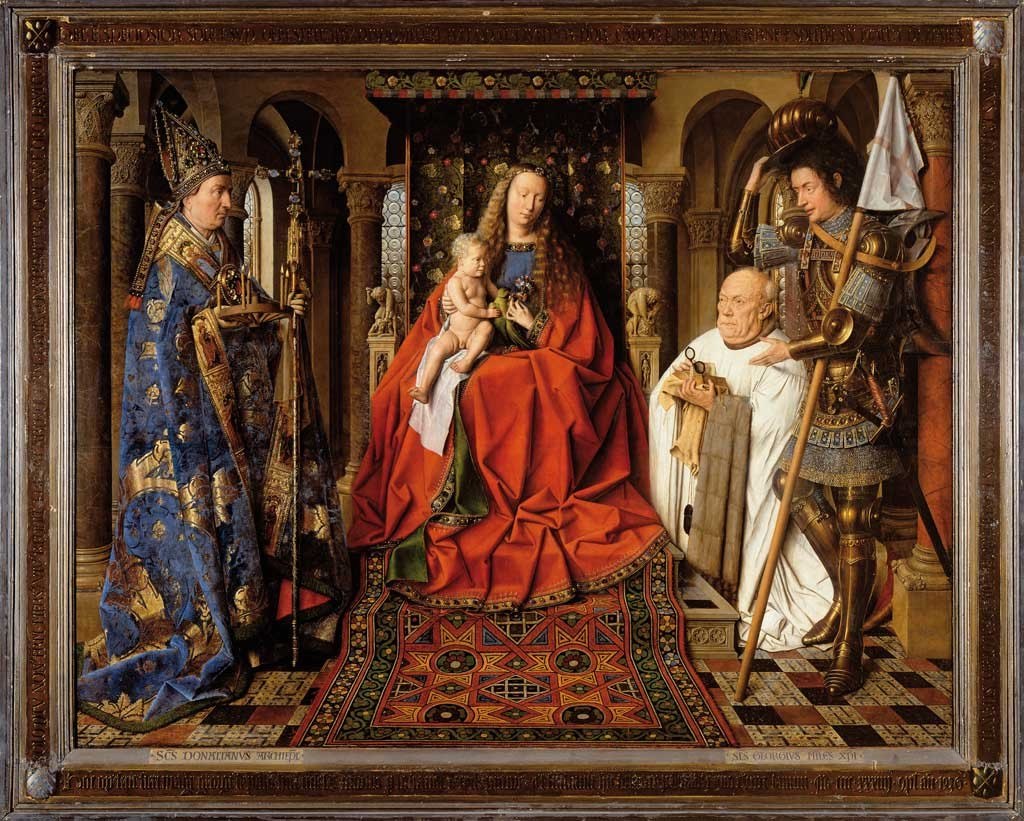 “Virgin and Child with Canon van der Paele” by Jan van Eyck depicts the Virgin Mary enthroned at the center of the semicircular space, with the Christ Child on her lap.

The Virgin and Child are set in a rounded church with side ambulatories. Mary is occupying the area where the altarpiece would usually be positioned. Mary offers the child Jesus a bouquet while he plays with a Rose-ringed Parakeet.

St. Donatian stands to her right, dressed in elaborately colorful blue and gold vestments and miter holding his accouterments. Saint George, stands to her left dressed as a military knight in spectacular armor.

The painting’s donor, Joris van der Paele, is kneeing dressed in white. He is dressed in the finery of a medieval canon, including white surplice, as he piously reads from a book of hours.

Van der Paele is being presented to Mary by Saint George, his name saint, who holds his metal helmet aloft with respect.

Carving on the capital to Mary’s left: Cain beats Abel to death with a club

Van der Paele, who commissioned the panel as an altarpiece, was a wealthy clergyman from Bruges. He was elderly and gravely ill, and he intended the work to be his memorial.

This large oil-on-oak panel painting was completed around 1434–36. It is famous for the finery of clothing, including exquisite representations of furs, silks, and brocades, and the elaborate and highly detailed religious iconography.

The Virgin’s throne is decorated with carvings of representations from the Bible. The painting’s frame is lined with a series of Latin inscriptions which comment on the saints, and include van Eyck’s signature. 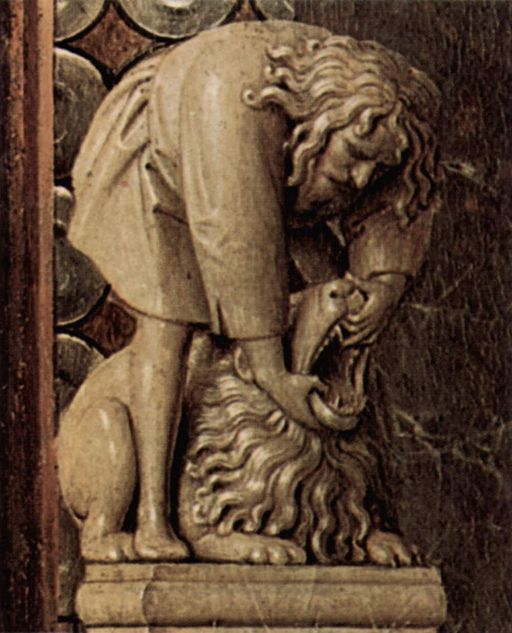 The capital to Mary’s right: Samson opening the Lion’s jaws

The van der Paele panel is widely considered one of van Eyck’s most fully realized and ambitious works, and has been described as a “masterpiece of masterpieces.”

Sculptures on the Throne

The reliefs and sculptures, on the Virgin’s throne and the capitals in the background, alluding to the salvation of humanity include:

The depiction of the capitals includes Abraham sacrificing Isaac. The Old Testament framework provides reflect on the mercy of God, who sent his Son, Christ the Redeemer, into the world.

The grace of God, symbolized by “Abraham sacrificing Isaac,” serves as proof of the redeeming power and presence of God. 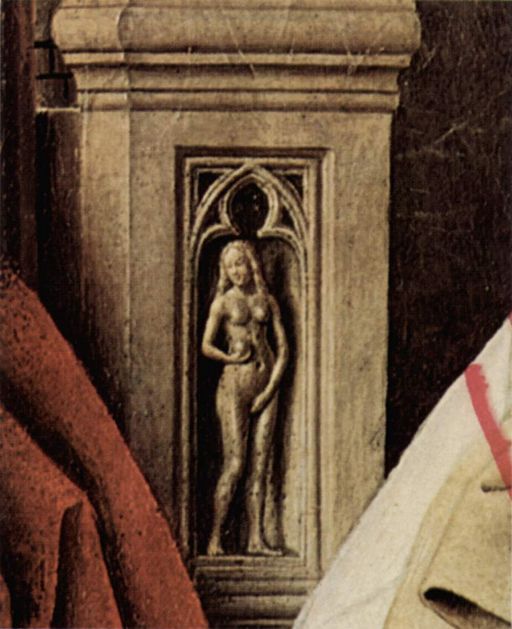 Imitation carving of Eve on the arm of the throne

Survival of a Masterpiece

The painting remained in the church until after the French Revolution and was one of the artistic attractions for visitors to Bruges.

The painting was acquired, along with many other Netherlandish and Flemish works, by the Musée du Louvre in 1794, during the plundering of the estates of aristocrats in the years of the French revolutionary army’s occupation of the Southern Netherlands.

The van der Paele panel was later returned to Bruges in 1816. The panel then became entangled in a dispute over ownership between the French and Dutch-speaking officials of Bruges, but it was entrusted to the Flemish Academy of Bruges.

Donatien of Reims was a 4th-century French saint and a Bishop of Reims who died in 389 AD.

His relics were transferred n AD 863 to the Church Saint-Agricol de Reims at Bruges, where his cult is still active.

A legend has it that he was thrown as a child into a river, where a holy man took five candles and placed them on a water wheel, which showed where the child had gone, and he was able to recover the child.

Joris van der Paele (1370–1443) was a scribe in the papal chancery. He had a successful ecclesiastical career and was a patron of the painter Jan van Eyck. He was born near Bruges to a family with considerable clerical connections.

In 1394, during the Western Schism, he was deprived of his prebend due to his loyalty to Pope Boniface IX in Rome. The city of Bruges recognizing Avignon as the seat of the papacy.

In 1410 he was reappointed to a canonry of the church of St Donatian in Bruges. In July 1418, he began a process of retirement. 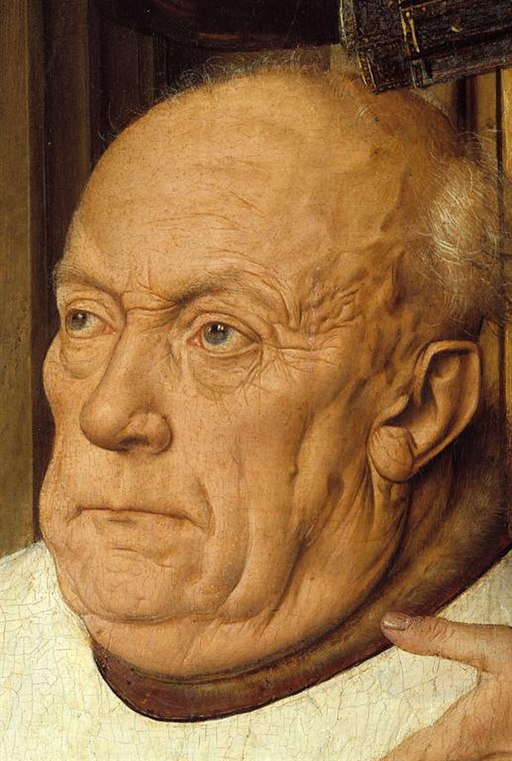 Canon van der Paele who commissioned this painting as his legacy

In 1432 Van der Paele’s health declined markedly. From 1434 he began to work on his legacy to the church, founding a chapel and commissioning this painting from Jan van Eyck.

Van der Paele died in Bruges in 1443 and was buried in the chapel he had founded in the church of St Donatian.

Jan van Eyck (1390 – 1441) was a Flemish painter who was one of the founders of Early Netherlandish painting. He was employed as a painter to John III, the Pitiless, ruler of Holland.

Later he became as court painter to Philip the Good, Duke of Burgundy until he moved to Bruges in 1429, where he lived until his death. He was highly regarded by the Duke of Burgundy and undertook several diplomatic visits abroad.

About 20 surviving paintings are attributed to him, as well as the Ghent Altarpiece and the illuminated miniatures of the Turin-Milan Hours. Van Eyck painted both secular and religious subject matter, including altarpieces, single panel religious figures, and commissioned portraits.

Van Eyck’s work comes from the International Gothic style, but he soon eclipsed it, in part through a greater emphasis on naturalism and realism. He achieved a new level of virtuosity through his developments in the use of oil paint. He was highly influential, and his techniques and style were adopted and refined by the Early Netherlandish painters.

Bruges is the capital and largest city of the province of West Flanders in the Flemish Region of Belgium, in the northwest of the country. Bruges became rich because of its tidal inlet that was important to local commerce. In 1089 Bruges became the capital of the County of Flanders.

In the 15th century, Philip the Good, Duke of Burgundy, set up court in Bruges, as well as Brussels and Lille, attracting several artists, like Jan van Eyck, and other prominent personalities from all over Europe.

The weavers and spinners of Bruges were thought to be the best in the world, and the population of Bruges grew to 200,000 inhabitants at around 1400 AD.

Starting around 1500, the Zwin channel, which had given the city its prosperity, started silting, and the Golden Era ended. The city soon fell behind Antwerp as the economic flagship of the Low Countries.

As Antwerp became increasingly dominant, Bruges became impoverished and gradually faded in importance. Its population dwindled to 50,000 by 1900.