The most notable tomb at Les Invalides is the Tomb of Napoleon Bonaparte. Napoleon was initially interred on Saint Helena, but King Louis Philippe arranged for his remains to be brought to France in 1840, an event known as the “return of the ashes.”

His “ashes” mean his “mortal remains,” as Napoleon was not cremated. Napoléon’s remains were first buried in the Chapelle Saint-Jérôme in the Invalides.

His final resting place, a tomb made of red quartzite and resting on a green granite base, was finished in 1861.

After Napoleon’s defeat in the “War of the Sixth Coalition” in 1814,  he abdicated as emperor of the French and was exiled to the Mediterranean island of Elba.

The following year he escaped and returned to France, and took control of France, and began his “Hundred Days” period or rule.

The allied powers which had prevailed against him the previous year mobilized against him and defeated the French in the “Battle of Waterloo.”

Napoleon returned to Paris and abdicated again in 1815. Foiled in his attempt to sail to the United States, he gave himself up to the British, who exiled him to the remote island of St Helena in the south Atlantic Ocean. He died and was buried there in 1821.

Today, Napoleon’s remains repose in a magnificent monument beneath the middle of the dome in the Invalides.

A circular hollow was cut beneath the dome as an open crypt. In the open crypt was placed a large sarcophagus. The red sarcophagus rests upon a base of green granite.

That green granite block rests, in turn, upon a slab of black marble. In 1861, Napoleon’s coffin was transferred from the chapel of Saint-Jérôme, where it had lain since 1840.

Members of Napoleon’s family, military officers who served under him, and other military heroes are also buried at Les Invalides and located around Napoléon’s tomb. 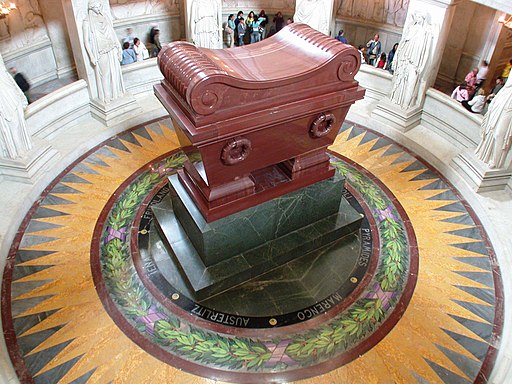 He was Emperor of the French as Napoleon I from 1804 until 1814 and again briefly in 1815 during the Hundred Days. Napoleon dominated European and global affairs for more than a decade while leading France against a series of coalitions in the Napoleonic Wars.

Napoléon won most of the wars and the vast majority of his battles he commanded. He managed to build a vast empire that ruled over much of continental Europe before its final collapse in 1815.

He is considered one of the greatest commanders in history. Napoleon’s political and cultural legacy has endured as one of the most influential leaders in human history.

“Never interrupt your enemy when he is making a mistake.”

“The truest wisdom is a resolute determination.”

“If you want a thing done well, do it yourself.”

“Until you spread your wings, you’ll have no idea how far you can fly.”

“Courage isn’t having the strength to go on – it is going on when you don’t have strength.”

“Religion is what keeps the poor from murdering the rich.”

“A leader is a dealer in hope.”

“Victory is not always winning the battle…but rising every time you fall.”

“History is a set of lies agreed upon.”

“Ability is nothing without opportunity.”

“You don’t reason with intellectuals. You shoot them.”

“Victory belongs to the most persevering.”

“The purpose of religion is to keep the poor from killing the rich.”

“The stupid speak of the past, the wise of the present, and fools of the future.”

“Envy is a declaration of inferiority.”

“Glory is fleeting, but obscurity is forever.”

“Impossible is a word to be found only in the dictionary of fools.”

“History is a set of lies agreed upon.”
– Napoleon Bonaparte