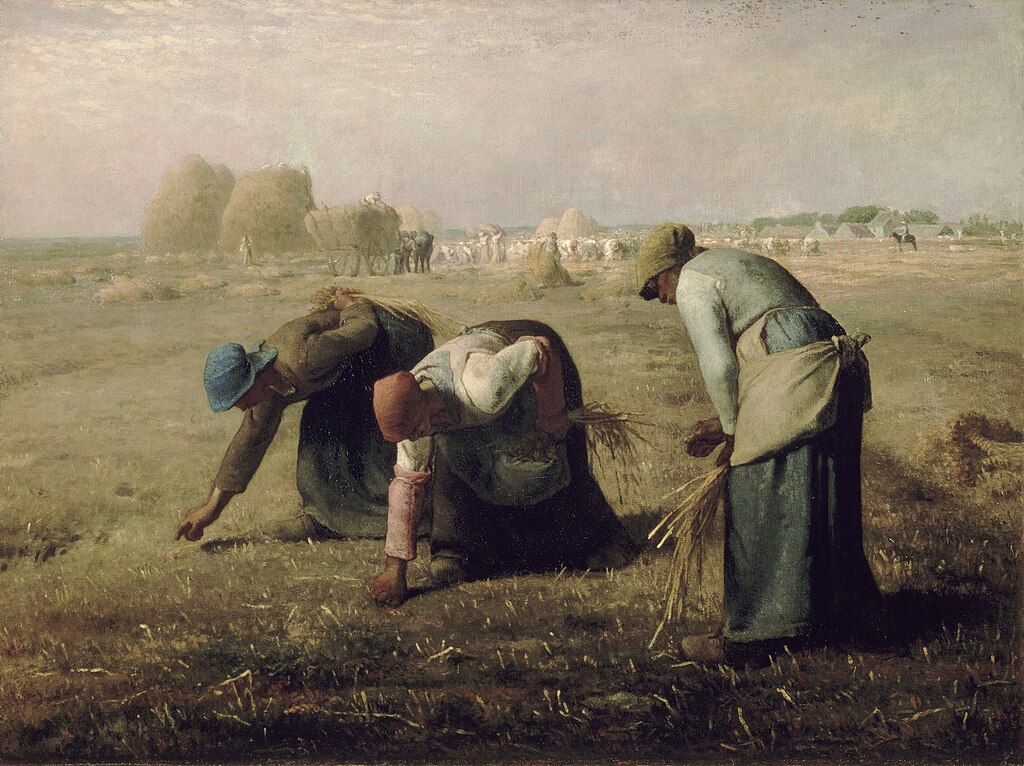 The Gleaners by Jean-François Millet

The Gleaners by Jean-François Millet depicts three peasant women gleaning a field of stray stalks of wheat after the harvest. The painting is famous for featuring the lowest ranks of rural society sympathetically.

However, it immediately drew negative criticism from the middle and upper classes.

Paris had recently come through the French Revolution of 1848, and the privileged classes saw this painting as glorifying the lower-class worker.

To them, it was a reminder that French society was built upon the labor of the working masses. The masses of workers greatly outnumbered the members of the upper class.

This disparity in numbers meant that if the lower class were to revolt, the higher class would be overturned.

Millet’s work broke the norms by not depict anything religiously affiliated, nor was there any reference to any mythological beliefs.

The painting illustrated a realistic view of poverty and the working class. There is no sense of community and compassion in the contrasting grinding poverty in the foreground and the abundant harvest in the sunlit distance beyond.

The implicit irony was unsettling. The landowners linked the working class with the growing movement of Socialism.

The Gleaners received little but notoriety during Millet’s life, but after his death, public appreciation of his work steadily broadened.

Today, it is one of Millet’s best-known works. Its imagery of bending peasant women echoed in works by younger artists such as Pissarro, Renoir, Seurat, and van Gogh.

This painting demonstrates Millet’s sympathy for the plight of the weakest members of the community around Barbizon as the area experienced the growing pains of modernization.

Barbizon was only thirty-five miles from the French capital, and Millet’s representation of class strife on a large-scale farm was uniquely modern in the 1850s.

The 1848 Revolution in France, sometimes known as the February Revolution, was one of a wave of revolutions in 1848 in Europe.

In France, the revolutionary events led to the creation of the French Second Republic.

The February revolution also established the principle of the “right to work,” and its newly established government created “National Workshops” for the unemployed.

Jean-François Millet (1814 –1875) was one of the founders of the Barbizon painting school in rural France. Millet was part of the Realism art movement and is noted for his scenes of peasant farmers.

Millet was an important source of inspiration for Vincent van Gogh. Millet and his work are mentioned many times in Vincent’s letters to his brother Theo.

Millet’s later landscapes served to influence  Claude Monet’s paintings of the coast of Normandy.  Salvador Dalí was fascinated by Millet’s work and wrote an analysis of his works.

The Gleaners by Jean-Francois Millet

“It is the treating of the commonplace with the feeling of the sublime that gives to art its true power.”
– Jean-Francois Millet