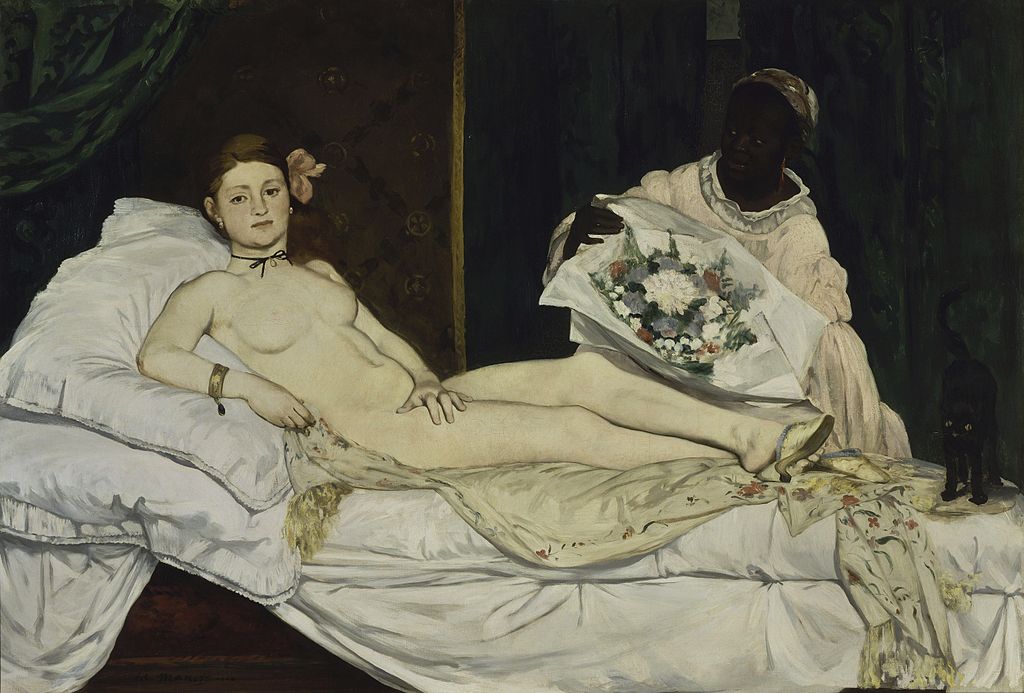 “Olympia” by Édouard Manet shows a nude woman lying on a bed being brought flowers by a servant. Olympia’s confrontational gaze caused astonishment when the painting was first exhibited because the details in the picture identified her as a prostitute.

“Olympia” was also a name associated with prostitutes in the 1860’s Paris. Most paintings during this period of art that were this large in size and formate were for historical or mythological art, so the significant proportions of this picture on this topic was a surprise to the establishment.

Olympia is identified in the painting as a courtesan or prostitute. The identification is made with the symbols of the orchid in her hair, her bracelet, the pearl earrings, and her oriental shawl.

The black ribbon around her neck is in stark contrast with her pale skin, reinforcing wealth, and sensuality.

This painting was inspired by Titian’s “Venus of Urbino” from 1538, which in turn refers to Giorgione’s “Sleeping Venus” from 1510.

There were also pictorial precedents for a nude woman, attended by a black servant, by Ingres and other historical painters.

This painting was different and groundbreaking as Manet did not depict a goddess or an odalisque but a high-class prostitute waiting for a client.

Édouard Manet (1832 – 1883) was one of the first 19th-century artists to paint modern life and was a pivotal figure in the transition from Realism to Impressionism.

His early masterpieces caused much controversy and served as an influence for the young painters who would create Impressionism.

In the last two decades of Manet’s life, he developed a style that had a significant impact on future painters.

“One who fears to suffer,
suffers from fear.”
– French Proverb