“The Church at Auvers” by Vincent van Gogh

“The Church at Auvers” by Vincent van Gogh depicts the church in Auvers-Sur-Oise, a village in the outskirts of Paris. It was built in the 13th century in the early Gothic style and is flanked by two Romanesque chapels.

Van Gogh had been dismissed from the evangelical career he had hoped for more than ten years earlier while he was living in Belgium. Vincent van Gogh had written to his brother, at that time, when he was staring his artistic career, of the dark emptiness inside a church that symbolized:

Van Gogh described this painting in a letter to his sister Wilhelmina on 5 June 1890:

“I have a larger picture of the village church — an effect in which the building appears to be violet-hued against a sky of simple deep blue color, pure cobalt; the stained-glass windows appear as ultramarine blotches, the roof is violet and partly orange. In the foreground, some green plants in bloom, and sand with the pink flow of sunshine in it. And once again, it is nearly the same thing as the studies I did in Nuenen of the old tower and the cemetery, only it is probably that now the color is more expressive, more sumptuous.”

The foreground is brightly lit by the sun, but the church itself sits in its own shadow. The motif of diverging paths also appears in his painting “Wheat Field with Crows.” 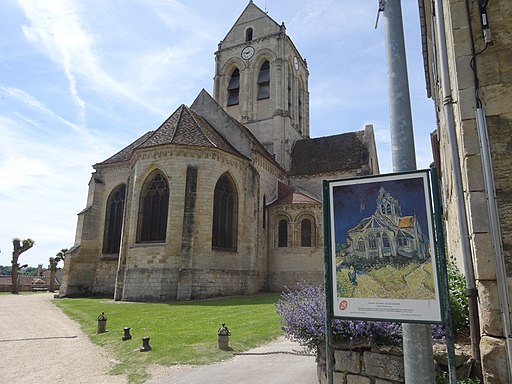 Church of Our Lady of the Assumption of Auvers -Sur- Oise

In May 1890, Van Gogh left the psychiatric hospital in Saint-Rémy to move nearer to both Dr. Paul Gachet in Auvers-Sur-Oise and his brother Theo in Paris.

His brother Théo, who was concerned about Vincent’s health, had strongly recommended that he see Doctor Gachet, himself a painter and a friend of numerous artists.

During the two months from his arrival, in May 1890, to his death on July 29, Van Gogh made about seventy paintings and a large number of drawings.

This painting is the only painting showing the full church as the main subject. The church can be seen in the distant background of some of the views of the village in some other of Van Gogh’s paintings.

Van Gogh died in the early hours of 29 July 1890. He was buried the next day in the municipal cemetery of Auvers-Sur-Oise.

Theo died at the age of 33, six months after his brother died. Their two graves and two gravestones are side by side in the cemetery of Auvers-Sur-Oise. 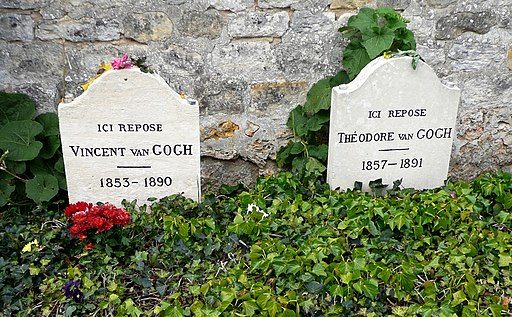 The Church in Auvers-sur-Oise, view from the Chevet

THANK YOU to our Sponsor:

Become a Sponsor at: SPONSOR “Joy of Museums”

The Church at Auvers Discovery

The Church at Auvers – Drone painting