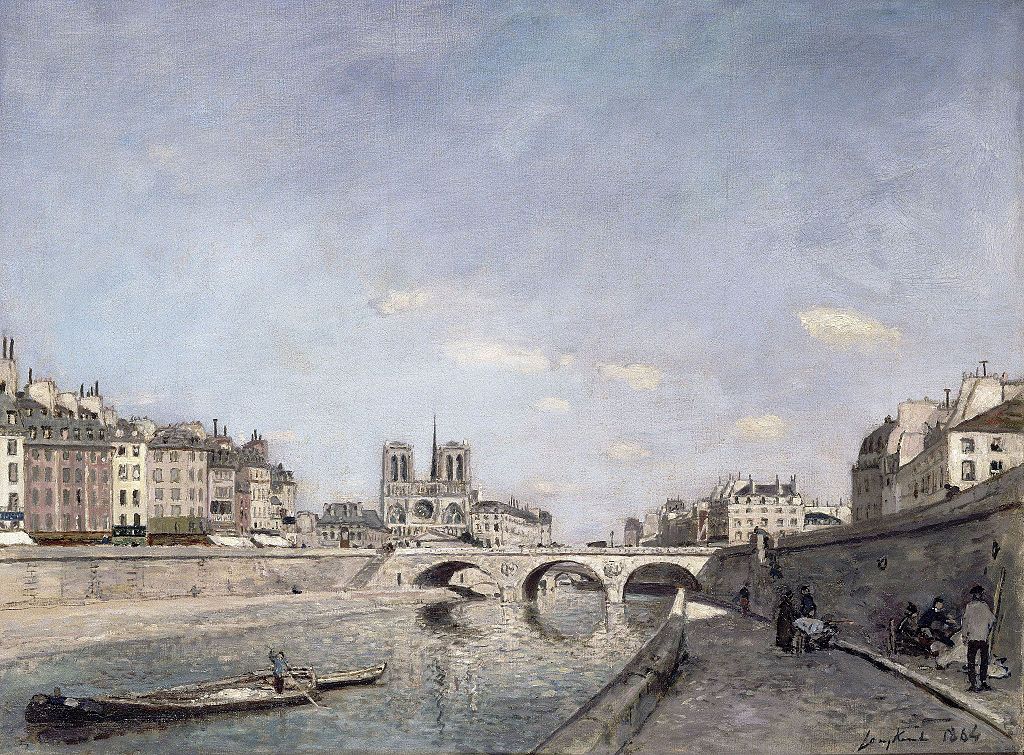 “The Seine and Notre-Dame in Paris” by Johan Jongkind

In the 1860s, Jongkind met the young Claude Monet in Normandy and who was fascinated by Jongkind’s ability to catch fleeting variations in the weather in his watercolors. Monet later said of Jongkind:

“He was the one who really trained my eye…”

Jongkind did not exhibit with the Impressionists, but he is today regarded as one of their precursors. Several elements in this painting suggest this relationship, such as the vibrant reflections of the water and the fragmented brushstrokes.

Jongkind is considered as being positioned between Corot and Monet in the developments towards Impressionists art.

Johan Barthold Jongkind (1819 – 1891) was a Dutch painter who painted marine landscapes in a free manner and is regarded as a forerunner of Impressionism.

His most frequent subject was the maritime landscape, and many of his works depict the Seine, particularly the area near Notre-Dame Cathedral.

He painted watercolors out-of-doors and used them as sketches for oil paintings made in his studio. Energetic brushwork and sharp contrasts characterize his paintings.

Like the 17th-century Dutch landscape painters, he typically composed his landscapes with a low horizon, allowing the sky to dominate.

Notre-Dame de Paris means “Our Lady of Paris” and is also known as Notre-Dame Cathedral or simply Notre-Dame. It is a medieval Catholic cathedral on the Île de la Cité in Paris, France.

The cathedral is one of the finest examples of French Gothic architecture.

In the 1790s, Notre-Dame suffered desecration during the French Revolution when much of its religious imagery was damaged or destroyed. A

The Seine and Notre-Dame in Paris

The History of Notre Dame – What’s At Stake

Paris: The Great Saga – How Notre Dame was built

“Whoever does not visit Paris regularly will never really be elegant.”
– Honoré de Balzac