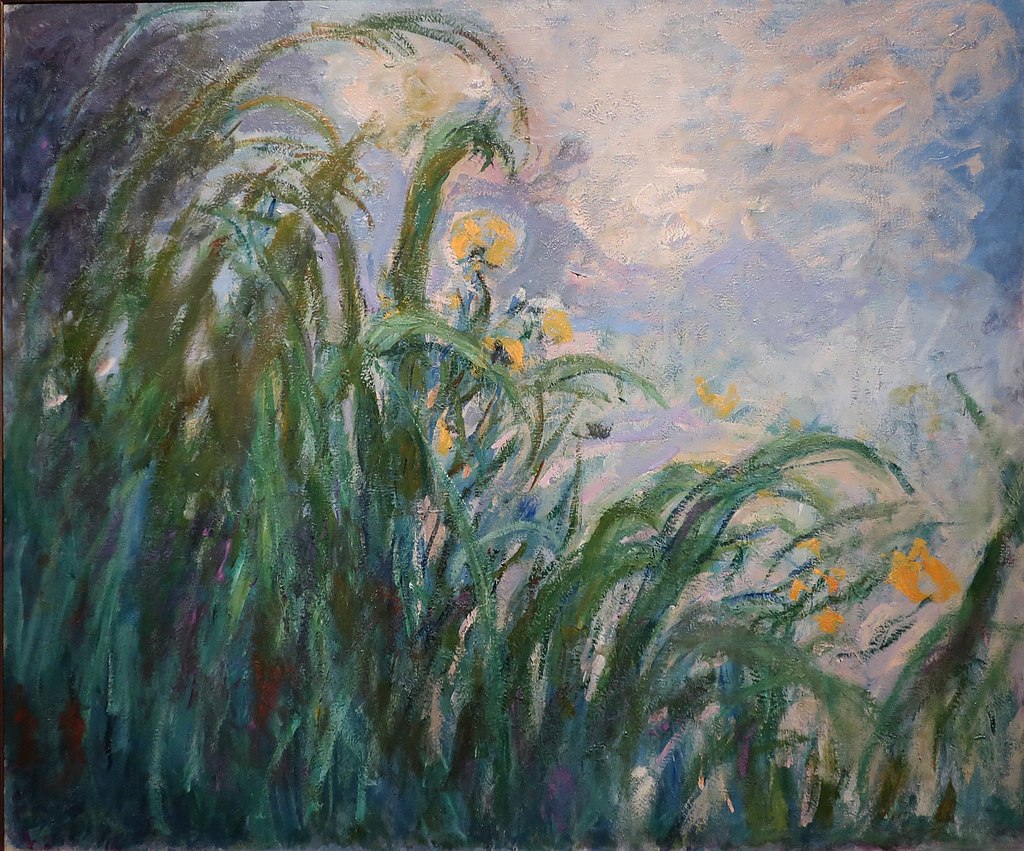 Monet first rented a house and gardens in Giverny in 1883. The house was situated near the main road between the towns of Vernon and Gasny.

As Monet’s fortunes improved with his increasing success, his painting sales, Monet was able to buy the house, the surrounding buildings, and the land for his gardens in 1890.

Monet’s family help to develop the gardens, and Monet built a greenhouse and a second studio. As Monet’s art sales grew, his garden grew and evolved.

In 1893 Monet purchased additional land with a water meadow and began a large landscaping project, which included lily ponds. Claude Monet was the garden architect and eventually hired seven gardeners to help him.

White water lilies local to France were planted along with imported cultivars from South America and Egypt, resulting in a range of colors including yellow, blue, and white lilies that turned pink with age.

Yellow Irises by Claude Monet is the result of his years of garden design driven by his fascination for color and light.

Day Lilies by Claude Monet represent a range of Lilium plants, which is a herbaceous flowering plant growing from bulbs, all with large prominent flowers. Lilies are important in culture and literature in much of the world.

In the English Victorian Symbolism, lilies portray love, ardor, and affection for loved ones, while orange lilies stand for happiness, and love.

Lilies are the flowers most commonly used at funerals, where they symbolically signify that the soul of the deceased has been restored to the state of innocence.

Lilium longiflorum, the Easter lily, is a symbol of Easter, and Lilium candidum, the Madonna lily, carries a great deal of symbolic value in many cultures. 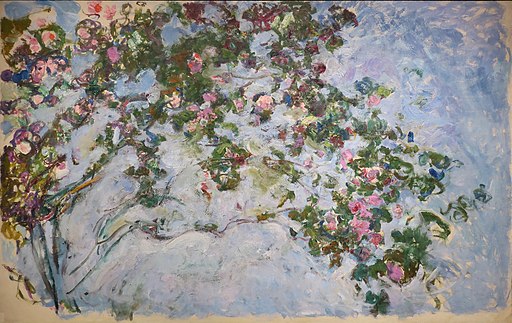 Roses by Claude Monet are similar to the Monet french shrub rose which produces large blooms all over the bush. Each flower has different swirls of darker and lighter slashes of pink and cream.

This french rose is bred by Delbard and has a pleasant perfume and has been named after Claude Monet. 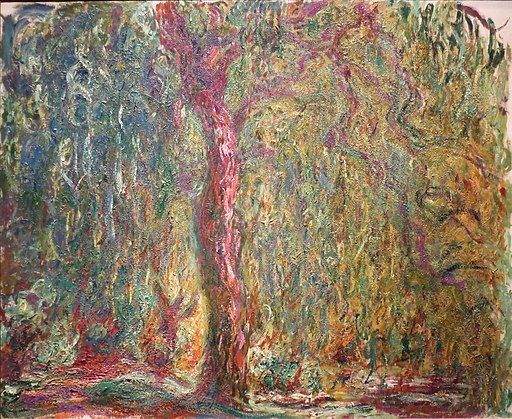 Weeping Willow, by Claude Monet, depicts a Weeping Willow tree growing at the edge of his water garden pond in Giverny, France. This painting is one of a series of Monet paintings of this Weeping Willow.

Monet had painted ten Weeping Willow paintings by 1919. These paintings were his mournful response to the tragedy of World War I.

During the war, Monet’s gardens at Giverny were emptied of the people he knew as his family and household staff, was called into service or moved away from the advancing German army.

Monet could hear artillery fire during the war, but he refused to leave, preferring to share the fate of his gardens. Shadowy and writhing forms characterize the Weeping Willow paintings, express his grieving mood.

Monet is known for having produced a series of paintings, in which all the versions consist of the same subject and perspective. Examples include his series of the “Valley of the Creuse” series and his famous series of “Haystacks” and “Water Lilies” paintings.

A visit to Claude Monet’s garden at Giverny

Highlights of the Musée Marmottan Monet

Monet painting in his garden in Giverny, France

A Tour of Paris Museums and Historic Sites