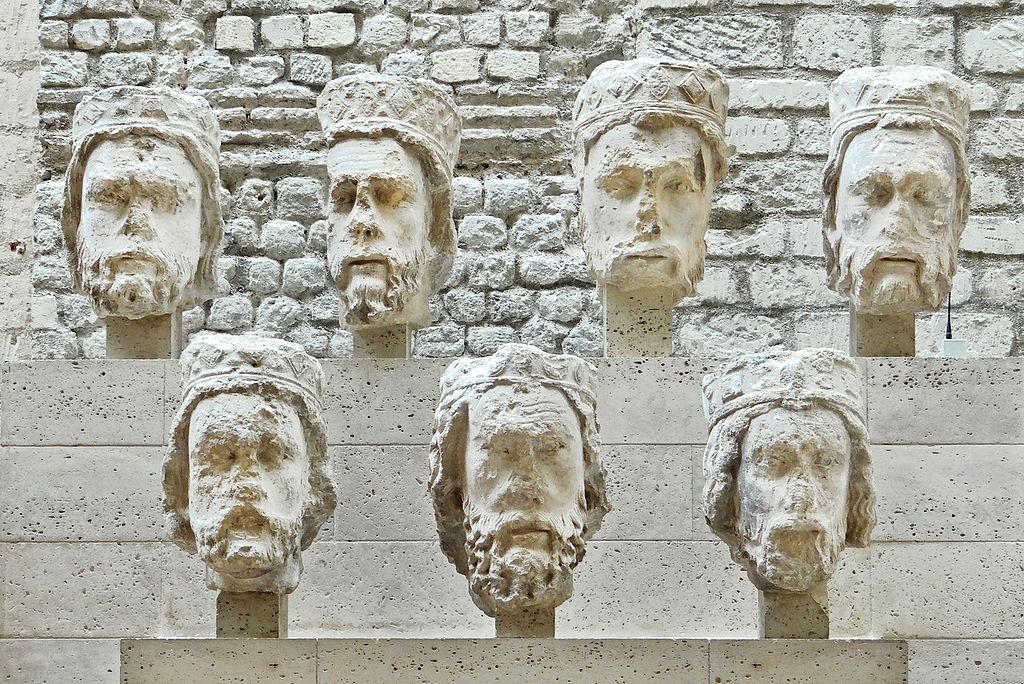 Decapitated and Guillotined Heads from Notre-Dame

The west facade of Notre-Dame de Paris is adorned with statues of twenty-eight Kings of Judah. Unfortunately, the heads of the original figures were decapitated during the French Revolution.

In 1977, 21 of those 28 original heads were unearthed and are now on display along with other fragments from the cathedral’s portals.

In 1793, the same month that Marie Antoinette was beheaded, a Paris mob collected in front of Notre Dame Cathedral and cried for the heads of more kings.

The sculptured figures, dating back to 1230, above the portals of the Cathedral, represented the kings of Judea.

Unfortunately, the mob, thinking they were French kings, tied rope around the statues, pulled them down and guillotined them in the square in front of the Cathedral.

The figures were replaced in the early 19th century, but the original sculptures disappeared.

Two hundred years after the king’s heads had disappeared, workers were working at a building site discovered twenty-one of the heads.

They also found three hundred other statuary fragments buried within a wall of plaster in underground foundations.

For over 500 years, these faces had witnessed Paris history from their perch on Notre Dame Cathedral. Then they disappeared for 200 years.

Today we can once again see the original “Heads of the Kings of Judah” and reflect on the lesson of history and hysteria.

Notre-Dame de Paris, which means “Our Lady of Paris,” also known as Notre-Dame, is a medieval Catholic cathedral on the Île de la Cité in Paris, France.

The cathedral is considered to be one of the finest examples of French Gothic architecture. The rib vault and flying buttress’s innovative use allowed for the enormous and colorful rose windows to set it apart from the earlier Romanesque style.

On 15 April 2019, the cathedral caught fire and suffered significant damage, including the roof’s collapse and the central spire and substantial damage to the rose windows. Plans are underway to rebuild.

Relics stored in the cathedral include the supposed crown of thorns that Jesus wore before his crucifixion. Also, a piece of the cross on which he was crucified, a 13th-century organ, and stained glass windows.

During this time, many of the treasures of the cathedral were either destroyed or plundered. The twenty-eight statues of biblical kings, mistaken for statues of French kings, were beheaded.

All of the other giant sculptures on the facade, except for the Virgin Mary figure on the portal of the cloister, were destroyed.

For a time, the Goddess of Liberty replaced the Virgin Mary on several altars, and the cathedral came to be used as a warehouse for the storage of food and other civil purposes.

In 1801, the new ruler, Napoleon Bonaparte, signed an agreement to restore the cathedral to the Church. It was the location of Napoleon’s coronation as Emperor on 2 December 1804, and of his marriage to Marie-Louise of Austria in 1810.

The Heads of the Kings of Judah

“To taste the sweet, you must taste the bitter.”
– French Proverb