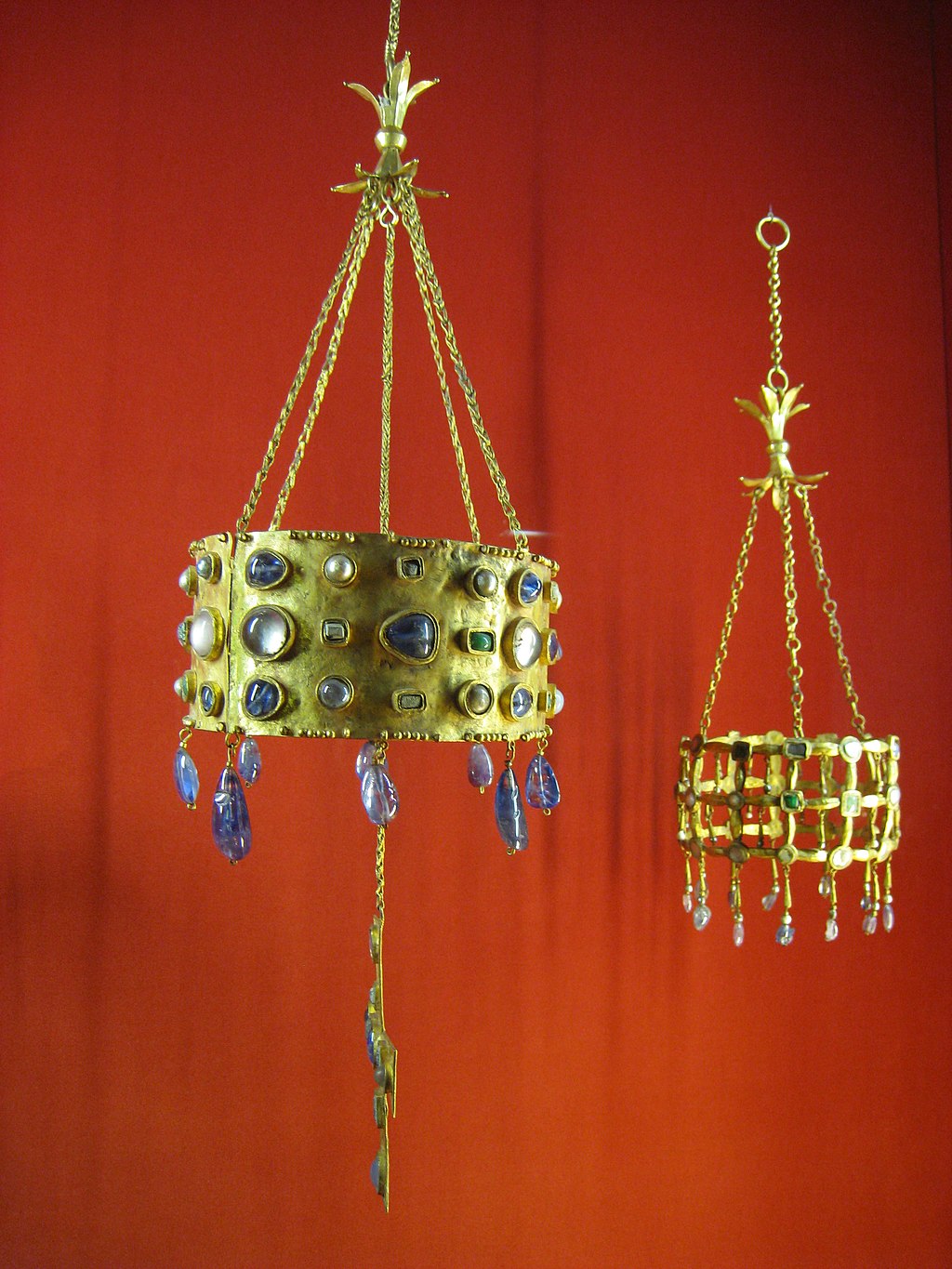 Between 1858 and 1861 in an orchard called Guarrazar, in Guadamur, very close to Toledo, Spain, an archaeological discovery was made of twenty-six crowns and many gold crosses.

The crowns were “votive crowns.” A “votive offering” is when one or more objects are displayed or deposited in a sacred place for religious purposes.

A “votive crown” is a votive offering in the form of a crown, made of precious metals and adorned with jewels. In the Middle Ages, they were designed to be suspended by chains at an altar, shrine, or religious image. 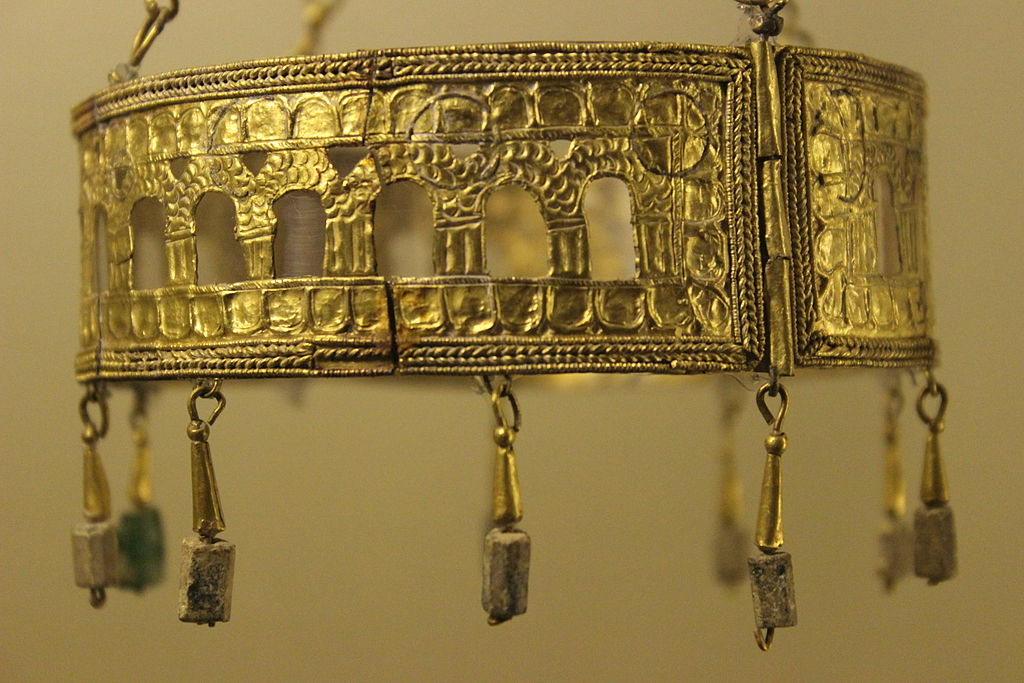 The jewelry found at Guarrazar is part of a tradition of Iberian metalworking. The Visigothic works were influenced heavily by the Byzantines and German styles.

The crowns were purely Byzantine in form and were gifts to the church, to be hung above the altar.

Orthodox Christians continue the practice of making votive offerings to the present day. Often in the form of metal plaques symbolizing the subject of their prayers.

Many will leave something of personal value, such as jewelry or awards, as a sign of devotion.

The “Treasure of Guarrazar” was buried about 711 when the Berber-Arab troops of Tarik ben-Zyad invaded the Spanish peninsula.

The votive offerings probably came from the churches across Toledo, the capital of the Christian kingdom, and were buried for safekeeping in the face of invasion.

The treasure was divided between museums and countries, and much has disappeared.

Some of the objects went to the Musée de Cluny in Paris and the rest of the armories of the Palacio Real in Madrid (today in the National Archaeological Museum of Spain).

In 1921 and 1936, some items of the Treasure of Guarrazar in Spain were stolen and had disappeared.

Today the collections are distributed across the following museums, consisting of:

The Visigoths were the western branches of the nomadic tribes of Germanic peoples referred to as the Goths. These tribes flourished and spread throughout the late Roman Empire.

The Visigoths emerged from Gothic groups who had invaded the Roman Empire beginning in 376.  The Visigoths invaded Italy and sacked Rome in 410.

After the Visigoths sacked Rome, they began settling down, first in southern Gaul and eventually in Hispania, where they founded the Visigothic Kingdom and maintained a presence from the 5th to the 8th centuries AD.

The Visigoths first settled in southern Gaul and established their kingdom with its capital at Toulouse. In 507, their rule in Gaul was ended by the Franks. The Visigoth kingdom was then limited to Hispania.

A small, élite group under various Visigoth Kings came to dominate the governance of the region at the expense of those who had previously ruled there.

During their rule of the Kingdom of Hispania, the Visigoths built several churches that survive. They also left many artifacts, which have been discovered in increasing numbers by archaeologists in recent times.

Many Visigothic names are still in use in modern Spanish and Portuguese.

In 711, a force of invading North African Moors defeated the Visigoths and their king, and many members of their governing élite were killed, and their kingdom rapidly collapsed.

It was during this turbulent period that Treasure of Guarrazar was buried for safekeeping and to be retrieved at a later period. Unfortunately, the treasure was not recovered until it was discovered over one thousand years later.

“You must not run after two hares at the same time.“
– French Proverb